Why was Independence Day in America established on July 4?

July 4 is the date that the Declaration of Independence was ratified. Why was that the date chosen for Independence Day, rather than any of these dates (not to the exclusion of others; these just seem equally or more plausible than July 4):

So why pick on July 4, when there are so many other dates they could have chosen?

All facts are from here and here.

You answered your own question in the very first line. That is because the US declaration of Independence was ratified/approved on 4th of July. What you say is correct, the declaration itself was voted on by Congress on 2nd of July.

You are also correct that John Adams thought 2nd of July would be the most memorable day in American history as he wrote to his wife in a letter:

The Second Day of July 1776, will be the most memorable Epocha, in the History of America.

While the resolution for independence was passed on 2nd July, it wasn't finalized until 4th of July. The Congress edited the existing proclamation, moderating it and doing grammatical edits before sending it to press in order to explain the move to the public. The five men committee responsible for that included John Adams, Roger Sherman, Robert Livingston, Benjamin Franklin and Thomas Jefferson. They took out extremist assertions which could harm American interests by alienating Sympathizers in British public (Such as Britain enforcing slavery on the Colonies), shortened the text, improved sentence structure etc. Then finally on 4th July, the act was finalized, adopted and sent to print.

So essentially, the answer is paperwork. Technically, the real Independence Day is 2nd of July however, It took the Congress two more days to adopt a finalized statement and send it to print. Which is why the date that appears on the declaration is 4th of July, not the second. See the original declaration below and notice the date: 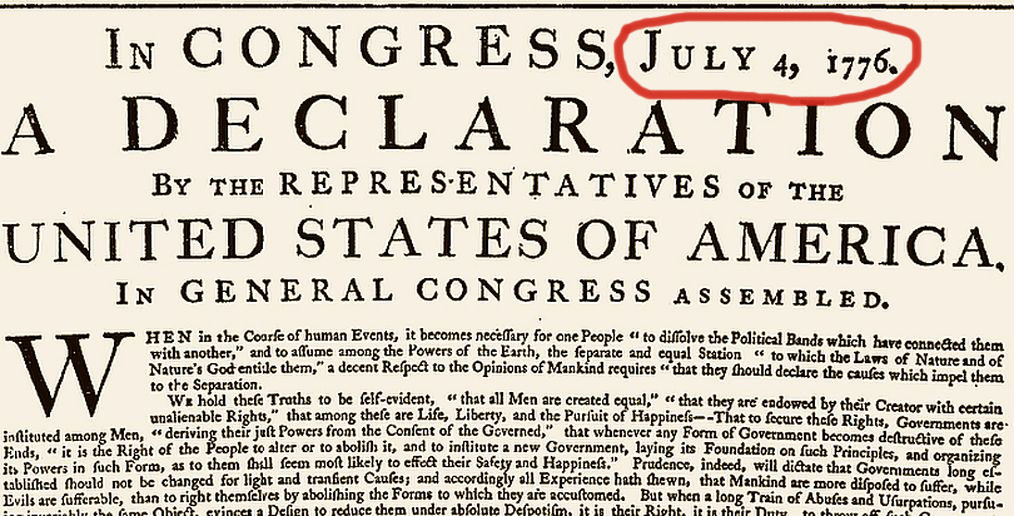 Then it was made formally de-jure when Congress passed a law in 1870 to make Independence Day a federal holiday, using the date 4th of July, thereby making it legal and official.

NSNoob's answer addresses the dating of the Declaration of Independence well enough. My answer will touch on why early July 1776 was distinct from the other dates in your post.

The disagreement between colonials and the British had already resulted in shots fired and battles fought in the previous year, such as Lexington in April of 1775, Bunker Hill, the seige of Boston (April 1775 - March 1776), Knox and Arnold's successful raid and artillery haul from Fort Ticonderoga in mid-1775, and so on.

Despite all of this action, it was not yet definite as to whether this was an armed insurrection, a civil war between Britons, or an outright split. Indeed, the thought of colonial independence from the Crown had been generally unthinkable despite the couple decades of disputes, scuffles and high-minded statements made leading up to 1775 (The Glorious Cause: The American Revolution, by Middlekauf). After all, statements of independence was still treason during this period and there was still a close (and yet also distant) relationship between Britain and the colonies during this time.

Political movements and some public sentiment gained traction by 1776 to specifically address how this relationship between Britain and the colonies now stood, and the Declaration of Independence was the result. The Declaration was the Official Notice from the colonies to the Crown that they were now independent. With that statement made, there was little chance of going back without serious repercussions, since the Continental Congress was now liable for high treason.

The later victories during the Revolutionary War defended that notice of July 4, 1776. It took even longer to form the first government and evolve it into the government we generally recognize today. But it was that date when the irrevocable Official Notice was served, and that focused the colonial's desired outcome for the rest of the Revolutionary War.

Independence was declared in July, 1776. That was a political act that basically superseded other days connected with the war and peace, such as October, 1781, or January, 1783.

The main choice of dates was between July 2, 1776 and July 4, 1776. The first date was the one on which the "heavy lifting" was done, and that's why John Adams expected that to be Independence Day. But it was on July 4, 1776 that the declaration was ratified, that is "signed, sealed, and delivered." Put another way, that was when it became "official."

Not the answer you're looking for? Browse other questions tagged united-states american-revolution or ask your own question.