Did Roman unmarried men have a preferred hand and finger for wearing their seal ring?

I have read that, generally, Roman men during the Empire would wear only one ring at a time. For instance here: http://m.tribunesandtriumphs.org/roman-clothing/roman-jewelry.htm

An unmarried one would wear a seal, but was there a standard for which hand and which finger to wear it on? It is my impression that when it was about marriage or religion, they went for the fourth finger of the left hand, as they believed the "vena amoris" (a term coined in the 17th century, they were actually thinking of a nerve) was the only vessel that connected fingers to the heart. For example Tiberius, who was after all left-handed according to Suetonius, thus displays a ring in his bronze portrait as the Pontifex Maximus: 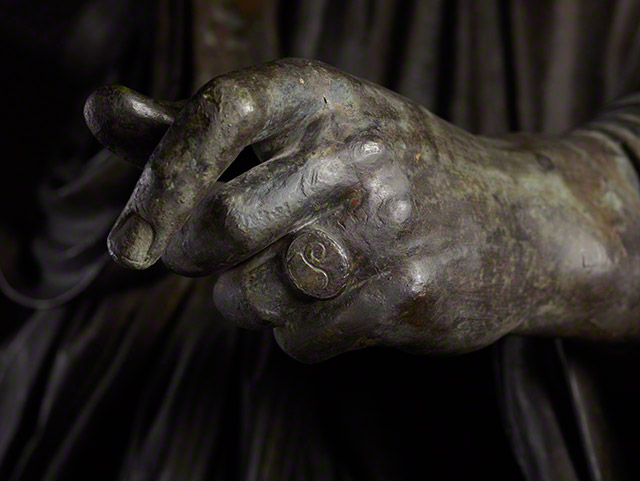 I couldn't find sources for how seal rings were worn. I would guess the hand depended on your left- or right-handedness (or maybe shaking hands with the right one had implications), and perhaps the finger was the index or middle one.

Or perhaps there was no standard?

Pliny the Elder wrote about wearing finger rings in volume 33 of his Naturalis Historia. He states:

"The worst crime against mankind was committed by him who was the first to put a ring upon his fingers: and yet we are not informed, by tradition, who it was that first did so."

So he clearly wasn't a fan of finger rings!

However, having made that point, he goes on to say:

"Whoever it was that first introduced the use of rings, he did so not without hesitation; for he placed this ornament on the left hand, the hand which is generally concealed, whereas, if he had been sure of its being an honourable distinction, it would have been made more conspicuous upon the right."

And if any one should raise the objection that this would have acted as an impediment to the right hand, I can only say that the usage in more recent times fortifies my opinion, and that the inconvenience of wearing rings on the left hand would have been still greater, seeing that it is with the left hand that the shield is held.

From there he goes on to discuss how rings came to be introduced to Rome.

Pliny the Elder answers the question. The hand part was quoted by @sempaiscuba, here is the finger part:

It was the custom at first to wear rings on a single finger only, the one, namely, that is next to the little finger; and this we see the case in the statues of Numa and Servius Tullius. In later times, it became the practice to put rings on the finger next to the thumb, even in the case of the statues of the gods; and more recently, again, it has been the fashion to wear them upon the little finger as well. Among the peoples of Gallia and Britannia, the middle finger, it is said, is used for this purpose. At the present day, however, among us, this is the only finger that is excepted, all the others being loaded with rings, smaller rings even being separately adapted for the smaller joints of the fingers. Some there are who heap several rings upon the little finger alone; while others, again, wear but one ring upon this finger, the ring that sets a seal upon the signetring itself, this last being kept carefully shut up as an object of rarity, too precious to be worn in common use, and only to be taken from the cabinet as from a sanctuary. And thus is the wearing of a single ring upon the little finger no more than an ostentatious advertisement that the owner has property of a more precious nature under seal at home!

(Too long for a comment, so posting this as an answer.) The rules on how to wear seal rings vary quite a bit nowadays, and likely reflect the fact that they weren't universal in the past either.

FWIW traditional French conventions (in French) are as follows:

The convention has a further twist depending on whether your marital status:

For comparison, the same page and its German counterpart offer that:

I would add as an aside that the wedding ring finger isn't universal either. Where in Western Europe it usually is the left finger insofar as I'm aware, it is the right finger in Hungary and, I believe, Russia and Greece.

Either way there certainly were conventions. I couldn't locate the specific convention(s) the Romans were using, but sempaiscuba's suggestion (left hand ring finger) seems sane in light of the above. (It's almost tempting to speculate that the sex/status rule might have been introduced by the French at some point between Charlemagne and William the conquerer, with the marital status symbolism following at a later point.)

19
How much of an impact did the Roman emperors' civil wars have on their decision to debase the coinage?
15
What status and rights did a Roman freedwoman have?
10
Did some Roman/Pompeiian houses have atria for slaves?
44
How did the ancient Romans count with their fingers?