Identify the era or any other clues from this soldier's picture?

I am going through my parents' photo box and found this. I don't think it's a relative. Right breast says "Ritchie" and it looks like left says "USARMY". The marking on the back says "Myself at Iujin-ni," or something like that in cursive handwriting, then it says "Grid 064953".

Is this a photograph of an American soldier in Japan? Can anyone tell me the era? Or any other clues that might help me get this photo to the person or family? 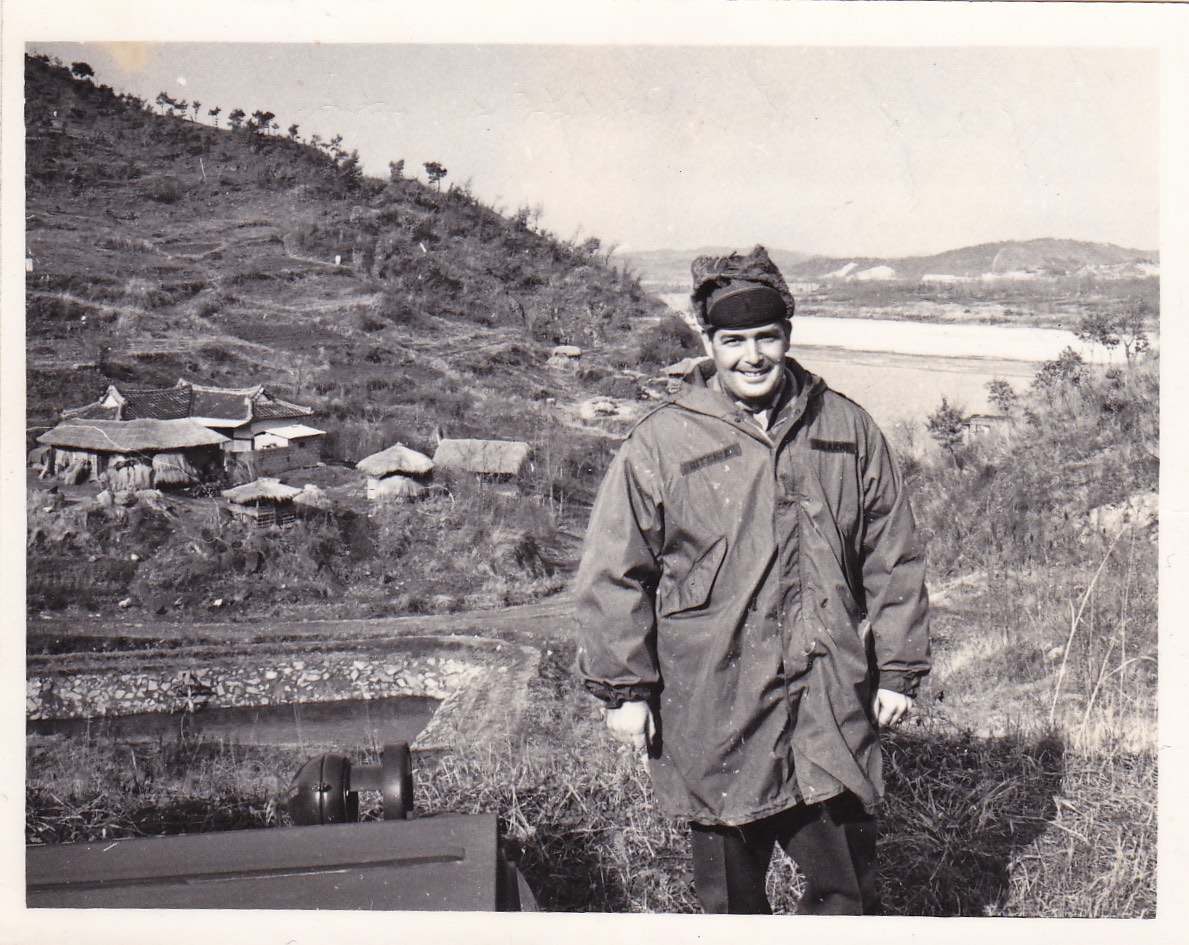 My thoughts so far:

Standardized nametapes weren't a thing in the Army until at least the mid-50s, I believe, so this photo was taken after both the Korean War and the occupation of Japan ended. The shapka and parka imply a colder climate, and that plus the architecture of that house (note especially the curved roofline) means my best guess is that this was taken in Korea.

This guy's clothing is pretty interesting- he's got an army-issue parka, but quite nonstandard headgear and what appear to be pressed dark trousers. It's possible that he's wearing the old green service uniform under the parka, but then he should be wearing a tie, which I don't see evidence of. Maybe an off-duty staff soldier on a tour of the countryside? Hard to say, given the available info.

Edit: I think I found the location referred to- 064953 is near the NE corner of a 100k grid square, so I checked the MGRS map for Korea, and there's one square with the NE corner near the DMZ. I figured that was the likeliest candidate, so I checked it out, and 064953 is right next to a town called Imjin-ri, in a hilly area overlooking a river. It's not 100%, but I bet that's the spot.

In the bottom left of the image you have what appears to be the "blackout driving lamp" that you might have found on the Willys MB, or "Jeep". However the bonnet of the vehicle doesn't look right for the MB. Stepping through the successors to the MB, you come to the M151, which has the same front-to-back ridges found in the photo and an overall shape that bears a strong resemblance. According to the wiki article, these first entered production in 1959 and first saw service in 1960.

Three major variants of this vehicle were produced, the M151, M151A1 and M151A2, with the only differences that might have been visible in this photo being the indicator lights. It is hard to be certain, but I believe that from this high angle, with so much of the blackout driving light visible, even the smaller indicators of the M151A1 should be visible. The A1 was introduced in 1964.

I would suggest that this puts the photo somewhere between 1960 and 1964 plus however long it took for the newer models to filter through. Exactly how long that might take is just guesswork. Although this window places the photo during the Vietnam War, American involvement was not yet at its peak in 1964 (16,000 troops vs. the peak of half a million in 1969), and was at the beginning of a substantial "ramping up". The US presence in Korea in 1964 was substantially higher, but fell over the same period. With evenly distributed upgrades, the number of M151A1s in Korea might have exceeded the number of M151s by about 1965. However, if priority for new equipment was given to forces operating in Vietnam, then the A1 might not have arrived in Korea until several years later.

Conclusion: Probably early-to-mid sixties, possibly later, but unlikely to be earlier than 1960.

The parka he's wearing looks similar to an M51 Fishtail parka (more here), which is based on the parka issued by the US army during the Korean War:

The parka issued during Vietnam seems to have had an extra two pockets.

That's pretty close to the border, and there probably would have been a lot of fighting along the river.

According to this map, on page 93, there was a little ferry there that crossed the river: https://s3-ap-southeast-2.amazonaws.com/awm-media/images/collection/pdf/RCDIG1027585--1-.pdf

So I guess he was waiting for the ferry... Personally I wouldn't cross into a war zone unarmed, alone, and with a big smile, so I agree with it being a little after the war.

Little chubby, big ring, dark trousers, doesn't look like he's about to fight anyone, I think he could have been a chaplain, or something like that, coming in to help after things have calmed down.

Individual features could match... You need to flip his face for the ears to match...

7
Where is the location shown in this picture on a modern day map?
4
Were any other members of the Kennedy (Political) family affected by Addison's disease?
11
What is this crime, "F and A", from the 1890's US?
12
What kind of radio equipment is depicted in this Vietnam era picture?
3
Can anybody please identify the military uniforms in this these photos?
0
Have there been any other US presidents besides JFK that were groomed from birth to be president?