What is the date of this photograph of a woman riding a horse sidesaddle?

The goal is to establish the date of this photograph 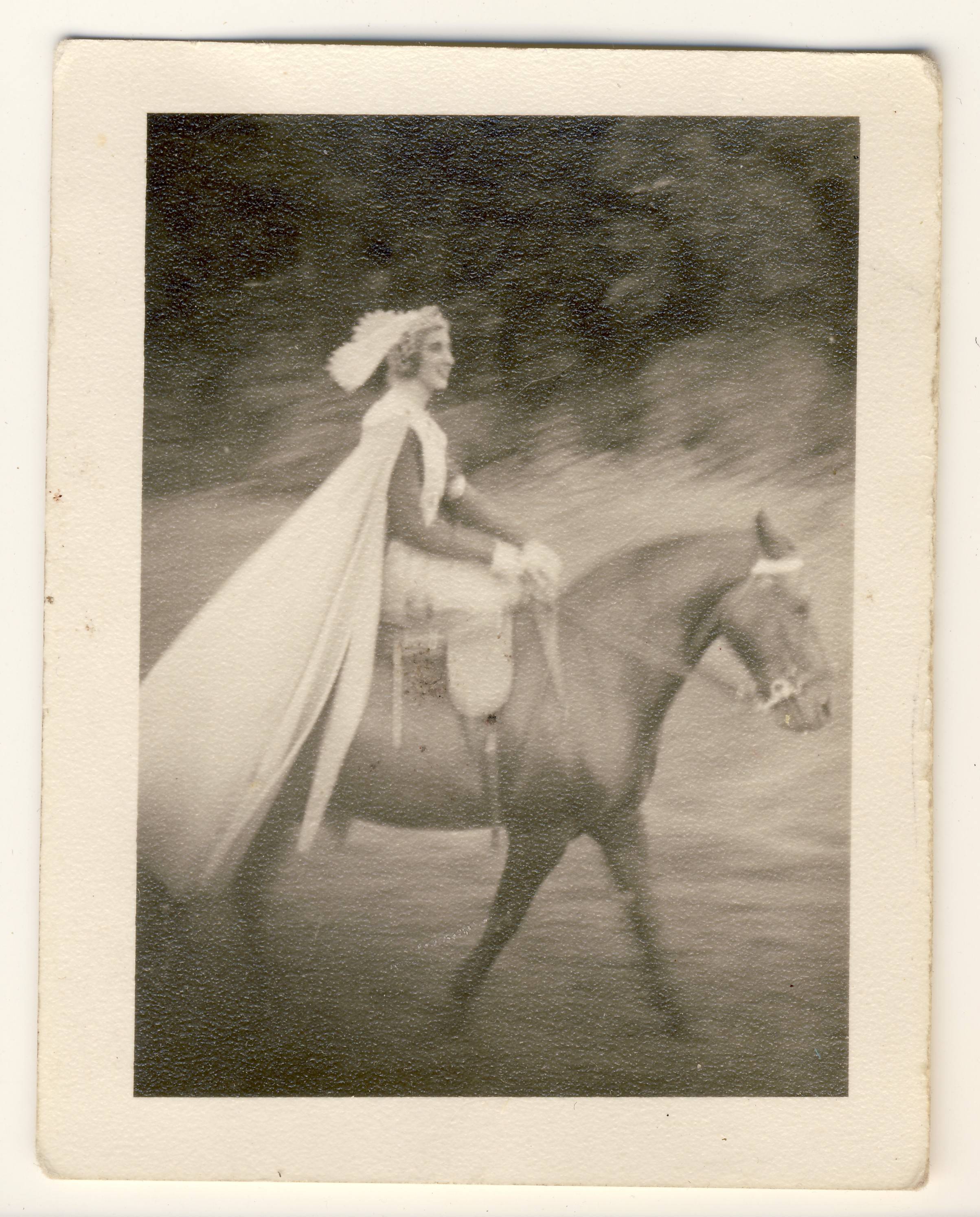 (Image of a woman riding a horse sidesaddle) - lots of context here, but the goal is the date. The reverse of the photograph 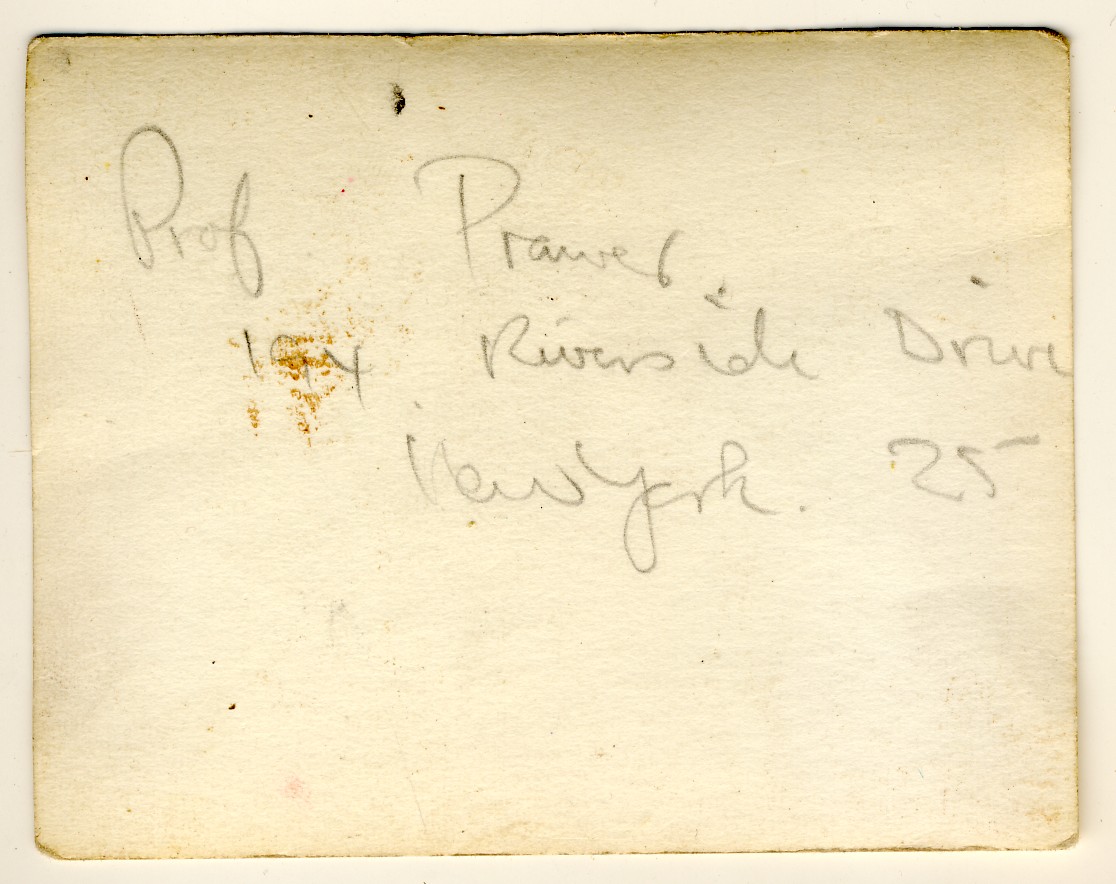 We1 have done reverse image search on google and we own a very large library of similar images that we've already searched.

The address is this building. The address is an apartment building, so property records are going to be difficult to research, and relatively lower in reliability. (If it were a privately owned dwelling we could consult property records; apartment buildings are not required to keep records, the records tend to involve less details and are less likely to be available to the public.) At @DCook's suggestion we reviewed the 1940 census for that address; there was only one person living in the building whose name began with a P (or a J) Unfortunately 1940 appears to be the last census available.

The woman is in costume and the costume is reminiscent of the 1920's, but the tack indicates that image cannot be prior to 1947. The strap hanging off the back side of the saddle should be attached to a balance girth; the fact that it isn't indicates that the tack (and the image) is post-war. (Trust her on this, she is an expert).

We're going to use the leyshon.pdf resources to analyze the print technology next. (Second hat tip to @DCook)

Preliminary research out of the way, on to the original question.

Does the "25" provide a clue to the date of the photograph?

If on the other hand, NYC postal zones were always 3 digits, then we have a curious anomaly that may help us to further date the photograph.

Obviously the image was not shot at the address.

I will award a bounty if anyone were able to identify Professor Praner (?) is.

1 My professional historian girlfriend and I. She is an internationally known and respected expert on both sidesaddle and on the type of images we're discussing - her expertise on these images is based in part on her personal catalog of several thousand images. She teaches both sidesaddle and the history of sidesaddle. She has been invited to present at multiple venues on the topic and her most recent paper on the subject has been accepted for the Costume Society of America.

The number 16 was the zone number; this address was in postal zone 16 within the city of Minneapolis. This number followed the name of the city and preceded the name of the state, and was not used in small towns having only one post office.

When ZIP codes were introduced, in most cases the zone number became the last two digits of the ZIP code. Thus the address above became this:

I remember those days myself, as a child, in the early 1960s, for Pittsburgh Pennsylvania, where I then lived. Long story short, people didn't "abbreviate" a five digit code to two digits. They expanded a two digit code to five. (It has since been expanded to nine.)

The third digit would subdivide the zones further, so "100" might refer to "downtown" Manhattan.

Finally, the last two digits referred to the existing postal zones in use within each city or suburban area. In most cases, the city and state , e.g. Minneapolis, MN would define the first three digits, and it was just a matter of finding the remaining two-digit zone within each city (or suburban or rural) area.

The "fly in the ointment" was that some cities, e.g. NYC, had more than one "third" digit, so the zones were not enough to be clearly identifiable in a situation where NYC could be represented by both "100" (e.g. Manhattan) and "101" (Brooklyn-Queens). So if you wrote "New York, New York 16, the letter could end up in either place (10016 or 10116). That's why, after a brief experiment with two digit zone numbers, people were taught to use the whole five digit zip code.

As another poster pointed out, the zip code started in 1963 when the five digit zip code replaced the two digit city zone. I still remember television commercials from the mid to late 1960s explaining the information presented above.

I think you are looking for Siegbert Salomon Prawer who was a professor.

His sister Ruth Prawer Jhabvala moved from India to Manhattan in 1975 (http://www.telegraph.co.uk/news/obituaries/culture-obituaries/film-obituaries/9970277/Ruth-Prawer-Jhabvala.html)

I hope it helps

Not the answer you're looking for? Browse other questions tagged women new-york or ask your own question.

14
To what degree did women participate in the air war during WW2?
11
Who was the oldest woman to give birth in the Medieval Europe that we know of?
3
What was the social condition of a pregnant single woman in the late 1970s in England?
14
What education was required for a woman to become a teacher in pre-WWII Germany?
11
Did Jeanne d'Arc really tell a woman that she couldn't serve on the battlefield?
5
What's the most ancient known example of a woman challenging feminine gender roles?
8
What were women doing at the Battle of Dorylaeum during the First Crusade?
2
Who was the first woman to be made a god by Rome's senate?