How was President Andrew Jackson able to eliminate U.S national debt in 1835?

How was President Andrew Jackson able to eliminate U.S national debt in 1835?

The US national debt, as a percentage of the economy, was rather minuscule at the time compared to what it is today, so the two situations and their takeaways aren't really comparable:

Mostly he was elected when it was about to happen, and didn't stop it.

If you look at the history of US Debt vs GDP, you'll see a fairly clear pattern of event-based upward spikes (colored blue below), followed by periods of slow decline (colored red). 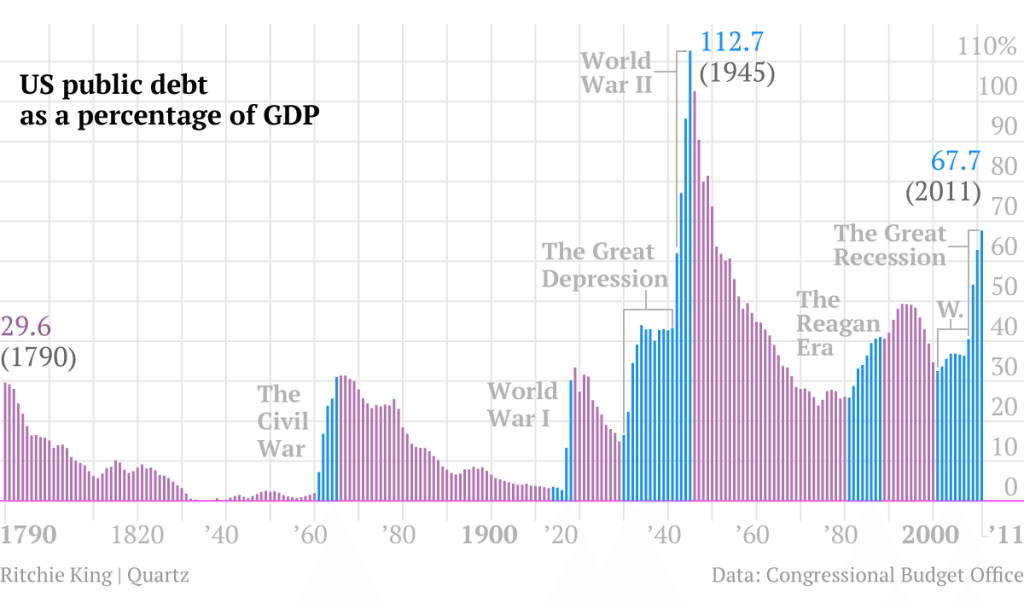 Looking this over, its pretty easy to spot the big drivers. All of them are sudden spikes coincident with either wars or big money-supply-induced recessions, with two exceptions: the Reagan Era, and the presidency of George W. Bush.

In every case (with those two exceptions) the debt percentage dropped slowly towards 0 until the next spike hit.

Jackson in particular happened to be voted into office right near the 0 point. You could give him credit for not using the occasion to go on a Regan/Bush style spending spree*, but that's probably all the credit he really deserves.

* - I distinctly remember the talk during the early Bush (II) administration that we were on a trajectory to effectively pay off the debt for the first time since WWII. Rather than let that happen, a very large tax cut was passed, as well as a pretty big Medicare drug expansion. Then the Great Recession came along and blew everything out of the water...

Jackson was able to do this because he wanted to. "Where there's a will, there's a way." Although he built on the accomplishments of his predecessors.That would be a good lesson for today's U.S. government,which seems to lack the will to do anything.

But as Denis' excellent graph points out, it was not hard, because Jackson inherited a small debt, held mostly by foreigners. He paid it off because he didn't want them interfering with his plans described in the next paragraph.

In pursuing his "pet" project (pun intended), the so-called "pet banks", Jackson was pursuing the "Jeffersonian" model of a decentralized economy and banking system. This was in contrast to the "Hamiltonian" model of a strong central government, including a strong central bank. One of Jackson's claims to fame was his fight with banker Nicholas Biddle over this matter. Jackson's victory set back the creation of the U.S. Federal Reserve Bank by 80 years (from 1833-1913).

The "pet banks" were high on the wish list of Jackson's key supporters (many of them got to be presidents of these small banks). I don't know if he actually did this, but I can easily imagine him telling them, "Help me clean up the national debt, and I'll give you the banking system you want."

The "mechanics" are described here.

6
Did the U.S economy flourish after national debt was eliminated by President Andrew Jackson in 1835?
2
What Was the US Debt-To-GDP Before Jackson Was President