Why didn't Japan adopt the widespread use of western style utensils during its periods of westernization? For contrast Thailand seems to have done this during its efforts to westernize. Without evaluating the merit of these methods, I find it rather curious that they adopted so many other habits and fashions but then skipped this one. And yes I know that they are used, but not in a widespread everyday fashion.

It is really hard to eat Japanese, Korean, and Chinese food with a fork and spoon

China, Japan, and Korea serve formal meals "family style" in small pieces. Family style means that the food is served in the middle of the table, and everyone eats together off the same plate. The small pieces will break apart if you pierce them with a fork, and eating them is awkward with a spoon. A chop stick, on the other hand, can easily grab a single small item and bring it to your mouth without making a mess.

For example, look at this sushi plate: 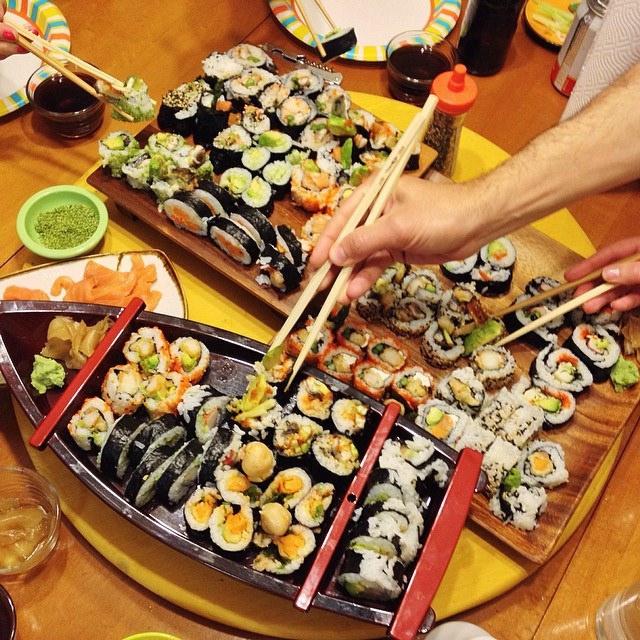 It would be really hard to pick up an individual piece of sushi with a fork or spoon. Chopsticks, however, make it easy to pick up a single piece and eat it.

Essentially, to convert Japan to a forks culture, the whole cuisine would need to change. And if I've learned one thing, it is that people generally don't like to switch foods - they yearn for the food they grow up with.

First of all, the question is based on an incorrect assumption: the Japanese actually widely use Western utensils (fork, spoon, knife). This is generally missed because of the context.

The long answer is that everyday Japanese food consists of food of very different origins, and utensils often follow accordingly. Generally, food of Japanese and Chinese origin generally eaten with chopsticks, spoon, and food from Western origin is eaten with spoon/knife/fork. It means that at home people have both sets and they choose according to the dish.

Keeping chopsticks for Japanese/Chinese food is rather practical. For example, rice is an important part of Japanese kitchen, and cooked Japanese rice is rather sticky, hard to eat with fork. As others also mentioned, food is often cooked in small pieces, so chopstick is just handier. This is the same for noodles, where long, slippery pieces of noodles are much easier to eat with chopsticks. Some dishes with clearly western origin like kara-age and tonkatsu (fried chicken and pork) are also generally eaten with chopsticks, and they are cut into small pieces.

On the other hand, if you try Japanese curry (very popular dish, originally introduced through the Britts), you always got it with spoon. Not the Chinese soup spoon, but a western spoon. Similarly, if you order a pasta dish, you generally get is served with fork and spoon. You may dismiss it, but pasta or curry is a very common food in schools, cafeterias and at home, not only in restaurants. Even the Japanese Navy has its own curry recipes (https://www.saveur.com/article/recipes/japanese-battleship-curry).

I do not know about cutlery especially, but it might have a thing to do with Japan's mentality and history. Japan, unlike many european and asian countries, is very careful of the influence of foreign countries and is willing to keep their heritage intact, and are also quite racist (as a general rule). Also, the country remained closed to foreigners, except for some very specific portuguese and dutch traders, for a very long time ; it started to westernize (carefully) quite late, and was barely westernized before WW2. The westernization itself was forced by the US during the 19th century. You should probably watch Bill Wurtz's history of japan, on Youtube, it seems like a joke video but it's actually quite accurate.

Oh, and finally, the way they cut their meals make it so you do not need forks or knives once it is served. This, plus the fact the country remained closed a long time, and their tendancy to be defiant towards foreign tools might be an explanation.

Tl;dr : not really useful to them ; country remained closed for a long time ; they are defiant towards foreign stuff.

Not the answer you're looking for? Browse other questions tagged japan food meiji-restoration or ask your own question.

93
Why didn't Imperial Japan attack the Soviet Union during World War 2?
17
Why didn't Japan expand into Ezo?
8
Why didn't Russia and Japan sign a peace treaty after WW2?
9
Did Perry's Black Ships attack Edo harbour during his expedition to Japan?
13
What were the effects of Bushido on Japan after the Meiji Restoration?
37
Why didn't Japan take Pearl Harbor when they had the chance?
7
In WW2, why didn't Japan invade Macau?
1
The diversity of human eating utensils
14
Why did WWI include Japan?