When is the Cumaean Temple to Apollo dated?

Cumae was founded by Ionians from Euboea around 750. Cumae had a Temple to Apollo and Sibyline oracle that channeled Apollo. In Greece, Apollo and its oracle became active in the eighth century. It wasn't a pan-Hellenic god, however, until after the Lelantine War (c. 720-650)

When was the Cumaean temple to Apollo created? Would it have been the religion of the founding Cumaeans, or did it come at a later date?

I will throw something more into the question for fun. What happened to the temple of Apollo in Oscan Cumae c. 421-338?

There are two temples at Cumae which have been associated with Apollo, an upper one and a lower one.

The latter, which is the one your question appears to refer to, is the more definitely identified but there is no established early date as "facts and finds are deficient". The earliest likely date would appear to be late 6th century BC. 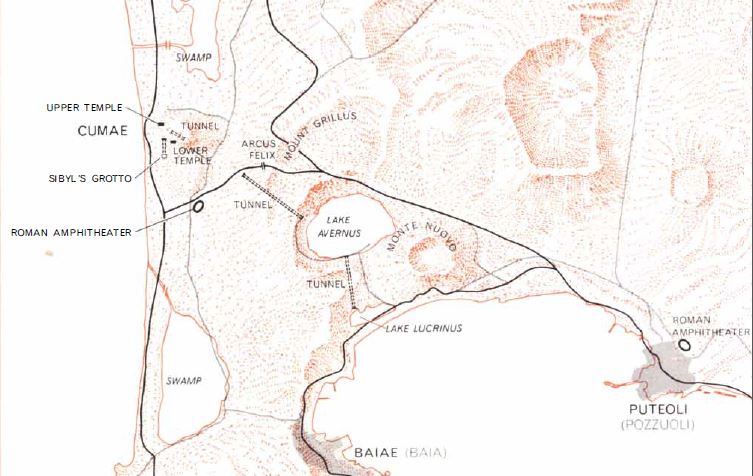 The oldest phase of the temple, in light of the research conducted so far, dates back to the end of the 6th century BC: its base is made of square blocks of tuff.

Although there is no physical evidence that it was dedicated to Apollo at this time, it seems to be generally accepted by scholars that the dedication dates from this time or perhaps several decades later. There was further construction during the 5th century and major reconstruction was done during the time of Augustus (the temple itself was demolished). Later, it was turned into a Christian basilica. Consequently,

Many questions bedevil the interpretation of finds, of construction periods, orientation, and associated cult buildings....

In a review of Cuma e il suo parco archeologico. Un territorio e le sue testimonianze (1996), A. G. McKay notes that the authors devote 20 pages to the lower temple, and summarizes the Apolline cult and sanctuary as follows:

Common sense suggests that the cults of Apollo, Demeter and Hera dawned with the Euboean settlement*(1)*. However, finds recovered from a votive deposit, along with a 7th century ВС bronze oracular disk (103), suggest that Hera may have had priority at Cumae....If true, and facts and finds are deficient, Apollo's primacy was probably indebted to Delphic (or Delian?) influence and to Aristodemus (2), Cumae's 6th century tyrant. De Jorio' s find of a Roman dedicatory base in 1818 identified the Apollo temple.

Note 1: The author dates the founding of the colony to circa. 730 BC.

That there was construction work done on the temple at the time of Aristodemus is tentatively confirmed by the style of a fragment of a clay statue which has been dated to the mid to late 6th century.

The "Temple of Jove"...(but Temple of Apollo" would be a reasonable alternative) on the upper terrace. Excavated between 1924 and 1932, the 6th century ВС temple, oriented east-west, proved to be a long narrow sekos, with adyton, and with painted terracotta revetments. The Greek building was probably dismantled during the Samnite era.

There does not appear to be any physical evidence saying to whom this temple was dedicated. The reference by Virgil to two sites for Apollo, one high and one low, has seemingly lead some scholars to suggest that the (higher) temple previously attributed to Jupiter may in fact have been for Apollo.

On the temple of Apollo in Oscan Cumae c. 421-338, when the city was captured

Cumae suddenly ceased to be a Greek city at all; it became Campanian in government, language, customs and population, although many Greek women remained and most of the Greek buildings survived. A new Samnite temple was built at the foot of the acropolis. An Oscan inscription survives from the temple of Apollo above the Sibyl's cave, showing that the Greek cult was to some extent retained.

Not the answer you're looking for? Browse other questions tagged ancient-history ancient-greece italy greek-mythology religious-history or ask your own question.

8
Are there any records of ancient people looking for the misdirect in a prophecy?
1
When and where, exactly, did the concept of a male god eating grapes orginate?
14
When did Greek historians stop believing Greek mythology to be historical fact?
4
Is the Western Wall the only remaining portion of the Second Temple?