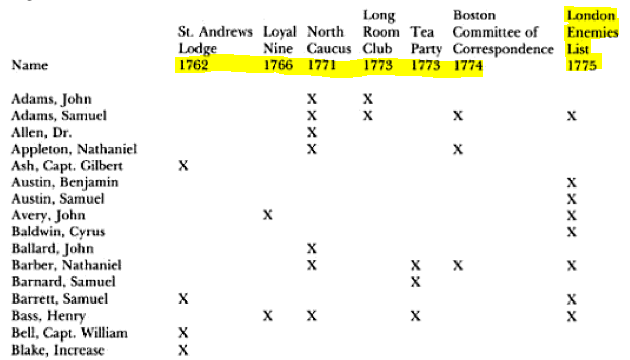 This London Enemies List 1775 has come up in American Revolutionary War research regarding Paul Revere and other revolutionaries. I believe it is a document of some sort and find a referenced source (picture above) in David Fischers book Paul Revere's Ride written in 1995.

The London Enemies List seems to be compiled by Tories who put names of Loyalist rebels on a list.

Im not sure why it has a date next to it either, was there multiple versions released each year? Was this a private list or something released in a newspaper in London or America?

Basically: what is the document that says they are on this list?

The London Enemies List seems to have been a list of 59 men who were considered to be a danger to the crown. I found a couple of sources that suggest the list was drawn up by London Tories, but these both use David Fischers "Paul Revere's Ride" as their source.

The table in the question is reproduced in full in this paper. The footnotes to the table state that the original document containing the "London Enemies List" is held in the collection of the Massachusetts Historical Society.

A transcript of the document has been published (although this lists 63 names, rather than the 59 quoted in the paper referenced above). The document is dated 18th April 1775.

The online transcription notes that the original document was gifted to the Massachusetts Historical Society by the Hon. C. F. Adams in 1869.

The list is also one of several datasets that were used to demonstrate how metadata could be used to analyse social networks. The others are political organisations and clubs in the Boston area of which Paul Revere was a member. Most of these datasets seem to also be headings on the table you referenced.

Rather than using current data about living people, the authors decided to use lists of groups from the Revolutionary War to illustrate how effective this metadata could be in analysing social networks, and identifying potential "terrorists in the American colonies". With tongue firmly in cheek, the author observes:

Rest assured that we only collected metadata on these people, and no actual conversations were recorded or meetings transcribed. All I know is whether someone was a member of an organization [sic] or not. Surely this is but a small encroachment on the freedom of the Crown’s subjects. I have been asked, on the basis of this poor information, to present some names for our field agents in the Colonies to work with. It seems an unlikely task.

The reason I mention this is that the article includes links to the datasets used (i.e. the lists of names of people in those groups) on GitHub, which might be of use to you in your research.

It appears to be a club in Boston and the date I'm guessing is the year the membership list was taken from.

Paul Revere was able to spread the alarm so effectively because he had played a key role earlier in the Boston Tea Party. He was also a member of several clubs in the Boston area, including the London Enemies List, the North Caucus, and the Long Room Club.

The "London Enemies List" was a list of people connected to Revolutionary Paul Revere. It may have been a self-proclaimed list (e.g. through a club) or one compiled by Tories (possibly through "club" information).

It was Malcolm Gladwell, author of the "Tipping Point," who perhaps first explained why Revere was so influential in the Revolution. It was because he was a so-called "Connector" who knew (and influenced) a lot of the key people. Gladwell pointed out that Revere was much better connected, and hence far more effective, than Samuel Dawes, who rode the same night, took a different route, and roused far fewer people to arms. Revere is celebrated for his "ride," when it might have been more appropriate to celebrate his "connections."

You can see the list of Revere's acquaintances in the far right column, and how most of them were involved in other trigger events leading to the Revolution. In essence, we are now using modern data science to analyze history. Such "cluster analysis" is now also being used to analyze networks, and (supposedly) being used to fight terrorism. For instance, if we know that a certain "paymaster" who funded the terrorists of "9/11" recently transferred large sums of money to persons X, Y, and Z, we would look at those three people as likely incubators of the next terrorist act.

Not the answer you're looking for? Browse other questions tagged 18th-century american-revolution or ask your own question.

29
What were the reasons that the British colonies in North America rebelled but not others?
29
Why are the signatures on the United States Declaration of Independence structured as they are?
10
What impact did the Seven Years War have on the American Revolution?
6
What percentage of the population in the Thirteen Colonies in 1776 were first/second generation immigrants?
10
Why was the Declaration of Independence handwritten, rather than printed with a printing press?
3
Who lived on Golden Square in London in the 18th century?
3
What started the American Revolution?
25
Was it possible for a message from Paris to reach London within 48 hours in 1782?
3
Did Hamilton really send Burr an "itemised list of thirty years of disagreements"?
7
How to find the population and mortality in London during the period 1760-1834?