Why weren't the Egyptians attacked on sight in the ancient Battle of Megiddo?

In 1457 BC, Thutmose III and his army had to pass the mountains to reach Megiddo. He had three passes he could go through, one in the North, called Jokneam Pass, and another pass in the South, called Dothan Pass.

The enemy army was stationed at the end of these 2 passes, right behind the mountain. So Thutmose III decided to take the third (and most risky) pass through the middle of the mountains, called the Aruna Pass. This route would take him through the mountains and directly to the south of Megiddo itself. 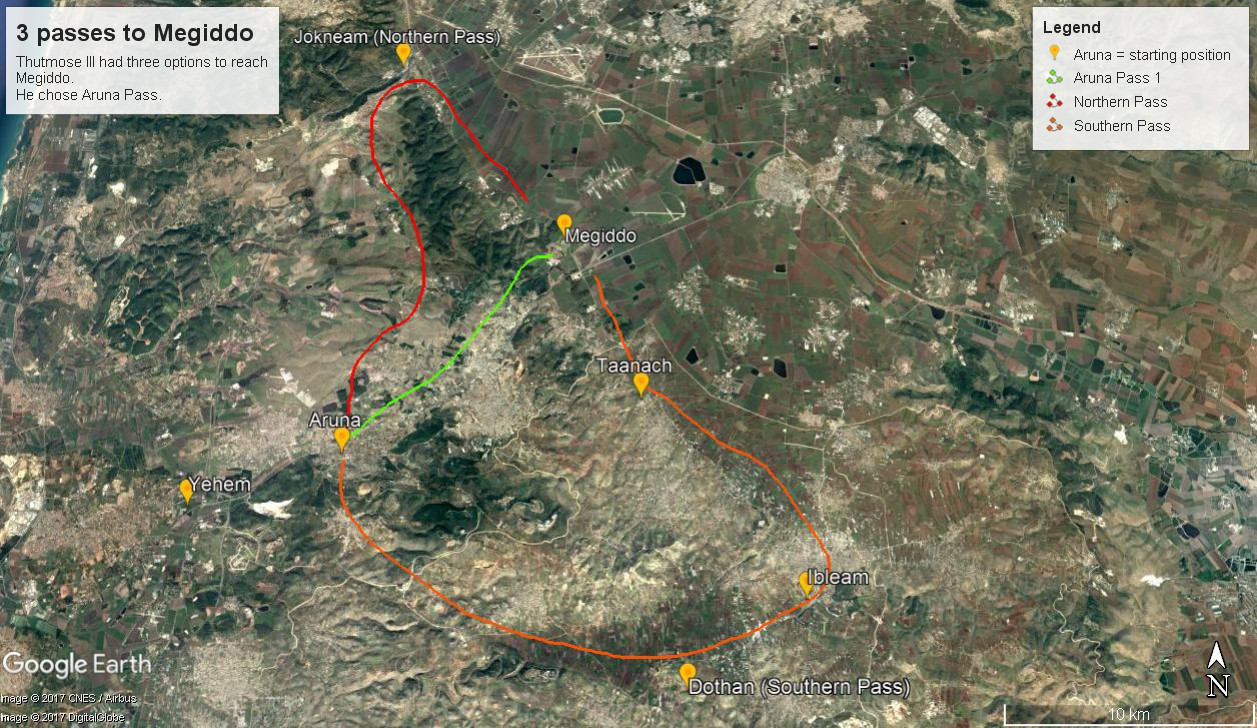 Thutmose III's scribe said that the pass was so difficult and so tight that they had to disassemble the chariots and carry them with them and that in some areas the troops had to walk in single file. 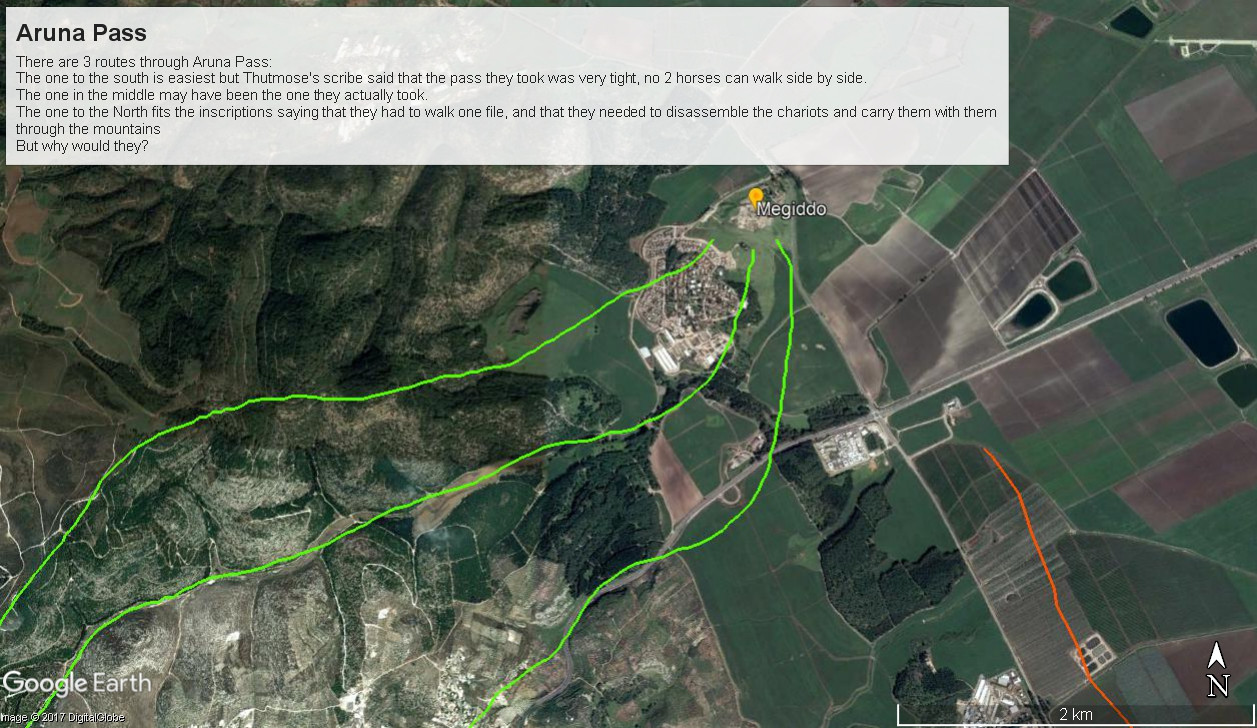 In any case, no matter what route Thutmose III's army took, there was an empty space between where they emerged from the pass and Megiddo of, at most, 2 Kilometres (1.2 Miles). 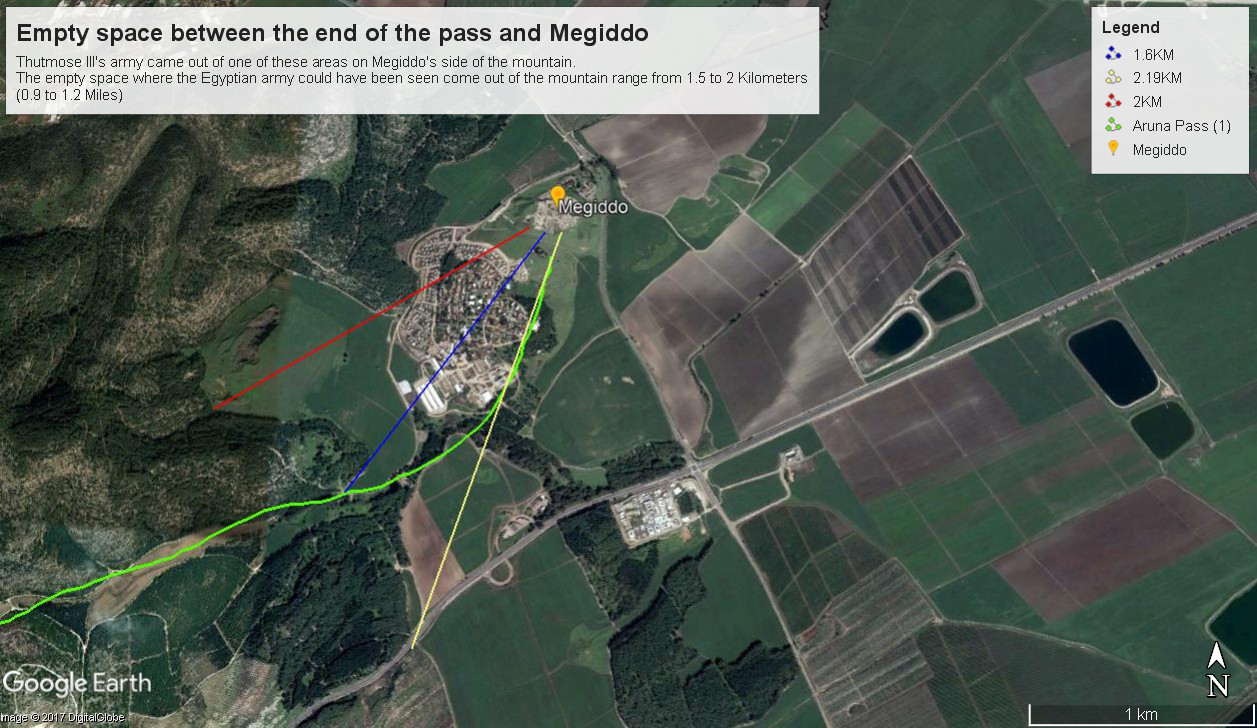 How come Thutmose III's army was not seen by the people in Megiddo? The Egyptian army took 7 hours for the last man in the army to pass the mountain!

Although the Battle of Megiddo is often described as "the first recorded battle of military history", the truth is that we only have the Egyptian account of the battle. Clearly, that account is unlikely to be completely impartial. We cannot know what wasn't recorded, and so we have to speculate about many of the details - particularly as regards the actions of the King of Kadesh and the armies of Megiddo. However, with that caveat in mind ...

What do we know about how events transpired?

As you say, Thutmose III took the route that passed through the Aruna Pass. When he emerged at Aruna (the area now called Wadi Ara) with his army, Thutmose could see how King Durusha of Kadesh had arrayed his forces. He had infantry units guarding the roads at Djefti in the north and Taanakh in the south. His chariots were deployed in the centre near the city of Megiddo itself.

Given this deployment, we can infer that Durusha had intended for Thutmose to attack the infantry units when he emerged from either the northern or southern route. The infantry could then feign retreat, and the Egyptians would presumably pursue them. This would split Thutmose's forces and leave them vulnerable to a massed attack by Durusha's chariots.

Whatever King Durusha's plans had been, they were effectively nullified by Thutmose taking the Aruna pass route. The Egyptian forces would have needed to rest after such a long march. Darusha's forces were fresh, but in the wrong place to attack Thutmose. Thutmose established his camp as we know from the record, and his army prepared for battle the following day.

Presumably Durusha spent whatever daylight remained redeploying his forces in preparation for an attack on Thutmose's position the following day.

We know that on the following morning Thutmose found himself facing the Cananite army of Megiddo. This army consisted mainly of men from the upper classes who had trained from a very young age. Most came from warrior families and were held in high esteem. They were well armed, having a sword, spear and shield, and they were highly skilled in using these weapons.

Rather than waiting for Darusha to get all his forces in place, Thutmose launched a pre-emptive attack.

For all their strengths, it seems that the army of Megiddo lacked a unified command structure, and that was probably a major factor in why they broke so quickly under Thutmose's attack.

At this point, the Egyptian army stopped to plunder the Cananite camp. This kind of behaviour was normal in battles in the ancient world. However, this delay in pressing home the attack on Megiddo allowed the town to reorganise its defences, and what could have been a swift victory became a siege which lasted some seven months.

For more detail, see The Battle of Megiddo and its Result, or the sources listed below.

1 - Did the rebels really not leave any garrison behind?

Obviously we can't know for certain, but it seems likely that any garrison left in Megiddo would have been relatively small. King Durusha needed his forces in numbers in the field, ready to attack Thutmose. Any garrison remaining in the town would probably have been far too small to offer any effective resistance to the Egyptian army.

2 - How did the citizens and the people inside Megiddo itself not see the Egyptian army?

It is reasonably safe to assume that they sent messengers to King Darusha and his commanders to warn them that Thutmose wasn't where they had expected him to be.

3 - Why did the Egyptians set up camp?

Ancient battles were almost never fought at night. Even moving large forces at night was unusual. The Egyptian army had just endured a long march and would have been tired, while Darusha's forces were fresh, but out of position.

As the inscription states, the Egyptian army could use the time to prepare for the battle the following day, which they did.

Q: How come Thutmose III's army was not seen by the people in Megiddo? The Egyptian army took 7 hours for the last man in the army to pass the mountain!

Answer: Apparently, it was 12 hours. They weren't seen because there was no one guarding the middle pass (because it was unlikely Thutmose would use this pass, the most dangerous).

Q1- Did the rebels really not leave any garrison behind?

Answer: Nope, unless you count old men, women, and children.

Q2- How did the citizens and the people inside Megiddo itself not see the Egyptian army? Knowing that Megiddo is located on top of a hill, so they could have easily seen the army from the comfort of their homes.

Answer: No idea - can't figure out the topo just from the image. Let's also remember this was about 3,500 years ago ... who knows what the landscape was like then. Finally, weather, sun-light, etc. could be factors too (But I'm guessing - have no data/info).

Q3- So After 7 hours for the last man in the army to go through the mountain, they actually camped there. How come?!

Answer: I believe they were looting camps of the Canaanite rebels. Not camping as such.

The source of the answers provided should be evident in entire paragraph below, taken from Eric H. Cline's "1177 B.C.: The Year Civilization Collapsed", Princeton, 2014, Chapter 1, EGYPT AND CANAAN AT THE BATTLE OF MEGIDDO, 1479 BC:

His generals, according to the written account, suggested that they take either the northern or the southern route because these were wider and less susceptible to an ambush. Thutmose replied that such tactics were exactly what the Canaanites would be expecting; they would never believe him to be so stupid as to go up the central route since it was so narrow and vulnerable to an ambush.

And yet, precisely because that was their thinking, he would indeed march with the army up the central route, hoping to catch the Canaanites by surprise, and that is exactly what transpired. It took the Egyptians nearly twelve hours to get through the central pass (known, at various times throughout history, as the Wadi Ara, the Nahal Iron, and/or the Musmus Pass) from the first man to the last, but they got through without a scratch and found nobody guarding either Megiddo or the temporary enemy camps surrounding it. The Canaanite forces were all at Yokneam to the north and Ta’anach to the south, just as Thutmose III had predicted.

The only mistake that Thutmose III made was in allowing his men to stop to loot and plunder the enemy camps before actually capturing the city. This was an error that allowed the few defenders of Megiddo—mostly old men, women, and children—time to close the city gates. This in turn resulted in a prolonged siege lasting seven more months before the Egyptians were able to capture the city.

Finally, as Wikipedia entry of this battle states, the date of this battle can be different from the one you've provided (1457 BC). This battle given by Cline is dated 1479 BC.

Not the answer you're looking for? Browse other questions tagged ancient-history ancient-egypt battle or ask your own question.

7
Which fortress east of Ancient Megiddo did Thutmose III go to during the siege?

30
Where did Hannibal cross the Pyrenees?
3
Were ancient Egyptians secretly monotheistic?
2
What did the ancient Egyptians think of Khufu?
7
Which fortress east of Ancient Megiddo did Thutmose III go to during the siege?
25
What is the oldest road tunnel in the world?
12
Did ordinary people during Hatshepsut's reign know she was a woman?