When was the concept of the "border wall" between the United States and Mexico first proposed?

The current American president Donald Trump has become notorious for (among other things) championing the idea to build a 18+ foot concrete wall across the entire US/Mexican border. Where did this concept originally come from? A news article I read some time ago (which frustratingly I can't find right now) dating back to Bush Sr.'s term commented on the development of some sort of river extension project which would 'incidentally' serve as a moat and garnered a protest from the Mexican government at the time, so developing a large barrier is not an idea unique to the 2016 political landscape, but I'm curious if that project in the '90s was the first real attempt in this direction.

The earliest date that any massive building project somewhat similar in scale to Donald Trump's wall, whether a wall, ditch or moat, was proposed would be sufficient to answer this question.

For "bonus points", if this idea came up regularly in US history, when did it first become politically or socially unpopular (rather than being merely viewed as impractical)?

Physical barriers along the US-Mexico border have been erected at various points since at least 1918. Most of these, though, were short and often not maintained. The first major proposal to put up a barrier along several areas of the border was in the late 1970s during the Carter administration, the controversial Tortilla Curtain, but the proposal was scaled back after protests. A more permanent structure went up in 1991 during the Bush Sr. administration.

The idea of an actual physical barrier along the US-Mexico border is not a new one, but Mexican immigrants in the first half of the 20th century were, for the most part, welcomed for the much needed cheap labour they provided. Further, much of the border was no more than a line on a map, and in some areas an uncertain one at that. Nonetheless, there were exceptions, the first of note apparently being Nogales on the Arizona - Mexico border where a shootout in 1918 left at least 24 dead.

After peace was restored, both governments agreed to build a two-mile border fence running along the center of International Street, the first of its kind in the area. 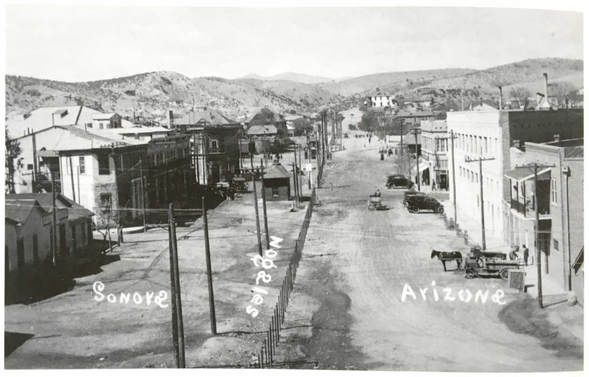 The fence put up after the battle. Source: The August 27, 1918 ​Battle of Ambos Nogales and the First U.S.-Mexican Border Fences

During the Great Depression, there was less tolerance of immigration; witness 1936 in south west California:

Civilian Conservation Corps members began building a “high, barbed-wire fence strung on metal poles set close together” going west from Tecate, the intention of which was to join an apparently similar and already existing fence that began at the Pacific Ocean and went all the way to the Marone Valley, about eight miles west of Tecate.

This supposed fence of over 50 miles was either never completed or was simply not maintained as, in 1948, an INS official in San Ysidro observed “At present time, with no fence worthy the name [sic], it is very easy for any alien who is turned back at the port…to cross within a short distance of the port.”

Sometime before the early 1950s, in El Paso, Texas

the U.S. erected a menacing series of barbed-wire fences and watchtowers, reminiscent of the totalitarian European states of the World War II era. The watchtowers were eventually removed, but the fences remained. Their purpose was not only to keep out Mexican immigrants, but they were also used to halt the spread of livestock diseases and discourage the traffic of contraband.

In the 1940s, fences went up in Arizona, but these were to control the movement of Mexican cattle rather than Mexican people, the concerns being overgrazing and the spread of disease by hoofed animals. In Nogales, Arizona, little changed over the following decades according to this Mark Binelli report in Pacific Standard:

Well into the 1980s, border security in Nogales remained nominal. Several longtime residents I met recalled the sagging chain-link border fence running through town, easily slipped beneath if there happened to be a long line at the customs booth. "Prior to 1995, there were gaps all over the fence," confirmed Tony Estrada, the sheriff of Santa Cruz County

This was despite an increase in strong rhetoric from individuals such as former CIA director William Colby who considered Mexican immigration to be a bigger threat than the Soviet Union. Others, such as LA Police Chief (1969–1978 ) Ed Davis and California Senator (1967-77) George Deukmejian also weighed in but little happened. Although polls in the 1970s showed an increase in public concern at the level of immigration, only cattlemen seemed concerned enough to do anything in terms of a physical barrier:

Disinterest in boundary enforcement issues is reflected in a 1975 report on efforts to repair the boundary fence, which attributed the source of the effort to the San Diego Cattlemen’s Association as it was worried about its members’ cattle wandering into Mexico.

Then, in 1977, President Jimmy Carter announced major measures aimed at decreasing the number of illegal immigrants. Included in this was an increase for the Border Patrol which, during the Carter years, led to the Tortilla Curtain

In 1977 and 1978 the U.S. Congress approved funding for even more fencing in El Paso and other densely populated locations along the Mexican border between Texas and California. These new fences, which were to be strewn with razor wire to deter unwanted Mexican immigrants from entering the country, were referred to collectively as the “Tortilla Curtain.”

Mexican officials and those who resided near the border lashed out at the United States Immigration and Naturalization Service (INS)... Protests and riots ensued as groups such as the Coalition Against the Fence were formed and demanded more compassion from the United States government. The use of razor wire to deter illegal immigration was considered inhumane and was relatively ineffective.

These protests proved to be successful along with a meeting that took place in February 1979 between U.S. President Jimmy Carter and Mexican President José López Portillo to discuss easing tensions along the border. Final construction of fencing was limited in its total length and lacked the razor wire. 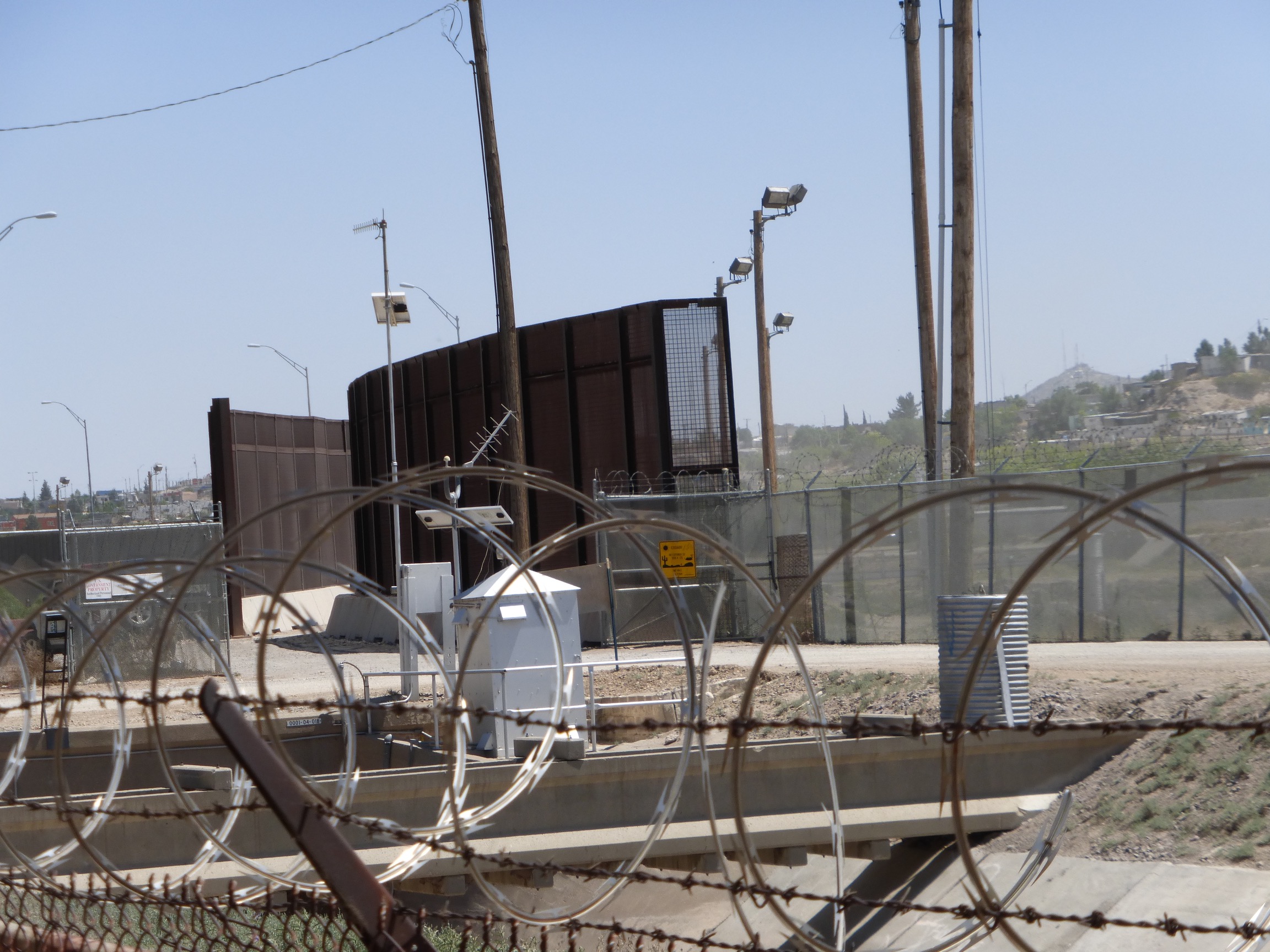 "The black fence in the background — known as the "Tortilla Curtain" — was built in 1979 in an effort to keep immigrants out of El Paso." Source: The Southwest

...the Carter administration proposal evolved to include two six-mile steel fences (essentially walls) between San Ysidro and Tijuana, and El Paso and Ciudad Juárez... many in San Diego, including members of its U.S. Congressional delegation and the San Diego City Council, opposed the new fence on the grounds that it was unnecessary, would prove to be ineffective, and would hurt U.S.-Mexico relations.

support for the fence was apparently not well organized nor mobilized....When a new fence was eventually built, it was neither sturdier nor any more difficult to scale or cut than the one it replaced. Within one year, there were at least twenty large holes—some large enough for a truck to pass through—in the four miles of already-completed new fencing

Ronald Reagan specifically rejected fences during a 1980 Presidential election debate with George Bush Snr. Reagan enacted a huge amnesty program in 1986 for illegal aliens at the same time as greatly increasing funds for border control, with much emphasis on high-tech equipment and increasing the number of agents and little emphasis on physical barriers. The focus now was the War on Drugs (a term first used by Nixon in 1975), but it’s impossible to separate immigration from this.

Despite the Tortilla Curtain incidents, the 1990 Immigration Act during the Bush Sr. presidency “allowed funds from increased penalties to be used for repairing, maintaining, and constructing border barriers” and

In 1991, the U.S. Navy built a 10-foot high wall of corrugated steel between San Diego and Tijuana using surplus military aircraft landing mats. The wall stretched for seven miles along the border in the Chula Vista sector (in 1993 it was expanded to 14 miles, extending into the Pacific Ocean) and marked a momentous upgrade from the chain-link fences that had previously demarcated the border.

This, essentially, was the background to Operation Gatekeeper which was a long way from being the first attempt to construct a physical barrier; rather, it was a continuation of sporadic attempts over many decades to control immigration by putting up a physical obstacle.

Trump’s plan to put a wall across the entire US – Mexican border does seem to be a first from a major political figure. Not even conservative Republican presidential candidate Pat Buchanan, during his runs for President in 1992 and 1996, proposed such a plan.

Commentary: The futility of a Mexico-United States wall

Up Against the Wall

10
What were the key differences between United States' and Indian revolutions?
24
Was the concept of religious freedom in the early United States applied to native American faiths?
7
Who was the first member of the United States Senate to resign?
6
Why didn't the United States occupy Baja California during the US-Mexican war?
14
How long did it take mail to get between Madrid and Mexico?
1
When was the property tax introduced in early Mexico? Who paid?
3
When was the potato introduced to Mexico?
9
Was California's request for a Mexico border fence from the Pacific Ocean to the Colorado River acted upon?