Why were there no increases in the train speed records between 1854-1934?

I and a couple other people were doing some stuff with some speed record data. Organizing the data, making some graphs, etc.

While doing the train speed records, though, we noticed an oddity. For some reason, there's an 80 year gap between when one record was set - 1854 - and when it was broken - 1934. The records go:

This... doesn't really match the distribution for the rest of the records. 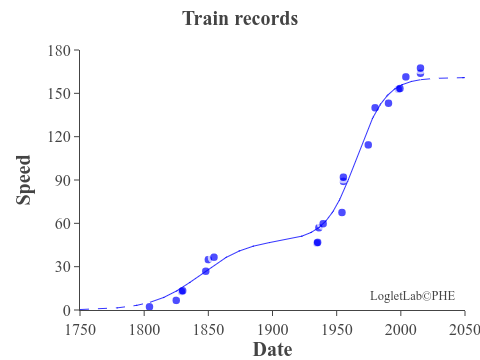 (speed is in meters per second)

So, being curious, I'm wondering: Why was there no increase in the speed record for 80 years? Was there no new technology being developed?

This website suggests that it was competition from the growing aviation industry that spurred development of higher speed trains in the 1930's.

There also are inferences in OP's site link that advances in track technology were the driving factor in the higher attained speeds starting in the mid-1930's; not advances in the locomotives themselves. Note that the frequent mention of the test track specs starting in 1934.

I think it's a combination of factors:

In addition to competition from cars and airlines mentioned in the other answers, diesel locomotives and electric locomotives replaced steam locomotives in the early 20th century.

Basically, a steam locomotive's performance is roughly related to its size. A larger engine meant carting more coal (and water) around to operate it, and more weight that would put strain on the rails beneath it. This put a physical limit on how fast you could go on existing rail infrastructure. The switch to more efficient engine types basically upped the physical performance limit.

Another factor that may have played was public reluctance to actually go fast. When the first trains were introduced, some worried about colorful things like getting sea sick or women's uteruses flying out of their bodies because of the acceleration and high speeds.

The reason appears to be that railroads were the breakthrough transport technology of the 1850s (perhaps alongside "ironclad ships in the 1860s). When a single technology is so much the "leading" sector, there may be limits to how far ahead it can go until similar, "peer" technologies catch up.

This "catchup" took place (mostly) in the 1920s for automobiles and airplanes. With aviation, there was a competing, and faster technology that induced railroads to speed up. With airplanes and cars, there were also new designs in engines, metallurgy, etc. that allowed for this speeding up in the 1930s.

The answers are multiple.

One another point, the political will. For example in France and Germany, the late XIX was the time of the max extension of the network (40 000 kms for France only in 1914). In 1870, France lost the war against Prussians, one of the reasons is the better german rails. After this war, France expanded its network. This need for a better network also drove a big evolution in steam machines : more power axle, higher steam presure, double-work steam (mainly in France and UK, compound system)...

Between 2 wars, it was the time of personal cars. In 1937, almost half the french lines closed (the smallest ones). Due tu budget shrink, the progress were slower. After WWII, some french black hats understood Coal or Diesel weren't the best for french railways (small country, lots of rivers and lakes, no coal nor petrol) and pushed electricity to its best. After beating 2 world records in 1954 and 1955, they understood that 1500V cc wasn't the best either : high current implying big copper, power station every 10 kms. So they pushed research for industrial 25kV 50Hz current, and for dedicated HSR. they finally achieved the TGV with the unbeaten 2007 record. Next evolution will be maglev, but it's a huge gap. I think the actual railway speed record will not be beaten, just because it's useless.

Not the answer you're looking for? Browse other questions tagged records railroads or ask your own question.

5
Why were terminal train stations built in Germany?
3
What is the average travel speed for railways between European capitals in the late 19th century?