How would Zenobia's associates and servants address her?

After Zenobia's army annexed some of the neighbors' lands, and especially after her conquest of Egypt, how would they address her?

Would they use some sort of honorific? If so, what would it be?

The truth is that we just do not know with certainty how Zenobia's associates and servants would have addressed her. There are no surviving records to tell us. We know of many titles used to describe Zenobia by her contemporaries, and a number of these are included in the Wikipedia article.

The historian Victor Duruy, writing in the late 19th century, believed that Zenobia used the Greek version of her name in deference to her Greek subjects. She certainly adopted Greek versions of titles in some of her inscriptions.

An inscription on one of Zenobia's statues recorded her name as "Septimia Bat-Zabbai, daughter of Antiochus". "Zenobia" is the feminine form of Zabbai when written in Greek.

A slightly later inscription (dated c271 AD) includes the title "Sebaste", the Greek equivalent of "Empress" (the Latin would be "Augusta"). Another, with a dedication stating that the statue was raised by two senior army commanders, describes her as the "most illustrious and pious queen".

Coins dated to the following year (272AD) carry her prtrait and the the title "AVG" for "Augusta". 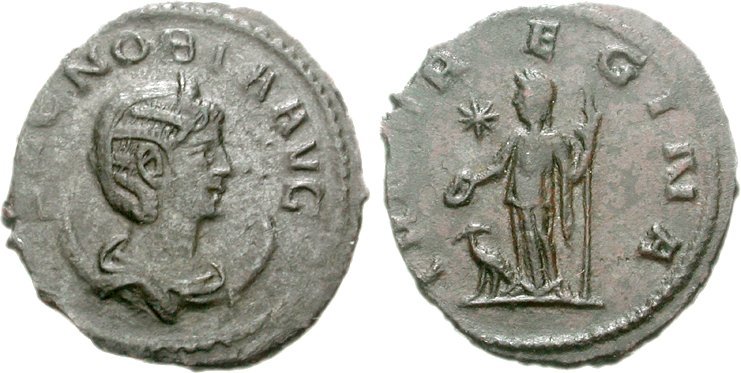 In August 272AD, Zenobia was captured and eventually sent into exile in Rome.

We are told (mainly by Roman writers, writing after her capture and exile in Rome) that Zenobia styled herself "Queen of the East".

Given that Greek was the lingua-franca of the Eastern Empire, and that (as we saw above) Zenobia had demonstrated a preference for using the Greek versions of her name and titles in inscriptions, it seems most likely that her associates and servants would have addressed her using the Greek "Sebaste" for Empress.

However, given that she seems to have been trying to demonstrate degree of equality with the Emperor in Rome during the rebellion, it is also quite possible that she would have required her servants and associates to address her using the Latin title "Augusta". As we've seen, she certainly used that title on her coinage.

Zenobia was known by her contemporaries in many ways, but perhaps the most famous of them was "Queen of the East".

Her empire, Palmyra, was near the eastern edge of what was then the known world, including Egypt. More to the point, she was seen as a viable competitor to Rome.

Not the answer you're looking for? Browse other questions tagged ancient-history ancient-rome or ask your own question.

29
What form of home address did Romans use?
7
What is the oldest road in the world that has been in continuous use?
9
Was there public resistance to Queen Hatshepsut's reign in ancient Egypt?
21
Why didn't the Persians make and use ballistas and other kinds of artillery?
10
How did people cut their nails in the past?
10
Would every Roman army have dedicated engineers?
0
Ancient Isis Origin
9
How were artisans trained in Ancient Egypt?
18
What would the Arch of Titus have looked like painted?