If the UK received the highest amount of Marshall Aid, why was it broke?

After WW2, Marshall Aid was distributed across Europe to facilitate the rebuilding of countries devastated by the war. West Germany received a large amount of this, and soon had a thriving economy.

However, the UK (one of the victors of the war) apparently received the single highest volume of aid, but was quite obviously on its knees financially (some bomb damage in London apparently not being repaired for decades). Was post-war bankruptcy purely down to the outstanding debt incurred through Anglo-American war time loans?

Finally, if these outstanding debts owed to the US and Canada really were what crippled the UK financially, why not just write off the debt and not bother with Marshall Aid at all to the UK? 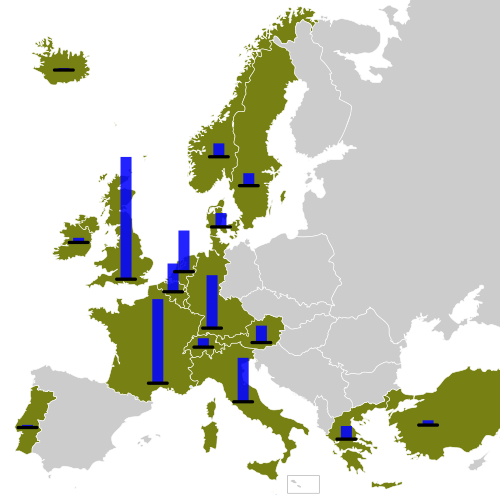 I remember being told as a boy in the 1970's that the reason our economy and industry was in such a poor state, particularly when compared with the West German "economic miracle", was that the RAF and USAF had bombed most of the German factories flat, and they had then re-built with the latest technologies paid for with Marshall Aid dollars. In the meantime, Britain, as the victor, had to struggle on with bomb-damaged factories full of worn-out and outdated kit.

It was all nonsense of course, but it became part of the national myth. The truth is that the British government made a deliberate decision to spend the money on maintaining her position as a world power, rather than on investment and reconstruction at home.

On 8 May 1945, Britain celebrated VE day, marking the formal conclusion of the war in Europe. Three months later, the surrender of Japan marked the end of World War 2, and VJ Day was celebrated in the UK, the USA and in Australia.

Between those two celebrations, the UK had held a General Election on 5 July, and elected Clement Attlee's Labour Party. That government is remembered today for the founding of the Welfare State and National Health Service. In fact, the foundation for these policies was laid by the wartime coalition government, and the differences between the campaign promises of the two main parties (Labour, led by Clement Attlee, and the Conservatives, led by Winston Churchill) look surprisingly small from a modern perspective.

The problem was that Britain was almost bankrupt. The Second World War had followed hard on the heels of the Great Depression. Britain's financial situation had not been great when the Second World War broke out in 1939. Although she had won the war, she had relied on American subsidies under the Lend-Lease programme to do so. That programme was ended by the US Congress just one week after VJ Day.

To bridge the gap, the new government was able to arrange a $4 billion loan from the USA. Despite that loan, the British economy remained in a parlous state, and the situation was not helped by the global post-war recession that preceded the post-war economic expansion of the 1950's. Rationing had been introduced at the beginning of the war. Food rationing would remain in place in the UK until 1954. Derelict bomb sites in London were still being redeveloped into the 21st century!

Britain had won the war. Together with the United States, the Soviet Union, and China, the UK was one of the "Four Powers". The British government and people still saw themselves as a major world power (many still do!). That world role involved maintaining large and expensive establishments around the globe. The economist John Maynard Keynes was appointed chief economic adviser to the new Labour government. He calculated the annual cost of those establishments at some £725 million, and observed:

"These are burdens which there is no reasonable expectation of our being able to carry."

However, the alternative was:

"... a sudden and humiliating withdrawal from our onerous responsibilities with great loss of prestige and the acceptance for the time being of the position of second-class Power, rather like the present position of France."

Furthermore, in may cases, British withdrawal would leave a vacuum which could be exploited by the Soviet Union.

This meant that a withdrawal was not only politically unthinkable for any government, it was also militarily unthinkable in the light of the developing Cold War. An excellent recent examination of this transitional post-war period is Britain and the Cold War: 1945 as Geopolitical Transition by Peter J. Taylor.

In 1948, the United States passed the Foreign Assistance Act of 1948 which created the European Recovery Program (better known as the Marshall Plan, named after the American Secretary of State, George Marshall).

France and Germany used the aid provided under the Marshall Plan to fund strategies for reconstructing their industry and infrastructure. As you pointed out, Britain received more aid than any other country in Europe. But rather than using this money to rebuild, the government (presumably with the agreement of the US) used it to fund Britain's role as a world power, while gradually dismantling her empire and creating the British Commonwealth. Put simply, the $4 billion post-war loan, and the subsequent Marshall Aid allowed Britain to maintain her position in the world.

In this context, where we are thinking about rebuilding economies and infrastructure following the war, it is worth remembering that in 1951 (the final year of Marshall Aid) Britain's estimated defence expenditure amounted to something like 7.7 per cent of her GDP. This was a deliberate political decision. Germany was still occupied by the allies, and so paid nothing for defence. That was money that could be invested in their economy.

During the 1950s, the post-war economic expansion enabled Britain to maintain that world role, but the opportunity to invest in the country's industry and infrastructure using Marshall Aid had passed.

Interestingly, people often point to the fact that the 1945 Labour government was a "socialist" government as a reason that the Marshall Aid was "wasted".

That government certainly implemented large-scale social reforms. However, the foundations of those reforms had been laid by the wartime coalition government. As mentioned above, the reforms promised by both the main parties during the 1945 election actually look surprisingly similar (although the reforms actually enacted by the Labour government certainly went further than those that had been promised by the Conservatives).

The challenges imposed by Britain's perceived global position would have been the same, no matter who was in power. The same is true of the global political situation and Britain's economic position.

Not the answer you're looking for? Browse other questions tagged world-war-two economy united-kingdom post-war or ask your own question.

0
What's the origin of the movement to withdraw the United Kingdom from the European Union?

5
What were some of the complications of Marshall Plan?
9
How big was the IMF loan Britain received in the 1970's?
11
Why did Britain decide to issue perpetual bonds during Napoleonic era?
5
What was the rationale behind restrictions on camera ownership in post-war Germany?
1
At the end of the Seven Years War, what was the total amount of gold and silver in Britain?
6
Did the Marshall plan only give back a part of what was taken?
2
Was there religious content on the post-war BBC World Service?
14
Why was the British army so short of rifles after Dunkirk?
6
When was the last time the US had the highest GDP per capita?