What was the true status of Hessian mercenaries?

"Hessians" were German soldiers serving the Prince of Hesse, (or other German states) that had been recruited for "domestic" service, and then sold by their Prince to the British for service abroad. The ones from Hesse made up the single largest contingent of the these German mercenaries, hence the name Hessian but about half of the Germans came from other states.

These "sales" took place in whole units; that is the soldiers were sold "by the regiment" and served in the same units under the same (immediate) officers while in British service as at home. The British paid the prince,not the individual soldiers for this service. It's not like they were signed up individually by say, British agents, to be commanded by British officers.

They were not true "mercenaries" in the sense of putting themselves up for hire. The only one that was "mercenary" in this transaction was their prince. Their original intention/understanding had been to defend their homeland.

D. H. Fischer's 2004 Washington's Crossing has a chapter on the Hessians in the American Revolutionary War. On p.52 is a map showing areas of Germany from which German troops in the war came from. More than half (18,970 out of about 30,000) are shown as coming from Hesse-Cassel.

There were a few soldiers pressed into service. Mainly because this was a form of deterrence for preventing desertions: once signed up, willingly, a man had sold his skin and his superiors went not only after him but after his family to compensate losses from desertions. Or the village if no suitable male would be on hand from that family.

But as the song makes clear, most signed up, explicitly to be 'sold'. Or better to go to America, defeat the rebel scum and plunder what they could. Not in the least because the conditions in Hesse was indeed quite bleak. A career in the armed forces as usual seen as an opportunity.

Those that were pressed – or seen as probably pressed, dominated the narrative, like Johann Gottfried Seume: "Mein Leben", Reclam: Stuttgart, 1986:

At the end of June 1781 he set off for France, but already on the third day

the Landgrave of Kassel, the great human mover at the time, took over the procurement of his future night quarters through his advertisers despite all protest.

But even this is contested for its truthfulness, as the nonchalance of this rather cynical witticism might indicate that he enjoyed the thought of going to America.

How many of the Hessians were volitional is exemplified by the low rate of desertion in Germany. Only 13 went missing. And even more so by looking at the plans the American illoyalists had with them:
Pressed mercenaries should be easy to sway into desertion? 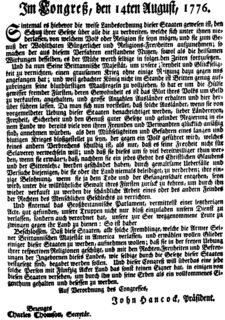 Handbill probably written by Thomas Jefferson, translated and printed under the supervision of Benjamin Franklin, and distributed among the Hessian troops on Staten Island, August, 1776. From the only known copy, in the German State Archives at Marburg.
–– Lyman H. Butterfield: "Psychological Warfare in 1776: The Jefferson-Franklin Plan to Cause Hessian Desertions", Proceedings of the American Philosophical Society, Vol. 94, No. 3, Studies of Historical Documents in the Library of the American Philosophical Society (Jun. 20, 1950), pp. 233-241. (jstor)

How many took up that generous offer is "slightly" overestimated by deductive logic with not much base by Butterfield. The real numbers seem to be less than half of his estimate.

Or reversing the perspective:

They were unquestionably better prepared mentally and militarily to confront the rebels than any other auxiliary corps. Unlike the Ansbachers, only half of whom were natives, or the Brunswickers, who counted only 600 natives among their 4,000-man contingent, the original 12,000 Hessian troops dispatched to America were a largely homogeneous force that prided themselves in being Landeskinder.

They also compare favorably to the American "citizen army" that opposed them. In many respects the two forces were not much different from each other. Both comprised a combination of social outcasts and the very poor, with almost no tradesmen or landholders. Both also included many "volunteers" who had enlisted because of peer pressure and coercion, as well as former militiamen who had never expected to go to war but who were now obligated to do so. If anything the Hessians were the more representative of the poorer and more militaristic society from which they came. At least in the beginning they also fought much better and with more enthusiasm and were more faithfully and adequately attended to by their own government.

Nor were the Hessians easily seduced by the rebels' revolutionary message. Far to the contrary they were clearly more sympathetic to the British. Regardless of whether they were written by common soldiers, noblemen, or bourgeois officers, the large body of diaries and corre- spondence that survived the war make it clear that the Hessians never sympathized with the constitutional arguments presented by the Amer- icans. Coming as they did from a country where even the average no- bleman was poorer than most colonists, they were also appalled by the Americans' unwillingness to pay taxes for British protection against the common French enemy. Most of all they were deeply critical of the hypocrisy of men who could proclaim "freedom" from oppression, yet persecute Tory loyalists and enslave and brutally mistreat a half million African blacks.

The Hessian treatment of blacks demonstrated, in fact, that the two societies were worlds apart in their definition of equality. So appalled were they at the denial of human dignity to slaves that individual Hessian officers tried to purchase or otherwise free blacks from their masters. 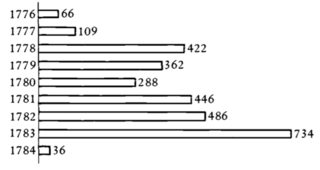 The 2,949 Hessian missing and confirmed deserters listed by the military authorities did not run away at the first opportunity, or on the eve of the first battles. Nor did they desert following exposure to American propaganda and bribes. Even Hessian prisoners of war gen- erally resisted American inducements, choosing to remain interned rather than become settlers or enlist in the Continental Army. Rather, the great bulk of them fought on for several campaigns, choosing to stay in America only as the war was coming to a close and after they had already been demoralized by capture, idleness in garrison duty, or impending defeat.134 It was only at this point that the soldiers began to turn their attention to the future and to the impending choice between returning home and staying in the New World.

Not the answer you're looking for? Browse other questions tagged war american-revolution or ask your own question.

19
Private firms (aka mercenaries) as a police force
14
What are the French gains after the American Revolutionary War
16
Is there evidence Muslim soldiers fought in the Continental Army?
9
Why hire Hessian troops?
5
How can you see what rank a British redcoat is?
9
Before his arrival at St Helena, was Napoleon legally a prisoner of war?
3
What started the American Revolution?
2
What prevented the Indian Army to wrest Kashmir from Pakistan despite the UN Security Council's resolutions of 1948-49?
4
What was the extent of France's material support during the American Revolution?