What was an upper and a lower region?

What made a region an upper, or superior region, or a lower, or inferior region?

I've tried to research this. There doesn't seem to be a correlation with altitude, relative orientation, or size. Maybe it is whether they are up- or down-river, but I'm uncertain about that.

Typically it refers to a river, and "lower" is down-river (closer to the coast), while "upper" is up-river (further inland). This is because the land at the mouth of a river is lower (in altitude) than the land near its source. Basic physics here.

This principle sometimes get applied in unexpected places. For example High German (or "upper German") refers to the dialects spoken in the interior of the European continent, while Low German is the dialects spoken nearer the coast. It is not (as many assume) any commentary on the perceived quality of the dialects themselves*. 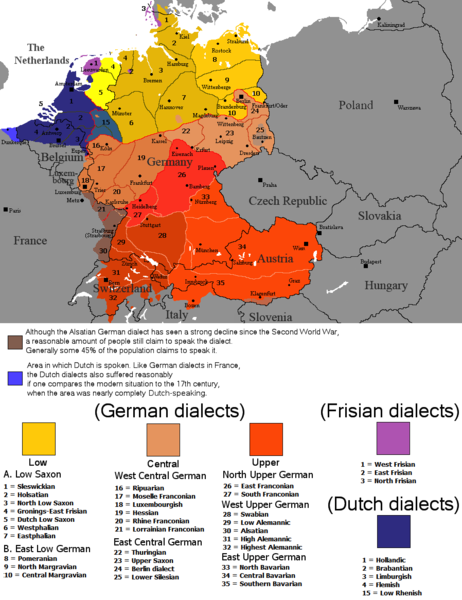 * - unlike the terms high church and low church, and many other English high/low couplets relating to social things, which are totally a commentary on their perceived quality.

"Upper" and "lower" refer to highlands and lowlands of a country, usually defined by one (or more) rivers.

Moesia Superior was on the Balkan highlands, in modern Serbia and Macedonia. Moesia Inferior was in the lowlands of modern Bulgaria and Romania, on the Black Sea coast. The two are also connected by the Danube.

It's normally to do with the relative positions up- or down-river.

Not the answer you're looking for? Browse other questions tagged roman-empire geography cartography or ask your own question.

17
How accurate and detailed were geographical maps created and updated by the Romans?
10
Why is Baja California often shown as an island on maps between 1500 and 1700?
5
What Was the Political Condition of the Region that Encompasses the Modern Russian State in the time of the Roman empire?
9
What was the most accurate map of the world before artificial satellites?
13
What was the northernmost region/city in the Roman Empire that spoke Greek as the native language?
12
What was the first map of Antarctica having a shape based on real evidence?
3
What types of jobs did upper class Romans do?
0
What was the name for the region before it was "the Balkans"?
8
How were maps drawn and printed in the late 19th-early 20th centuries?
7
What sort of maps did the ancient Greeks make and distribute?