What is the Greek inscription on the Nicaea gate?

I was visiting the historic city of Nicaea (Iznik) in Turkey this August and studied it's history. I noticed the entrance gate at the southern wall of the city which was built by the Romans.
The same entrance gate was used by the Ottoman sultan Orhan 1 (Orhan Gazi) when he entered the city after a long siege in 1331ad. The lower part of the gate has paintings of the sultan and his army celebrating the historic victory and event. The photos are attached. 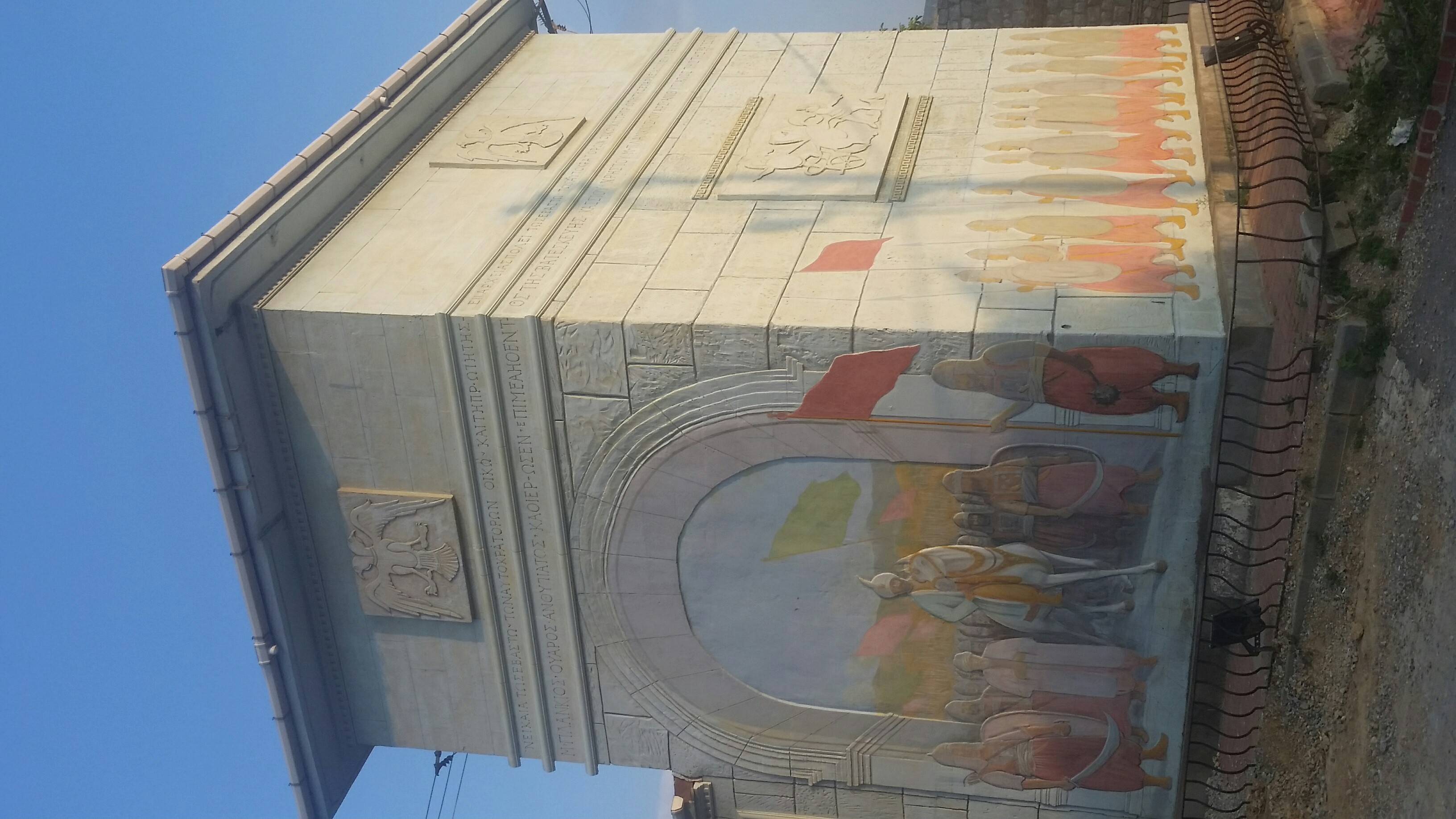 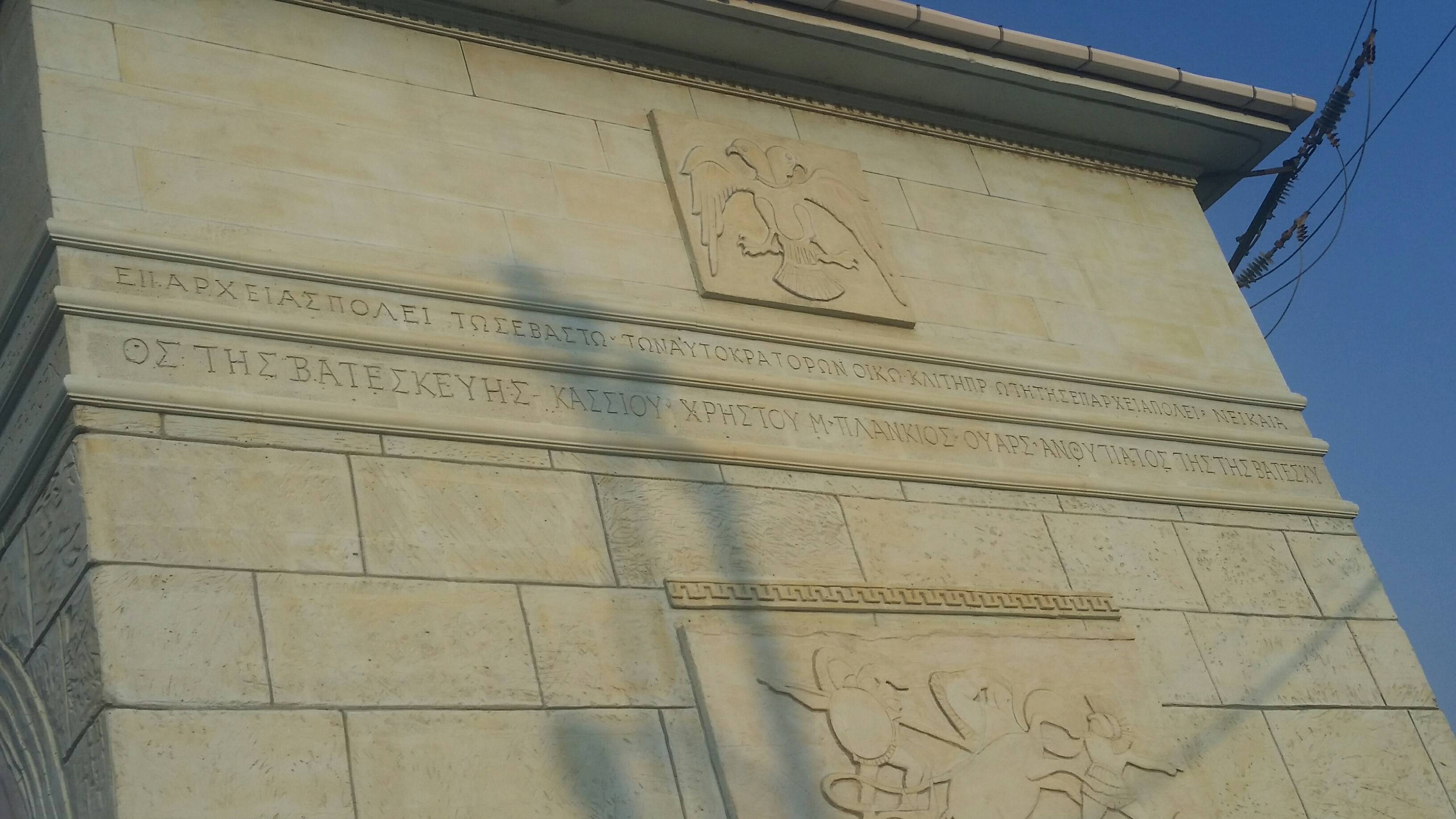 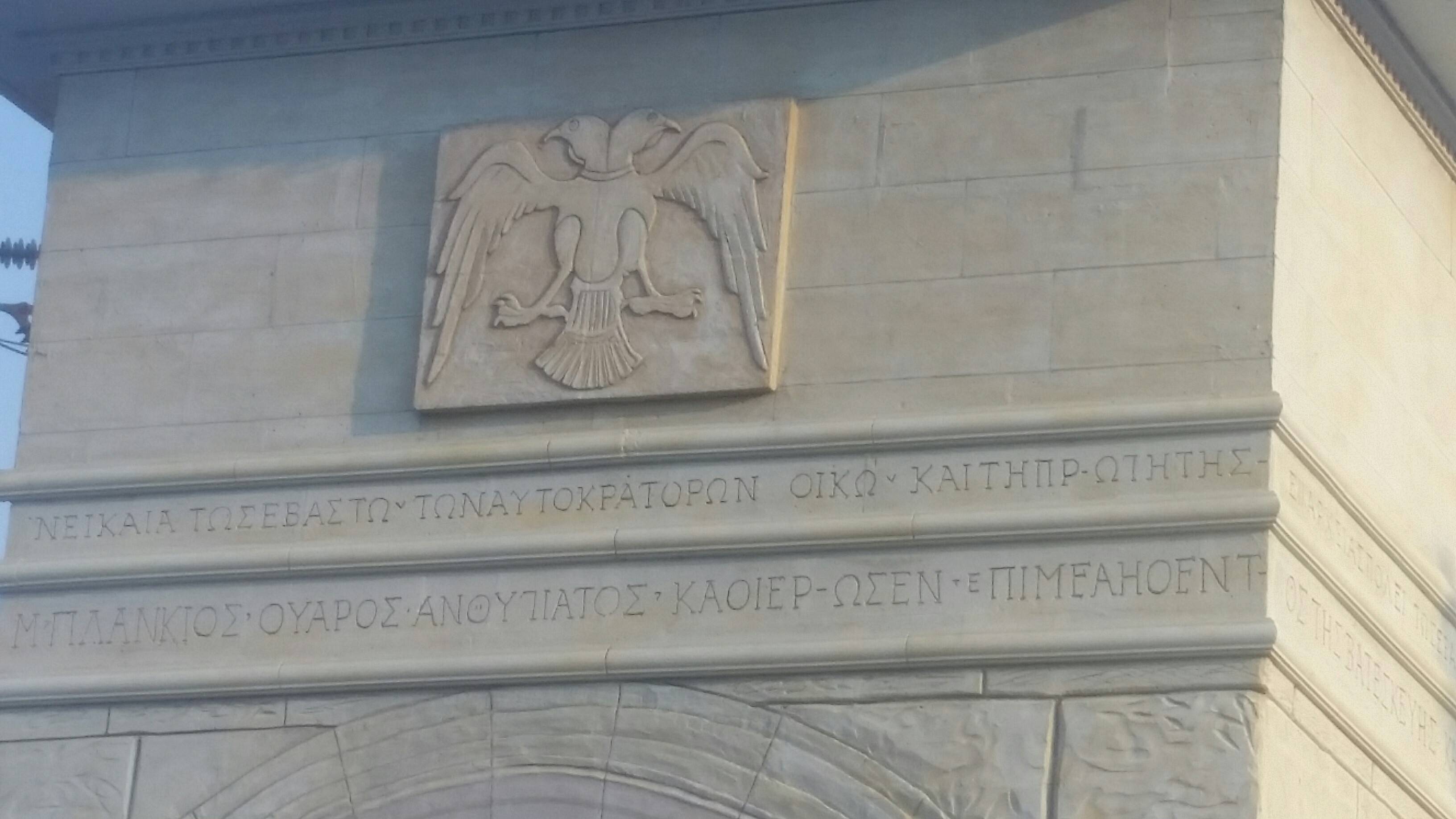 There is a Greek inscription in large type at the top. Could someone who knows Greek translate this for me?

This is only a partial answer, mainly to guide further answers and to lift the comment from @Notaras:

This building according to this is a electrical substation. The text is a bit unclear to me. Nicaea is misspelt as "Νεικαια" when it should be "Νικαια". The rest of the text appears to be taken from coin inscriptions. A standard long dedication reads roughly as "dedicated to the empire's ancient city of Nicaea by Magistrate and Proconsul Markos Plankios". This may not be fully correct so leaving as comment…

This is an electrical substation, or transformer building, disguised as something old: 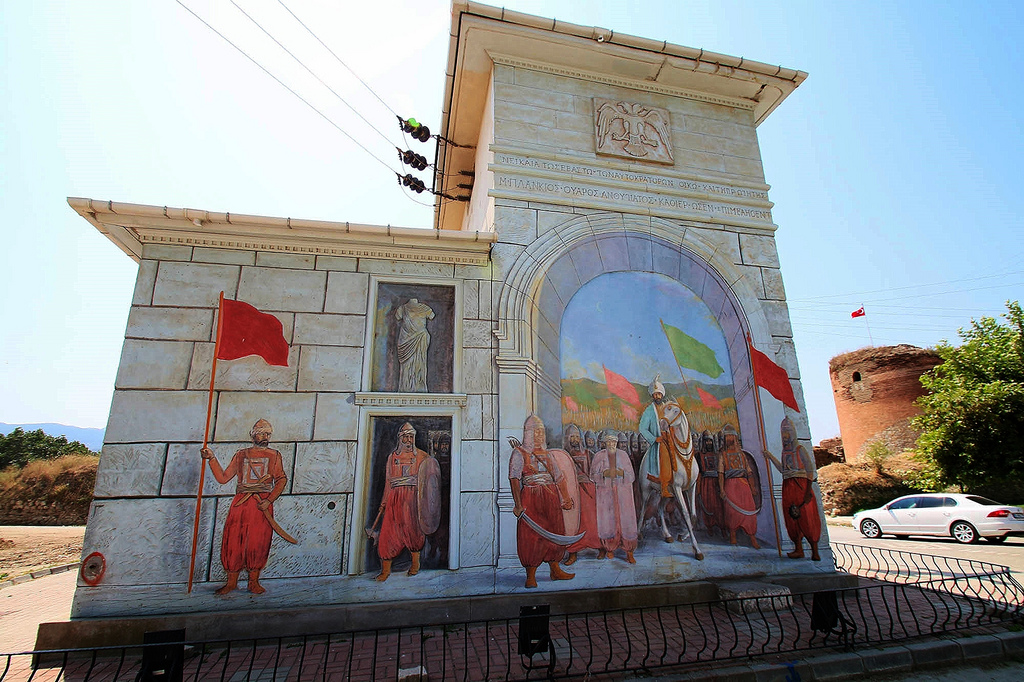 It's a little hard to understand this is a transformer building. In the hands of a master painter who kept kept history… (machine translation from Turkish)

Although in most pictures of it on the net, those indicators of modern origin are often kept out of perspective… 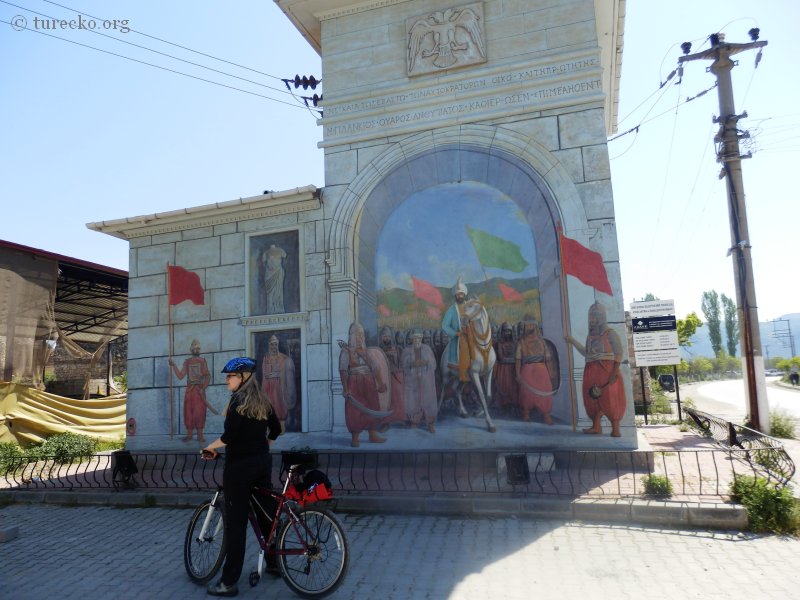 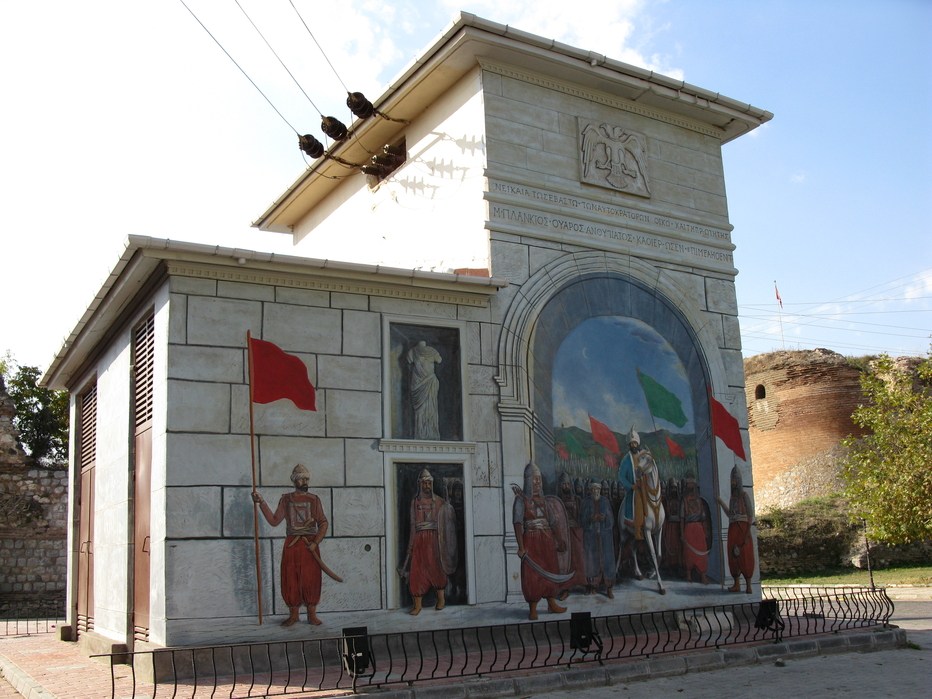 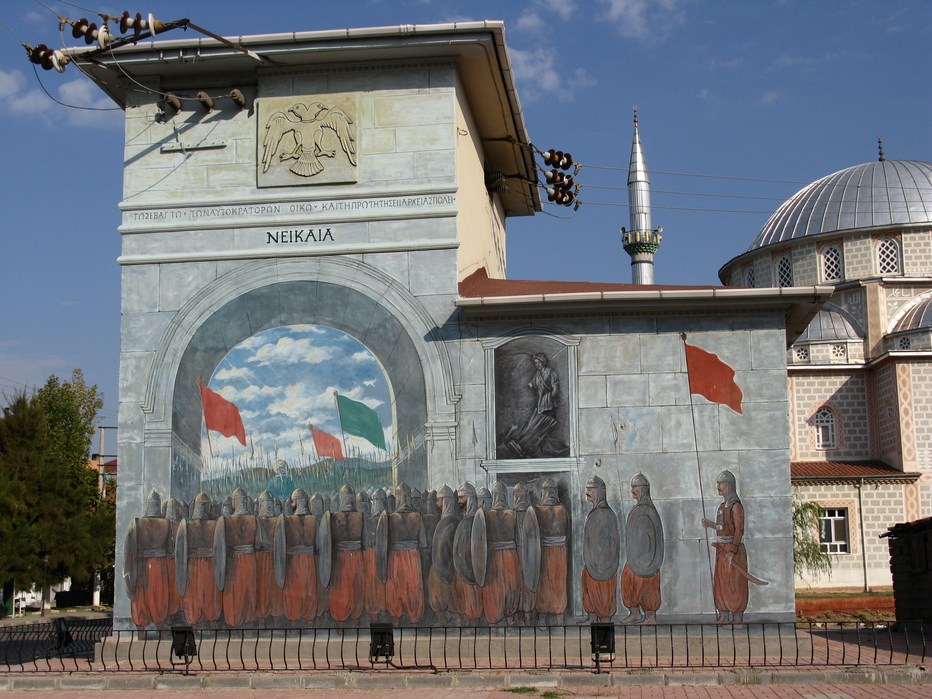 And it is said to depict Orhan entering the city through the nearby southern gate. The southern gate he used looks like this: 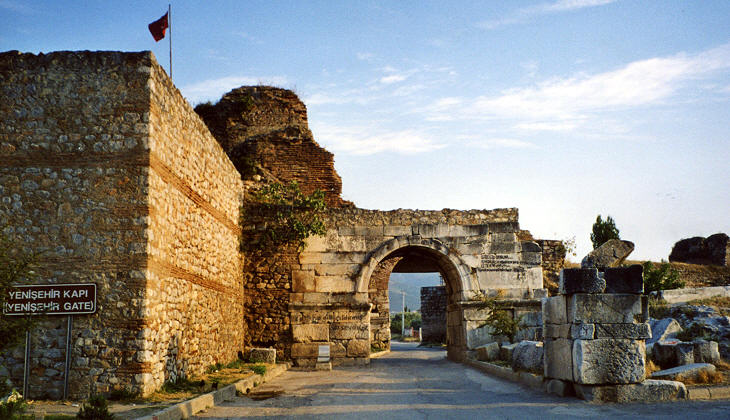 Via The Walls of Nicea – the gates

I think it's supposed to say "To the august City of Nicaea, hometown of emperors, provincial capital, the proconsul Marcus Plancius Varus (gave/dedicated this); Cassius Chrestus (designed/supervised the work). But the painter obviously doesn't know Greek and has jumbled the inscription up, presumably copying it in bits from the remains of the original.

Marcus Plancius Varus was a real person and was the Roman proconsular governor of Bithynia and Pontus, ruling from Nicaea, at the end of the 1st century AD. I'm not aware of any Roman emperors who came from Nicaea, but the kings of Bithynia did live there in the 1st century BC, including Nicomedes who supposedly had an affair with Julius Caesar - so perhaps Plancius intended a sly reference to that!

18
What was "Greek fire"?
12
Does Little Hagia sophia still contain Greek mosaics under the plaster?
16
Why didn't "Europe" support the Byzantine Empire against the Turks?
2
What was the Janissaries' Strength?
1
What happened to Children of Prince Halil of Ottoman Empire?
7
Was Mimar Sinan of Greek Christian origin?
1
Why did the Ottomans rebuild Byzantine gates to a smaller format?
20
What is the large blue object on the right in this picture showing Greek fire?
4
When did Byzantines become more Greek than Roman?