How do Dambadiva kings fit in Indian history?

By leaving behind many number of books in original Mahavanshaya which were written in the past history by covering all 29th Lord Buddha's eras and the Great emperors in the great Island including King Maha Sammatha, King Ravana, King Shaka generation (King Shaka 1 to King Shaka 15) and many more Great emperors' eras, Mahavanshaya was rewritten by native foreigner, Monk Mahanama with influence of foreigner, Monk Buddhagosha in 05th Century.

As per the known history rewritten Mahavanshaya was not even completed by those two foreigners based on protest which was arisen among the locals by leading Monk Upathissa, and also those two monks had left the island secretly by leaving incomplete rewritten Mahavanshaya in the Island. Native foreigner, Monk Mahanama has taken the start in rewritten Mahavanshaya by giving all 29 Lord Buddhas’ era with simple introduction by giving a clue of foreign arrivals, and further stating there are many books of Mahavanshaya which ware already written in the past history by locals about the history of the island, however due to there are many errors in the written history, he rewrites the history of the Island by making short its long stories and dragging short stories to long stories by adding taste of art in to the history. Here there is a BIG question? How foreigner cut long stories to short stories in foreign country history? How he says there were many errors in the written history of the Island which was led to more than 20 thousand year's history by covering all 29 Lord Buddha's eras. Native Foreigner,author of Mahavanshaya, has made many effort to convince readers to believe Dambadiva is a foreign place in another country without mentioning the country. However in ancient written even in foreign countries, there are many evidence to proof it is the island of Jambudeepa, and also it was Heladeepa, Three Sinhale, Sinhale, Ceylon and SriLanka. Below are the few great examples to prove Dambadiva is not a foreign place in another country, it is the Island of Ceylon.

First three evidence ware taken from a great history book which was recently written in native language with heard research under title "Land of Lord Buddha" It was written by Mr H.S.Herath 1st Evidence - "General Account of the Encircling Ocean" this is also known as "Ying-hwin-che-ke" This book was written by yin Huwan -che-ke, Lieutenant of Fue Kien reigon in 04th Century In a chapter it says "Seih-lan is situated in Southern India, and is a large island in the sea, on the south east ,coast,its circumference been about 1000 le (300 miles) having in the centre lofty mountains ;on the coast the land in low and marshy . The country is characterised by much rain and constant thunder. The hills and valleys are beautifully ornamented with flowers and trees of great variety and beauty, the cries of animals rejoicing together fill the air with gladness,and the landscape abounds with splendour. In the forests are many elephants and the native use them instead of draught oxen or horses. The people are all of the Buddhist religion ;it is said that Buddha was born here....

In a paragraph, author further explained quoting below information to indicate boundaries in the monarch of Ruhuna saying

“Thissa Dagaba in division of Magam, and Saman Mountain with 212 fortune symbols which is worshiped by here locals in Jambudeepa with an invitation of God Saman are also included to the Monarch of Ruhuna”

Mountain Saman is also known as Sripada mountain which is situated in SriLanka, Buddhist worship this mountain based on Lord Buddha's footprint on it

In our Lord Buddha’s calendar years, year, seven hundred and three Year, Baminisaya Drought was in Dambadiva Year, viewing one, being in crown Shine Lord Buddha in future Shaka year

Monk Mahanama not only misled Dambadiva History, Island Ceylon, but also Indian History by dragging foreign country history, and mixing it in to their history, hence Dambadiva kings are in only in Buddhist books in Indian history.

The word Dambadiva does not fit into Indian history because the reference is wrong. It does not refer to anything in India.

The word "Dambadiva" is the Sinhala translation of the Pali term Jambudipa. The name is wrongly used to refer to India/Nepal where Buddha lived. Check the Google search here -> https://www.google.com/search?q=dambadiva

Dambadiva is in fact the "Deva Area" shown here. 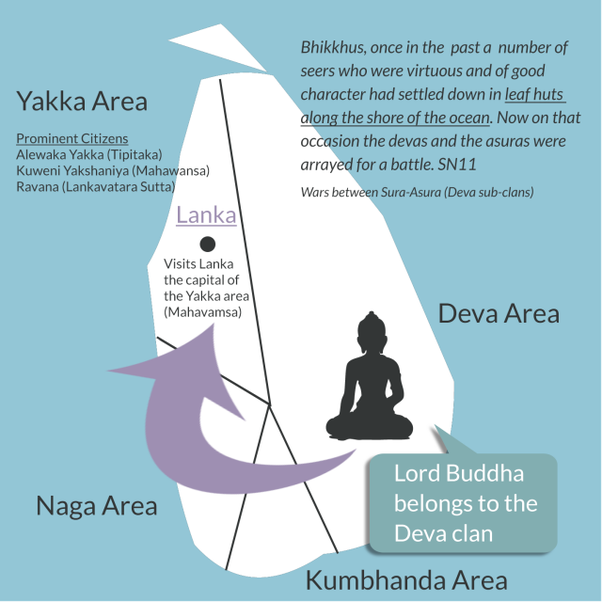 How the history got distorted is mentioned here -> https://jambudipa.quora.com

Not the answer you're looking for? Browse other questions tagged buddhism indian or ask your own question.

0
How did Pocahontas die?
9
How much do we know about Emperor Ashoka?
2
How did the Graeco-Bactrian empire come to accept Buddhism?
2
What is the origin of South Indian languages?