Right before D-Day, how were naval mines cleared secretly?

Minesweepers began clearing channels for the invasion fleet shortly after midnight and finished just after dawn without encountering the enemy.

It also shows this map: 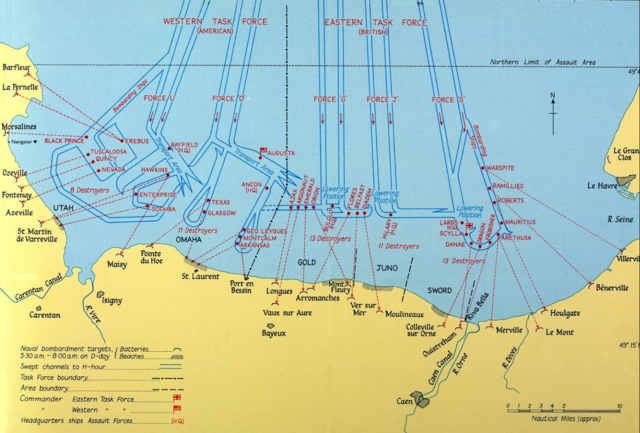 This seems like a lot of mines to clear. I'm wondering how the allies were able to do this all through the night without the Germans noticing.

Seems like the wiki article you linked covers it fairly well:

Bombing of Normandy began around midnight with more than 2,200 British, Canadian, and American bombers attacking targets along the coast and further inland

Minesweepers began clearing channels for the invasion fleet shortly after midnight and finished just after dawn without encountering the enemy.

(all emphasis mine) It wasn't exactly a stealth mission. The bombardment began and provided cover fire to enable the minesweepers to approach.

An interesting discussion of the process from one of the individuals involved can be found here:

Our ship, which was on the port side dropping buoys, had the job of giving a sharp blast on the siren each time a buoy was dropped, so that the buoy layer on the right hand side would drop its buoy at the same moment. The awful noise of the siren made us wonder if the Germans wouldn’t hear us coming, but nothing happened. Our own light coastal forces were out in strength cruising around, waiting to give us cover if we were attacked.

So, not a quiet process, or secret by any means.

The minesweeping process of the time involved cutting loose the mines and then detonating them on the surface with gunfire.But again the bombing taking place might cover any detonations.

So between detonating mines, siren blasts, and overhead bombers attacking the coast, I don't think they were expecting secrecy at this point.

Not the answer you're looking for? Browse other questions tagged world-war-two military dday or ask your own question.

25
How many troops died on D-day?
15
Jurisdiction in German occupied territories after WW II
10
During the Normandy landings, were any German naval assets brought to bear against the Allies?
0
Why did Britain place naval mines in their own Channel in WW2?
23
Why did US Navy WW2 torpedoes detonate at the end of their run?
6
Before and during WW2, how were war games played?
11
How were the day-to-day activities of the French Resistance financed?
18
Why did the Japanese attack the Aleutians at the same time as Midway?