What is the definition, usage, and etymology of “Sandy ware”?

Wikipedia has the category "Sandy ware in the Portable Antiquities Scheme"

Is it a kind of pottery? Or a type of coating for pottery? That's what I would understand from this page. What would it have been used for, and why?

Here's an example I found online that's identified as Anglo-Saxon: 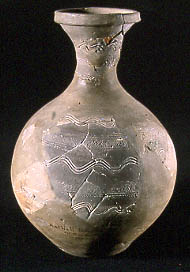 Sandy Ware is a type of medieval (and earlier) pottery with enough quartz sand mixed in with the clay for it to be visible in the fabric of the pot. The sand acted as a temper which helped bind the clay together, and keep the finished pot from cracking while being dried and subsequently fired. Examples are found across the UK, and have different chronologies in different part of the country.

If you are particularly interested in medieval pottery, and want to learn more, the Medieval Pottery Research Group website has some useful links and a bibliography that should get you started.

The Portable Antiquities Scheme is a project to encourage the voluntary recording of archaeological objects found by members of the public in England and Wales. Because the focus is on small finds reported by the public, there is a bit of a bias towards metalwork (for example this Roman brooch*), but bits of flint (for example this gun flint), pottery, etc. that someone finds "interesting" are also reported and recorded. There are currently some 335 pieces of Sandy Ware on the database.

Archaeologists are fond of using the term "-ware" to differentiate between different pottery types. In London, we also get a type of pottery known as "Shelly-Sandy Ware" which - as you've probably already guessed - used both sand and ground-up shell as temper.

* Examples found by me while assisting at at past public open days at the Tower of London foreshore and reported to the PAS.

Sandy ware would be a reference to pottery or other ceramics such as glassware.

As the name suggests, that would be a reference to containers or other goods to which sand was added in the production process to keep the material together.

Not the answer you're looking for? Browse other questions tagged middle-ages cultural-history archaeology everyday-life iron-age or ask your own question.

14
In Europe, why were there few portraits showing a real likeness of the subject before the 15th century?
11
Did Edward the Confessor choose Harold Godwinson as his successor?
8
What evidence is there of Asians and Africans in medieval Britain other than Moors in the 7th century?
10
What is the earliest evidence for the use of hearing aids?
21
Did horse sacrifice persist in Christian Europe?
16
What was the early understanding of static electricity shocks?
16
How exactly were beer/bread made in Ancient Egypt?
26
How did William the Conqueror consolidate his military victory?
1
Why are the Corded Ware and Kurgan theories incompatible?
0
How did 15th century royals identify themselves in England/Spain?