Did Saint Paul preach at the Theater in Philippi?

We know that Saint Paul traveled to and spent much time in Philippi-(in the North of Greece). In fact, Saint Paul began his European mainland mission in Ancient Neapolis-(present-day Kavala) and then onto nearby Philippi. It is well recorded within The Acts of The Apostles of Paul's preaching to the Philippians, as well as conducting a baptismal ceremony and his imprisonment. However, did Paul ever preach his message within the Theater at Philippi? I ask this, because it would seem to me that Saint Paul would have used the Theater in Philippi as a center of missionary preaching, the way he used the Theater in Ephesus for his missionary preaching.

Although the historicity of Paul is generally accepted, almost everything which has been written about him is sourced from the bible. The Acts of the Apostles are the main source of biographical information on Paul but there is much there which conflicts with other biblical texts. Consequently, everything must be treated with extreme caution. That said, seven of Paul’s letters are generally considered to be genuine (i.e. written by him).

There is no evidence that Paul ever preached in the theatre at Philippi. Neither Acts nor Paul’s letters say or even suggest that he did. The Cambridge Companion to St. Paul says that:

...Paul was likely to have been at a disadvantage in the public domain, having neither the oratorical skills nor the necessary sponsor to give him an entree...

It is no accident that patrons, households and house churches are so prominent in the letters of Paul the missionary. As a place and social context for preaching the gospel, the private house offered certain advantages over preaching in synagogues and public places. 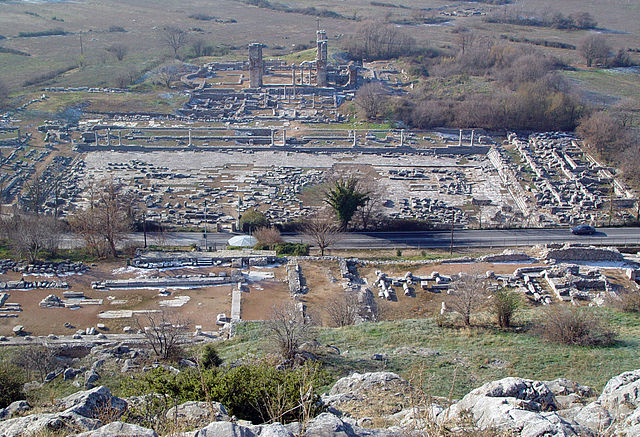 Philippi's forum and basilica B seen from the acropolis. Under the remains of this forum lies an older forum where Paul was apparently arrested. Attrib: By No machine-readable author provided. Marsyas assumed (based on copyright claims). [GFDL (http://www.gnu.org/copyleft/fdl.html) or CC-BY-SA-3.0 (http://creativecommons.org/licenses/by-sa/3.0/)], via Wikimedia Commons

Nor, in fact, is there any evidence that he preached in the theatre at Ephesus, despite what many sites say (see here and here, for example). Referring to Ephesus, the Turkish Archaeological News site article Great Theatre in Ephesus states

The theater is often mentioned in the context of St. Paul's visit to Ephesus. The common misconception is that he actually preached in the theatre. Actually, there is no historical evidence of St. Paul's presence in the theatre. Moreover, it was under reconstruction at that moment. The situation, as it is described in the Acts of the Apostles (19:23-41), developed after a local jeweler named Demetrius encouraged the crowd to chant "Great is the goddess Diana of Ephesus!". His motivation was the fear of a drop in sales of statues depicting the goddess. The crowd started moving towards the theatre, but St. Paul was encouraged by his friends not to enter the theatre. The riot provoked by Demetrius forced Paul to leave the city.

10
Why did Martin Luther hate the Jews?
24
What was the scale of eroticism in Byzantine theater?
7
How did ancient mystery religions impact Christianity?
11
Why was ancient Christianity more successful than the Roman pantheon and Judaism in gaining followers?
12
Why did people die for their religion in the 400s CE (or even now)?
13
Did the biblical apostle James visit Ireland?
8
Was Saint Patrick an abolitionist?
5
What religions did Constantine convert to?
20
How did Christianity replace Roman Paganism and other ancient religions?