What was the largest ancient theatre?

It is impossible to say with any certainty, but there are a number of theatres which, according to modern estimates, could hold around 20,000, give or take a few thousand. Among these are the ones at Ephesus, Syracuse, Apamea, Smyrna and Megalopolis.

While Pliny the Elder gives substantially larger figures for both the Theatre of Pompey and a temporary theatre from around 58 AD, he was prone to exaggeration. The Greek geographer Pausanias gives no numbers but says that the one at Megalopolis was the largest in Greece.

In terms of capacity, there is some dispute, much of it due to variations in how much seating space is 'allowed' per person. If Pliny is to be believed, the largest theatre would appear to be the Theatre of Pompey, completed during Pompey's consulship in 55 BC, with a capacity of 40,000. However, modern estimates put the capacity at only 10,000 but there are no details on how this number was arrived at.

Frank Sear, in 'Roman Theatres: An Architectural Study', disagrees with this estimate:

The fourth-century Regionary catalogues state that it had 15,580 feet of seating or around 11,600 seats. This figure seems very low for a theatre of this size and it may be explained by the condition of the 400-year-old building in the fourth century. It is quite possible that by then parts of the auditorium were unusable.

In a footnote, Sear adds (referring to the aforementioned Regionary catalogues):

According to the same catalogues, the Theatre of Marcellus had a greater seating capacity, although its diameter was 20 m less than that of the Theatre of Pompey.

Sear goes into much detail on seat measurements and theatre types, and provides several tables showing the capacity of different theatres. He also explains the problems in calculating capacity:

the Regionary catalogues, which gave the seating capacity of the theatres of Rome, specified the length of seating, rather than the actual number of seats. That was presumably because ancient theatres did not have individual seats as do modern theatres. They had continuous seating, which meant that capacity varied according to the amount of space assigned to an individual seat (locus). A standard seat width was normally between 0.36 and 0.50 metres. At Stobi prohedroi were allocated 0.80 metres, which suggests that normal seats were 0.40 metres. In the Theatre of Dionysus at Athens marks indicating individual seats were 0.41 metres apart, and only 0.36 metres apart at Corinth.

He further explains that theatres in Greece and Asia Minor had a much greater capacity than western theatres with a similar diameter. Sears provides tables with seating capacity calculations which give 19,717 for Ephesus (but another estimate he quotes is 21,500) and 18,537 for Miletus. He also quotes a figures of 20,350 for Smyrna (Izmir) and 19,700 for Megalopolis (Arkadia). 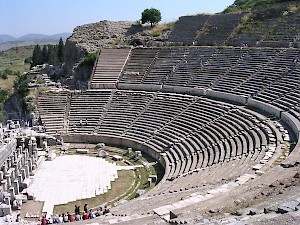 Another candidate is Roman Theatre at Apamea which Wikipedia describes as

The 20,000 estimate is based the work of Cynthia Finlayson who was involved in excavations in the area from 2008 to 2010.

Pliny gives what is clearly an exaggerated account of the temporary theatre built by Marcus Aemilius Scaurus, the aedile of 58 bc....The auditorium held 80,000 spectators, twice the capacity of the Theatre of Pompey....adorned with 3,000 bronze statues and 360 columns, the lowest storey of marble with columns 38 feet high, the middle one of glass (an extravagance unparalleled even in later times!), while the top storey was made of gilded planks.

How much did Pliny exaggerate? For the Theatre of Pompey, it would seem his number is between 3 and 4 times the actual. If this scale of exaggeration is also true for the temporary theatre, we arrive at a figure of between 20,000 and 26,600.

Finally, the geographer Pausanias (c. 110 to 180 AD) states in Descriptions of Greece (8.32.1) that the theatre at Megalopolis was

the largest theatre in all Greece 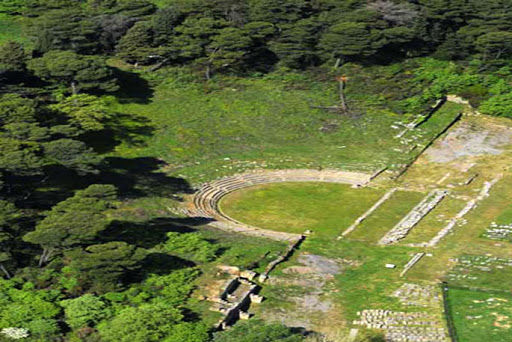 The people of Epidaurus have a theater [theātron] within the sacred space [hieron], and it is in my opinion very much worth seeing [théā]. I say this because, while the Roman theaters are far superior to those anywhere else in their splendor, and the Arcadian theater at Megalopolis is unequalled for size, what architect could seriously rival Polycleitus in symmetry [harmoniā] and beauty?