How young were children left alive in Auschwitz?

I was reading a criticism in Wikipedia of The Boy in the Striped Pajamas which has a 9-year-old boy in the camp, but people apparently knowledgeable assert this is not realistic -- those who could not work were immediately gassed.

At the same time, Primo Levi describes a very young kid in the camp who dies near the time of its liberation. I think medical experiments were performed on children but otherwise, would there have been children?

EDIT: The guy who objected to the movie made it clear that he thought there were no 9 year olds at all in the camp (I guess Mengele would have chosen children that young on the train platform?) but what of the kid Levi describes who was not only very young (apparently) but also severely disabled?

If inability to work is your main argument, you should remember children have been heavily involved in the work force until recent times.See Child Labor. Children are still used as labor in some parts of the world today:

In 2010, sub-saharan Africa had the highest incidence rates of child labour, with several African nations witnessing over 50 percent of children aged 5–14 working.

We have laws to protect children now, but these prisoners had no such protection. They worked until they died. Since some children are quite resilient, some survived longer than others.

Some survivors pictured on PBS.

Perhaps you have seen Elie Wiesel speak, or read his books. He was 15.

Wiesel and his father were selected to perform labor so long as they remained able-bodied, after which they were to be killed in the gas chambers.

Note: my answer was to the question as originally worded:Were there children in Auschwitz?, and to the contention that children would have been summarily killed because they were unable to work.

In the words of Rudolf Hoess, Commandant of Auschwitz, in his testimony at Nuremburg in 1946:

Those who were fit for work were sent into the camp. Others were sent immediately to the extermination plants. Children of tender years were invariably exterminated since by reason of their youth they were unable to work.

So it seems that there was no hard and fast rule in regard to children. If they looked old (and strong) enough to work, they would be set to work. Otherwise they would be murdered.

The uniforms given to the camp inmates were not tailored, and frequently ill-fitting as a result. If you look at the famous Soviet photograph, of children in Auschwitz, you can see how the uniforms hung off them: 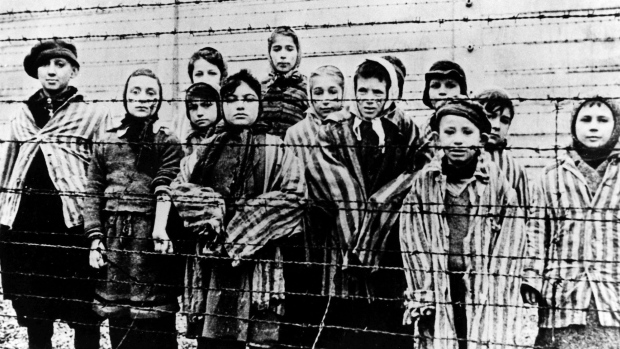 These children, who were all in Auschwitz at the time of its liberation, had not been given uniforms. Uniforms were given to them, for the purposes of this photograph, by their Russian liberators.

So why were little children in Auschwitz?

Many of those children were brought from Theresienstadt, and the Nazis set up a familienlager in Auschwitz for this purpose. Children were kept with their parents, (obviously) not given uniforms, and were treated better than those outside of the "family camp". Most specifically, they got to hold onto their luggage, and their heads weren't shaved. Some of those children survived the war, although the precise circumstances under which they did so is a matter of historical discussion.

For more information, see David Cesarani, Final Solution: The Fate of the Jews 1933-49, p685 - and his references there (specifically Nili Keren's article in Gutman's Anatomy of the Auschwitz Death Camp). One of the children in the family camp was Otto Dov Kulka, who later wrote Landscapes of the Metropolis of Death.

3000 babies were delivered at Auschwitz - This Midwife at Auschwitz Delivered 3,000 Babies in Unfathomable Conditions: http://www.history.com/news/auschwitz-midwife-stanislawa-leszczynska-saint

It was, though—thanks to a woman named Stanislawa Leszczyńska. During her two-year internment at Auschwitz, the Polish midwife delivered 3,000 babies at the camp in unthinkable conditions. Though her story is little known outside of Poland, it is testament to the resistance of a small group of women determined to help their fellow prisoners. ..... Leszczyńska, assisted by her daughter and other prisoners, later said she delivered 3,000 babies during her two years at Auschwitz. She continued to refuse to kill babies despite repeated orders to do so, even standing up to Dr. Josef Mengele, the camp’s infamous “Angel of Death,” who was known for his brutal experiments on twins and other inmates.

Not the answer you're looking for? Browse other questions tagged holocaust auschwitz or ask your own question.

13
How successful were Einsatzkommando Tunis and how much was Rommel complicit?
11
How were middle ranking Nazis known to the allies before the end of the war?
3
How might someone have gotten a note forwarded from a transport train headed to Auschwitz?
5
How would an SS officer travel from Auschwitz to Berlin?
41
How were concentration and extermination camp guards recruited?