When were public roads cleaned electromagnetically?

In the first half of the 20th century, tires were more often punctured, so metal waste on the roadway was a bigger problem. The book "Lorries, Trucks and Vans 1897-1927" features an electromagnetic road cleaning device. Since there is no manufacturer indicated it might be only an artist's idea of such a device, but the included text says that it existed.

Where and for how long was such a device actually used? 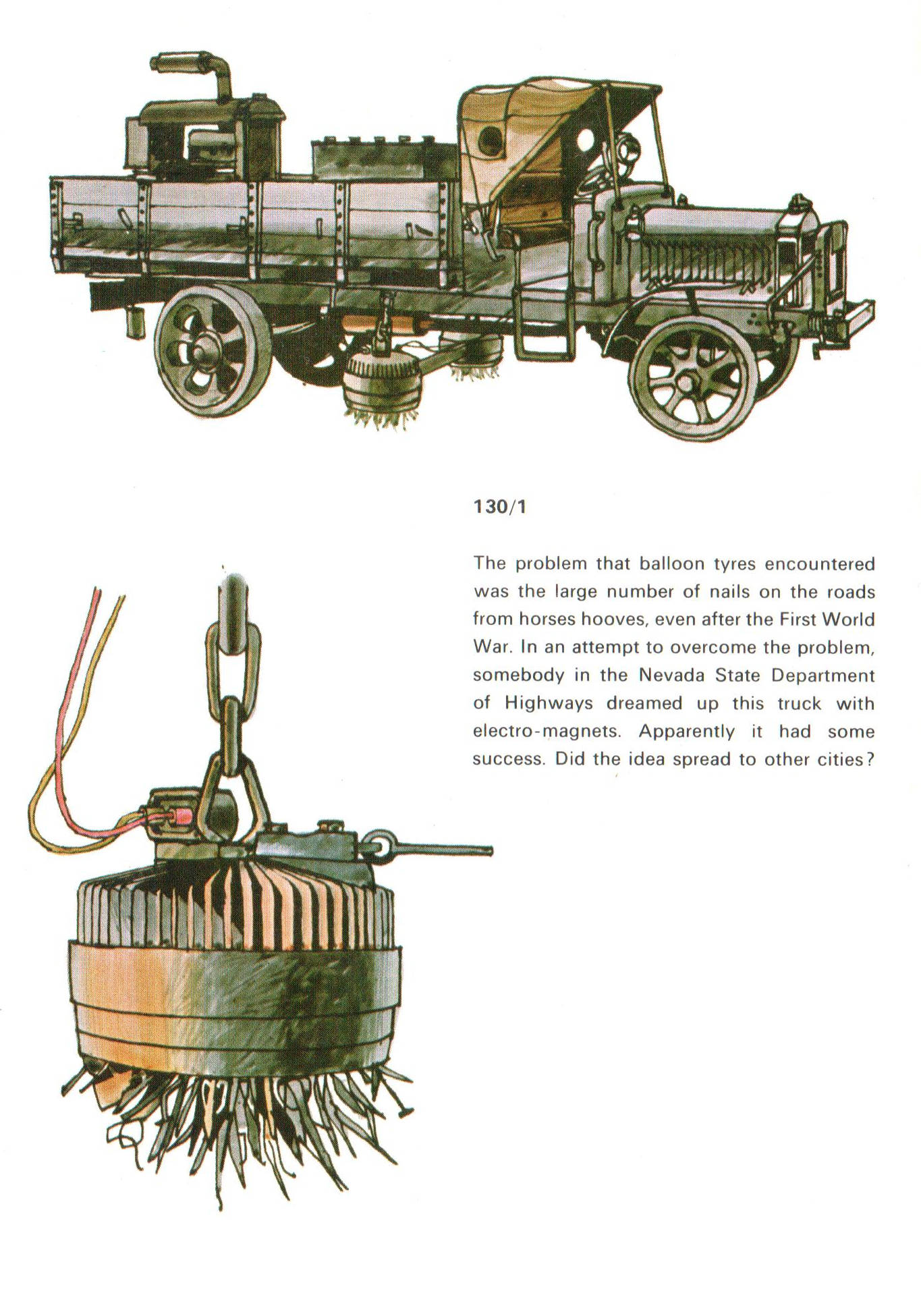 Well, the truck was definitely real, not an artists concept sketch. An image gallery at the Nevada Department of Transportation website shows the following picture: 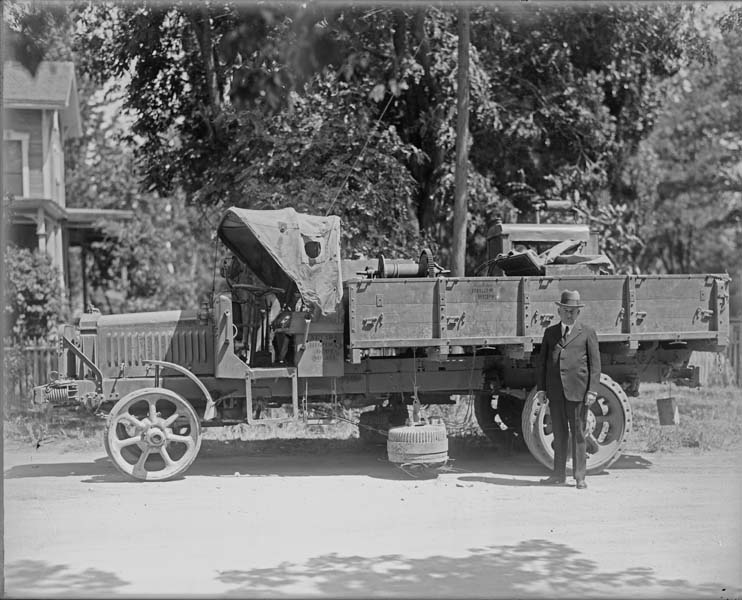 The caption simply labels it as an 'Early Department of Highways truck."

Many other interesting images in this gallery, Historical Image Gallery 1917-1939, which gives us a date range, but no other information.

Since the question has been edited to focus on the time, we can narrow this down. The book lists vehicles from 1897 to 1927, but the gallery from NDOT is from 1917 to 1939, so using these two date ranges we can conclude this truck ran sometime in the ten year span between 1917 to 1927.

Looks like we might be able to tighten that a little bit more. The truck this device is built on appears to be a WW1 era US Army vehicle known as the Standard B "Liberty" truck 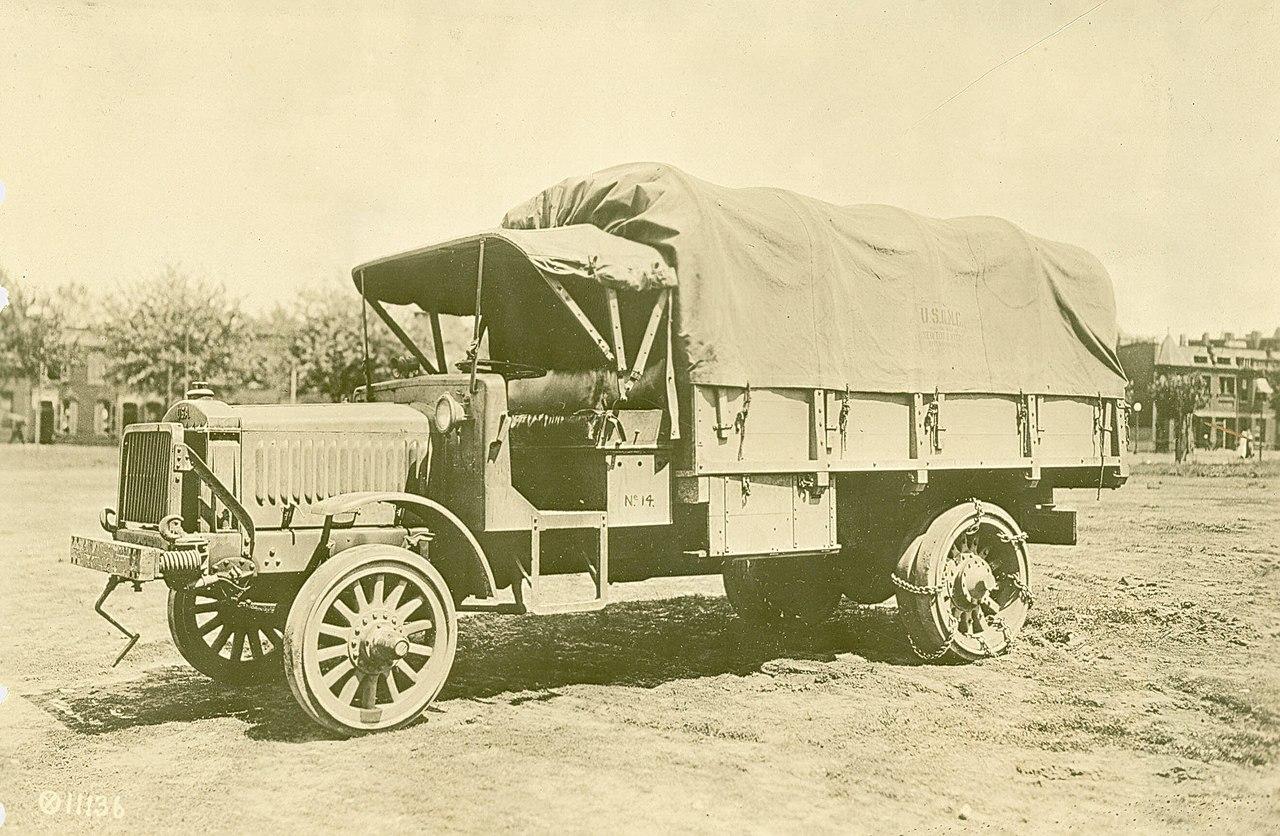 Since the wiki article states these trucks were prototyped in 1917, with first

official production of the First-type truck began in January 1918

We can assume this truck didn't reach civilian hands until some time after the armistice in November 1918.

Following the war, many Class-B Liberty trucks were sold-off surplus to the civilian market and other militaries.

Not the answer you're looking for? Browse other questions tagged 20th-century transportation metallurgy engineering nevada or ask your own question.

4
What was the technology in pre-war traffic recorders?

10
When did we begin using metal mesh platforms?
11
How did the Romans build straight roads that stretched very long distances?
4
When was first security screen door instaled in Seoul metro
16
When did streets get names?
32
How did people deal with ice on the roads during the horse-and-buggy era?
24
Was public transportation free in the Soviet Union?
13
Why did Chicago and other cities choose an L (elevated metro) when most others chose underground subways?
8
When did leaf springs appear in vehicles?
8
When (and where) did public polling start taking place on topics other than elections?