Cabin space on the Nadezhda

Nikolai Rezanov was Russian's envoy to Japan in 1804, sailing there in Russia's first circumnavigation aboard the Nadezhda. This originally English ship was outfitted for the voyage at government expense (Lensen, pp. 133). The captain's cabin was divided in two to accommodate Rezanov on one half (Moessner, pp. 68). As an Active State Councillor (rank 4), he far outranked Captain Krusenstern (rank 9).

Ambassador Rezanov had six men in his suite, including a Lieutenant of the Guards, an Adviser, an Artist, and a Doctor. In all 85 men were aboard, including two natural scientists, an Astronomer, another Doctor, and six officers (Moessner, pp. xxviii). Rezanov quarreled so badly with those officers that he retreated to his cabin for a portion of the voyage (Lensen, pp. 135); the imbroglio was censored by the tsar (Moessner, pp. x).

How big was half of the Nadezhda's captain's cabin? Did Rezanov's suite stay "en suite" with him? Did the doctors and scientists get a cabin or did they have to bunk with the sailors? 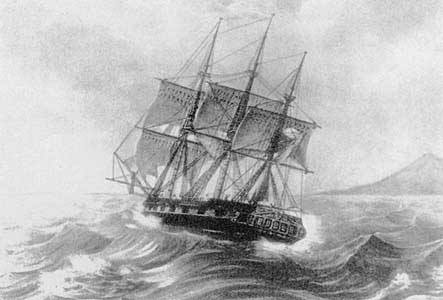 Unless someone is fortunate enough to come across the ships plans for the Nadezhda immediately prior to this voyage, I think that any answer is going to be largely speculation.

There are few surviving merchant ship plans so it's difficult to determine reliable averages for measurements such as cabin sizes. In addition, cabin partitions were considered fittings (which could be moved, removed and replaced as necessary) and so are often not rendered on ship's construction plans.

An analysis of 18th Century merchant ship interiors, gives an average of 202 square feet for the captain's cabin (with the largest example being 365sq.ft) while accomodation for the other officers gives cabin (if that's not too grand a word for them) sizes of 25-40 sq.ft.

Let's assume that the Nadezhda was overly generous in her captain's accomodation and that this was maximized for the voyage then we could guess that the total cabin space was ~400sq.ft. split equally between the captain (and his officers) and the ambassador (and his staff). In the case of Ambassador Rezanov, this would mean 7 men working (if not necessarily sleeping) in an area of ~200sq.ft. (10ftx20ft). That might seem large enough as an individual bedroom but as your working space for a long voyage that would start to seem pretty cramped.

I've been on board Zr. Ms de Buffel. Admitted, this ship was launched in 1864. It is not a sailing ship, but a steamship and a lot larger. The principle was the same, though. Accommodation for the captain was spacious. In fact, I wouldn't mind if my house was that large! The first officer had a large cabinet to sleep in, the other officers had smaller cabinets. I say cabinet, as it looked like cupboards. Everybody else slept in hammocks.

Rezanov may have outranked the captain on land, but definitely not at sea! There is one master on a ship: the captain. Everybody else is either part of the crew or passenger. Even the czar himself would - on board - not outrank the captain. But it would be a very brave (and foolish) captain to go against the wishes of the czar, of course.

The captain's cabin was used for many functions. For example, meetings could be held there. Or, as in this case, the cabin could be split to accommodate high ranking passengers. Very likely this is what happened. Rezanov would have fairly large accommodation for himself. This entourage would be accommodated to their ranks. The ship's officers probably would have to move to smaller accommodation or hammocks.

Scientists and doctors not part of the crew would almost certainly not get a cabin. At best they shared one with another officer, or they got a hammock.

This is to give you an idea. The Buffel was a much larger and far more modern ship. Thus, shorten everything a good deal to get the idea how Rezanov was accommodated. It is highly likely only the captain and Rezanov slept in beds.

Not the answer you're looking for? Browse other questions tagged russia naval architecture age-of-sail nautical or ask your own question.

9
Who was the first Russian in space (not Soviet)?
8
What's the best way to convert sailing-era burden to modern displacement?
2
When was the first sauna on a ship?
15
Did Yuri Gagarin really hear a ticking sound during his journey into outer space?
6
Did Peter the Great support a Russian circumnavigation?
0
Has there been a recorded account of a cabin boy inspiring mutiny on board a ship?
9
Why didn't the Trafalgar Way messengers sail up the English Channel?
6
How did the design of the hull differ between an Indiaman and a frigate?
4
Did Yuri Gagarin really mention Anna Magnani in his flight in space?