Could someone identify this uniform? The photograph is a tintype 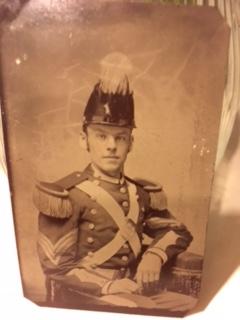 I am trying to identify the uniform worn by this confident young man. Is it a military dress uniform? The photograph is a tintype, so I think that the probable date is ca. 1860-1880.

The photograph was one of a group of family photographs given by the descendant to the local historical society; the family lived in Vermont. I am fairly sure that the young man was a member of this family; it is unlikely, in other words, that he was English, for instance. Other photos in this group can be dated to the 1870s.

The edit to the question gives us more information to go on (and please remember to include all relevant information when asking questions in the first place. It can save hours of unnecessary time spent researching in the wrong areas or with incorrect search terms.) But it also makes an assumption that an American from Vermont is not wearing a European based uniform.

You might want to refer to this document by the Vermont Historical society concerning civil war era uniforms.( Pdf pg 5, document pg 88) It discusses that fact that many of the militias had varied uniform styles, some opting more direct copies from European uniforms.

In the main, the volunteer regiments followed the Regular Army in the design and cut of their clothing, but many did not.

...There was a French outfit in New York called the Fiftyfifth Regiment, dressed in French uniforms; there was a regiment of Highlanders, the Seventy-ninth New York, which wore kilts and even wore plaid trews during its active service in the Civil War. You will see other regiments developing during the Civil War that wore uniforms ofFrench influence, especially the Zouaves and the Chasseurs.

So we can not eliminate the strong European influence this uniform shows.

The Highlander Unifom of the 79th New York state militia, for instance is very similar to the uniform being investigated, (except the kilt and jacket button pattern, and the kilt was a parade uniform item). 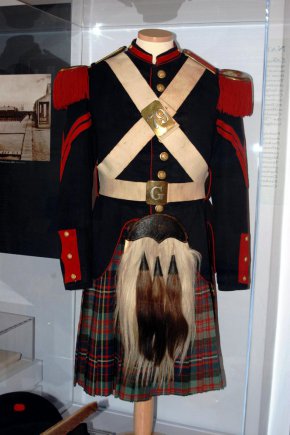 Some more images can be found on XmarksTheScot which also show the three-row button pattern, distinct cuff marking, and sergeants chevrons. None show the same headgear however.

Knowing Vermont was the individuals home is an important clue, but we can not eliminate uniforms from other locations. From Wikipedia, Vermont in the American Civil War

Vermont fielded 17 infantry regiments, 1 cavalry regiment, 3 light artillery batteries, 1 heavy artillery company, 3 companies of sharpshooters, and 2 companies of frontier cavalry. Instead of replacing units as they were depleted, Vermont regularly provided recruits to bring the units in the field back up to normal strength. ...Nearly 5,000 others served in other states' units, in the United States Army or the United States Navy.

Without more information such as the individuals name so the actual unit served in could be determined, it may be difficult to determine which exact regiment this uniform represents.

(p.s. This started as a comment, again. Hopefully it offers some useful insight, even though it does not fully answer the question. )

It looks like a Victorian era red coat uniform:

Not the answer you're looking for? Browse other questions tagged military identification uniform modern or ask your own question.