Why did so many ruling European families hold on to Catholicism during the Reformation?

If Protestantism favored secular power over religious authority, why did the Habsburgs, the Valois, and other secular ruling families hold on to Catholicism? Was it a matter of faith?

One reason was that a number of these Catholic "secular" kingdoms actually derived a lot of their power from the Church. Two of these were Spain and the Holy Roman Empire.

Ferdinand and Isabella of Spain (and some of their descendants) were (in)famous for the Inquisition. They were also known as "their most Catholic majesties." Because Spain had been divided, they derived a lot of their clout from the support of the church, against e.g the Muslim occupiers of Granada.

The French kings remained Catholic because it was important to the French people. In fact, Henry of Navarre (King Henri IV), converted from Protestantsim to Catholicism to win them over: "Paris is worth a mass."

Protestantism was the refuge of kings such as those of England, Denmark, and Sweden who wanted to defy the Church. These were the ones for whom the promise of secular power outweighed the prospect of support from the Church.

A somewhat blunt analysis, but Catholicism was hierarchical and prescriptive, Protestantism more personal and individual - the Bible etc in the vernacular. Kings were appointed by God. To oppose the king was to oppose God Himself - a pretty powerful argument! Cf the English Revolution 1688 when James II tried to claim the Divine Right of Kings'. Who is going to argue with God's chosen, anointed monarch?

They were Catholic, because their subjects were Romanised at a deep enough level to prefer being Roman Catholic. If you look at where the Roman empire's borders were: 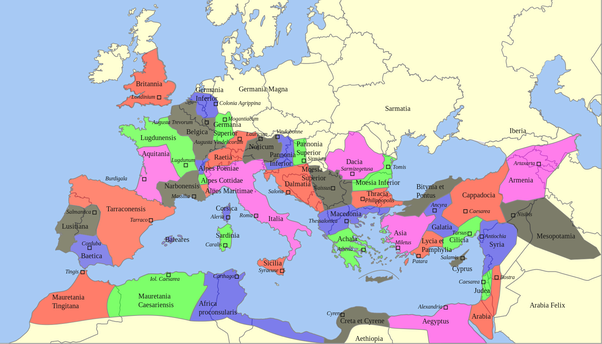 You can see that it very closely mirrors the dividing line between Catholics and Protestants. England could be said to be an exception, but rather it is a special in-between case, because they were more thoroughly de-Romanised by the Anglo-Saxon invasion and on the other hand, Anglicanism is way more like Catholicism with the serial numbers filed off and the King instead of the Pope, than "real" Protestantism, e.g. the Calvinism of the Scots to the north who weren't Romanised.

During the time of the Reformation there were only a few kingdoms in Catholic Europe except for a few dozen kingdoms in Ireland that aren't usually considered.

8) Kingdom of Aragon and associated kingdoms including Sicily, Sicily, and Sardinia - remained Catholic.

13) Kingdom of Hungary - Had meany Protestants but reconverted to Catholic.

Not counting Bohemia the score is seven protestant and 6 Catholic. Furthermore the Habsburg dynasty ruled the Castilian and Aragonese groups of kingdoms and Hungary and Bohemia, making about only four royal dynasties that remained Catholic. Without the Habsburgs most of Europe might have turned protestant instead of merely Britain, Scandinavia, and northern Germany.

Possibly the royal dynasties that remained Catholic did so because they thought that enriching themselves and their nobles by confiscating church lands was stealing.

Not the answer you're looking for? Browse other questions tagged europe reformation habsburg or ask your own question.

15
Was King Henry VIII, mid-late in his reformation campaign, motivated more by theology or absolutist drive?
42
Why were there no religious wars in Poland?
4
Why did many Hungarians support Maria Theresa?
59
How did the general population of England convert so smoothly to Protestantism?
35
What is the most number of times someone has become leader of a European country?
5
What authority did the Catholic Church have over European monarchs from 900–1450?
1
How were "Wehrbauern" (soldier peasants) in medieval Europe even a thing, at all?