How much did the culture of Anatolian Gallic settlers differ from their kin in Gaul?

It is known that some Gallic tribes emigrated to Anatolia in Roman era. In Livy's History of Rome, 38.16 - (cited from a reddit article), it is mentioned about their arrival to Anatolia by an invitation of Bithynia King and they settled down Taurus(known as a region around Ankara). This is all I know about these people. What about their lifestyle? Did they retain their habits in Gaul or did they experience change in their culture?

Those Galatians, or tribes in Anatolia of Celtic origin, sometimes even Gallic origin, were part of the south-eastern migration of Celts. This migration might also be called an invasion of the Balkans and Greece. Under Brennus they entered the greek peninsula in the third century (281 BCE) and thus before the Roman era for this part of the Mediterranean.

Splitting from this main movement in Greece the three tribes of the Tectosages, the Trocmii, and the Tolistobogii entered from Thrace to Asia Minor and Anatolia. Being invited by Nicomedes I. of Bithynia to serve as mercenaries in a dynastic struggle they soon became a plundering menace for the surrounding territories so that the Seleucid King Antiochus I. felt the pressing need to intervene. After he had beaten the invaders in battle the Celts were supposedly pacified by settling the survivors in central Anatolia around their capitals Ancyra (Ankara), Tavium and Pessinus. That region then became to be known as Galatia. The Galatians had a first clash with Rome in the Galatian war but only became a formal client state of Rome after Pompey reorganised the east in 64 BCE and it was integrated into the empire as a province in 25 BCE. 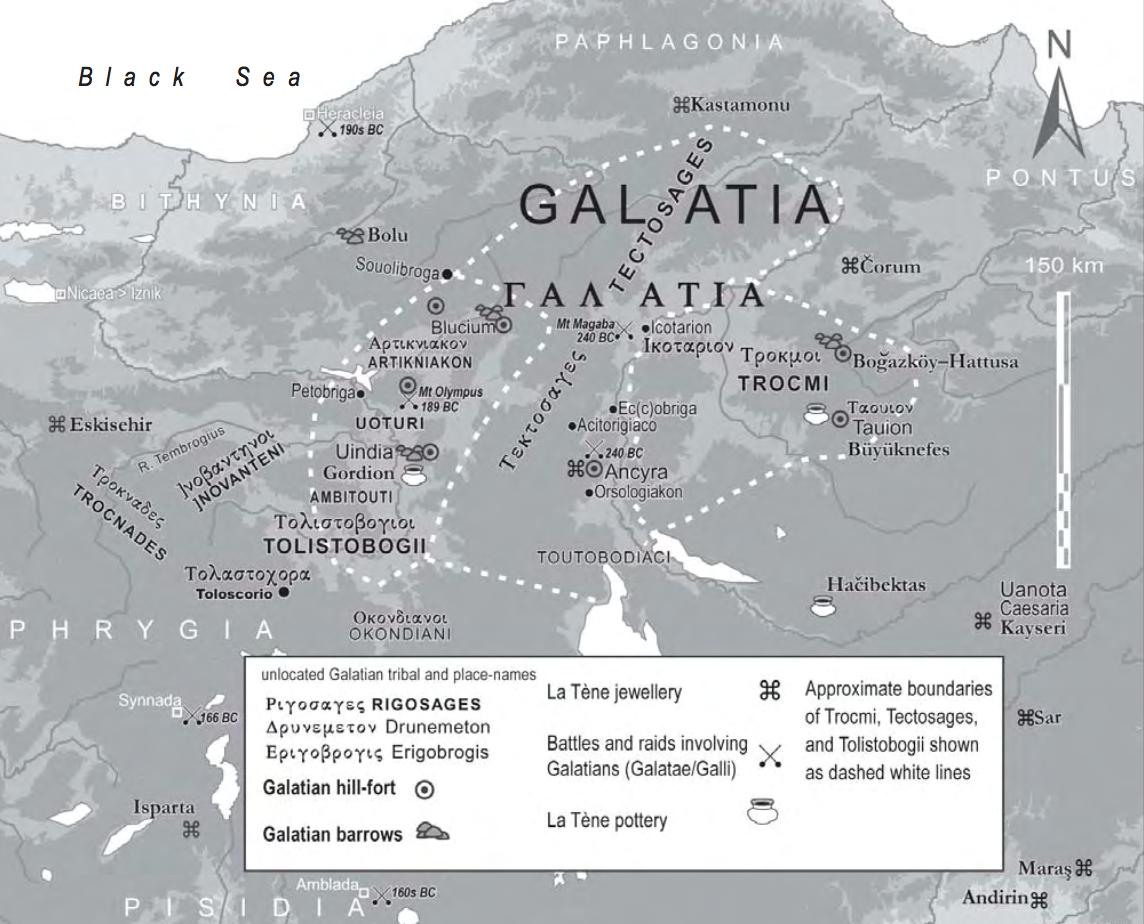 For the cultural development it should be clear that the Galatians were as Celtic as Celts can be before they split off from the main group in Greece. While they initially retained many aspects of their identity as Celts they gradually assimilated into the Greek-Roman-Greek surroundings. (Meaning they hellenised, adopted Greek customs, became Roman subjects and later Byzantine ones.)

The longest surviving aspect of their initial cultural traits might be the language they spoke attested to be very similar to those of the Treveri (in modern day Germany) as late as the fourth century CE. One explanation for that might be that they migrated with their whole families, making it much easier to keep the mother tongue alive.

As far as can be seen at the present time, Galatian shares a number of tendencies and developments with British and Transalpine Celtic (Gaulish) […] In other words, the very strongly Gaulish appearance of the fragmentary Galatian corpus seems to bear out St Jerome’s comparison. [p 788.]

Religion and tradition, especially law, was also for a long time quite similar to their gaulish brethren. They practiced human sacrifices (allegedly; mostly prisoners of war – archaeology seems to confirm hat) and had great reverence for Drynemeton (gallic: nemeton), an oak grove, that fits with Caesar’s account of the Gaulish druids. The Galatian telesphoros may be identical to the Hooded Spirits Genius cucullatus. Further, many Greek gods also were augmented with gallic cognomen: for example Zeus Bennios (Ζεὺς Βέννιος; Gallic benna, "car"). Some rivers were rechristened to Gallos (Γάλλος).

The finds from Bolu are the most impressive. In the westernmost of two tumuli in local Anatolian tradition, two gold torcs, two gold bracelets with dog’s- head terminals, a bronze horse bit and a gold belt buckle with a depiction of a bearded and moustached man’s face were excavated (Firlati, American Journal of Archaeology 69.365–7). Similarly, at Karalar, a gold torc was discovered in one of the three excavated tumuli. (Note in this connection that torcs of characteristic La Tène type are clearly represented on the statues of Galatian warriors produced at Pergamon.) […]
Generally speaking, all these finds which have been deemed ‘typically Galatian’ […] are most probably not imports from central Europe, but rather local derivatives of La Tène material. (p 787.)

Burial rites seem to be among the customs the Galatians adopted at the earliest point from their Anatolian Greek neighbours.

An important divergence was found that in later times the cult of Attis and Cybele spread far among the Galatians. Priests of that cult were called Galloi again. They performed the most colourful initiation rites for their priests and adherents involving ecstatic chants and dances, self-castration etc. This raging menace of a party is most vividly captured by Catull's carmen 63. If you imitate the correct metric and pronunciation this results in the rhythm of the cymbals used in the processions. A rhythm that was said to directly cause insanity.

This widespread cultic manipulation of genitals had the most profound repercussions when Paul the Apostle wrote his letter to the Galatians arguing that circumcision is not needed and actively discouraged for future Christians.

Rendered rather imprecise in the NIV to:

As for those agitators, I wish they would go the whole way and emasculate themselves!

Over the course of 700 years the people known as Gauls, then Galatians assimilated slowly into their surroundings. They kept different aspects of their culture they shared with other Celts longer than others and started to developed some distinct features of their own. By the start of the medieval period their traces are lost.

Not the answer you're looking for? Browse other questions tagged ancient-history ancient-rome cultural-history celts asia-minor or ask your own question.

46
Where did the Gaels originate?
4
Did the roman conquerors have directives/guidelines to either integrate or assimilate foreign tribes/folks?
11
Did the Gallic army besieged in Alesia conduct itself well when expecting relief?
9
Did the Romans “copy” their political system from the Greeks?
19
How much of an impact did the Roman emperors' civil wars have on their decision to debase the coinage?
8
How did the Greeks and Romans move between their destinations?
5
How did Tetricus, the last Gallic Emperor, obtain his agnomen?
10
How was the Roman army in fact organized during Caesar's campaigns in Gaul?
32
Did ancient Romans anticipate the fall of Rome?
18
How did the Druids learn the Greek language by the time of Caesar's campaign in Gaul?