Why is the border between Myanmar and Thailand so long?

The border between Myanmar and Thailand extends all the way near to the northern part of Malaysia. Is there any reason how this came to be?

Given that Thailand and Myanmar has been at war numerous times in history, wouldn't Myanmar be very vulnerable given the need to defend an area so far from the main block of land?

I'm not sure if this should be here or in history, but it seems more about geography than history.

The long border is due to the Burmese control of the Tenasserim Coast (also known as Tanintharyi), the region between the border and the Andaman Sea. The predecessors of both countries have fought numerous wars over the coast. If you look at the Wikipedia list of Burmese–Siamese wars, many of the wars had the conquest or defence of the coast as their main goal.

The current border was the result of two wars at the late 18th century. The Burmese Konbaung dynasty captured the northern half of the territory in 1760 and then the rest in 1765-67. As you have guessed, the territory were contested in subsequent wars, but neither country managed to gain territory on this front. As Wikipedia puts it,

In the following decades, both sides tried to extend the line of control to their advantage but they both failed. The Burmese used Tanintharyi as a forward base to launch several unsuccessful invasions of Siam (1775–1776; 1785–1786; 1809–1812); the Siamese too were unsuccessful in their attempts to retake Tanintharyi (1787 and 1792).

Also note that the border runs through a mountaineous area called the Tenasserim Hills, which acts as a barrier between the two states. 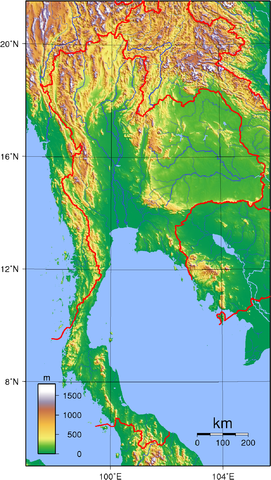 The geographical / strategic point made in the question helps to explain how the Konbaung Dynasty lost control of Lower Burma to the British in 1852. But ironically, were it not for British control of that territory, the eastern part of it may very well have been absorbed by Thailand; the Mon people who dominate the region have had much better relations with Thais than Burmese.

Not the answer you're looking for? Browse other questions tagged thailand border myanmar or ask your own question.

4
When and how did Thailand cease to be Siam and become the modern Thailand?
26
Why is Thailand considered an Axis power in WWII?
9
Why didn't Thailand have to pay more for its involvement in WW2?
4
Was Abu Simbel also designed to serve as a border between Egypt and Nubia?
3
Border crossings between USSR and Afghanistan in the 1960s
0
What was the actual dispute that triggered the March 2013 anti-Muslim riots in Myanmar?
13
Why do some 17th and 18th century maps depict Ottoman sanjaks north of the Danube in Wallachia?
10
What was the border regime between Poland and Czechoslovakia like during the 1970s and 1980s?
4
When and why was the 55th parallel established as an administrative boundary in Quebec?