I need a listing of some of the most influential ancient Roman virtues for a book I'm writing. There is a great list, just what I need, here on Wikipedia: https://en.wikipedia.org/wiki/Virtue#Roman_virtues

However, they don't provide any citations for it at all. My preference would be to find a single reputable reference that includes a listing like the one at Wikipedia. Failing that, I'd like to find the smallest bibliography of reputable references that collectively defines a similar list.

Thank you for your help.

I suspect that most of the personal virtues in the list were extracted from the Conspiracy of Catiline, by the Roman Historian Gaius Sallustius Crispus. He defined a number of what he though of as typical Republican Roman virtues.

He went on to argue that they were in the process of being corrupted because of the influx of wealth.

However, I don't think you're going to be able to find anything like a single source for the whole list.

Another famous source would be Cicero who wrote at about the same time as Sallust. For example, in De Legibus he remarked that good people have Mens (mind), Virtus (courage), Pietas (piety), and Fides (faith). All good, Roman, personal virtues.

And then, of course we have the concept of "public virtues" in ancient Rome, many of which were personified as deities. Examples here would include Bonus Eventus, Fortuna, nobilitas, Pax, and Securitas.

Notice that, of these, nobilitas (social rank) is the only one not to have been personified as a deity. This was also a concept that would change radically in the transition from Republic to Empire.

These public virtues are also sometimes known as the mores maiorum, or "ways of the ancestors". As unwritten rules, these are, not surprisingly, hard to tie down exactly. Some were mentioned, in passing, by Roman authors, For example, Juvenal in his Satires says:

Though fatal Pecunia (Cash) has no temple as yet

To dwell in, and as yet we’ve set up no altars to money,

Or Concord, with clatter of storks when we hail her.

Others were portrayed or inscribed on objects like coins, or the shield presented to Augustus by the Roman Senate which, as the marble copy below shows, bore the inscription: 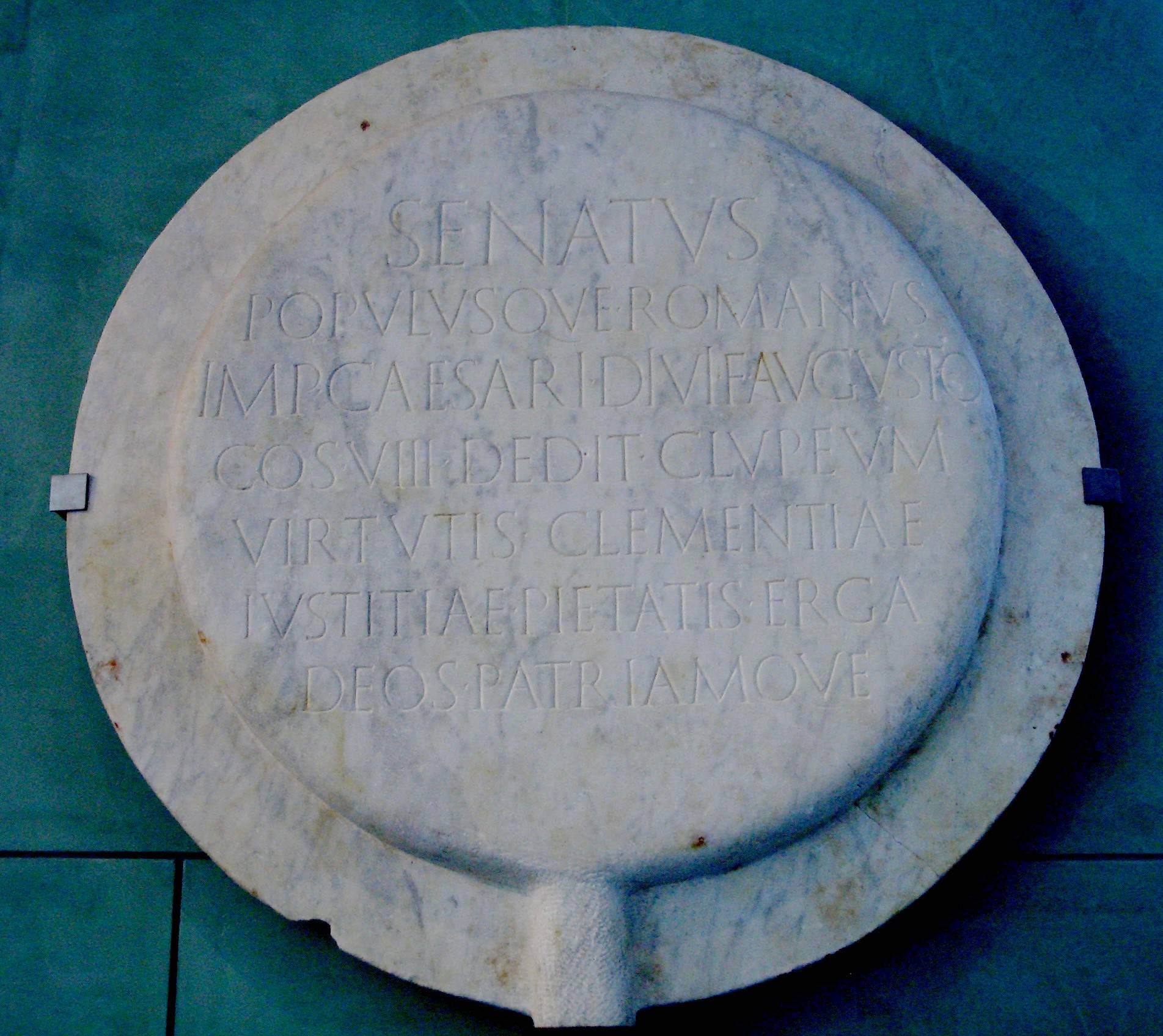 Several sites in addition to Wikipedia have fairly complete lists of the virtues, both private and public. I've haven't yet seen a fully sourced one, but the list on nova Romana at least seems fairly complete.

A useful text that discussed the virtues, and at least some of the sources is The Roman Virtues by Harold Mattingly. (It should be available to read free online at JSTOR, but either their site is down right now or the Internet connection on mt phone is playing up)

In my research, I came across this statement from historian Peter Gay:

In the beginning of his Meditations, the Emperor Marcus Aurelius elaborated a veritable catalog of qualities which, all together, made up the virtues which Cicero had called humanitas and which the philosophes hoped they possessed in good measure: modesty, self-control, manliness, beneficence, practicality, generosity, rationality, tolerance, and obedience to the dictates of nature.

The original fulltext by Marcus Aurelias is available at http://www.gutenberg.org/ebooks/2680

The virtues Gay mentions are not so much directly listed, as they are implicit in the list of traits Marcus Aurelias describes himself as being grateful for, as having learned from friends and mentors.

Not the answer you're looking for? Browse other questions tagged ancient-rome roman-empire roman-republic reference or ask your own question.

3
What was the role of the college of consuls in Ancient Rome?
14
Were Roman marching songs still bawdy during principate/dominate?
1
List of Roman Imperial Coins ~0 CE/AD
2
Is there any sort of list of Roman senators?
24
What are some Chinese sources testifying the extreme weather events of 535-536 CE?
27
Was Rosie the Riveter sourced from a Michelangelo painting?
4
What ancient Roman(s) wished houses were made of transparent walls?