What factors permitted Buddhism to be successful in Japan but Christianity less so?

From reading The Samurai and the Sacred, it looks like Buddhism achieved acceptance into Japanese culture due to its willingness to assimilate with the (already present) Shinto religion. Conversely, those who originally brought Christianity to Japan did so in a way that prevented it from being assimilated (due to its exclusionary nature). Is this the primary factor that prevented Christianity from initially being successful in Japan or is there a better reason?

Tokugawa Ieyasu banned it in 1614 for one. You would be killed for being a practicing Christian up until the Meiji restoration. Think about it like this. You've got Europeans coming in. They are seen as a direct threat[1] to your power base built on the divine authority of the God Emperor and the Shogun, his personal representative. The Buddhists don't claim that Siddhartha Gautama was divine in the sense that Jesus was supposed to be divine. The Japanese nobility saw a threat to their power from the outside and lopped off its head before it could really take root[2].

One point to mention is that Christianity does not mix well with other religions as Noldorin notes, basically you are a Christian and that is it. Buddhism is more of a philosophy than religion (my view considering my wife's Buddhist faith) and while they pray to Buddha it's more of an ideal to shoot for, how you do that can be open to interpretation. If you have some other belief system at the same time and it doesn't interfere then that is fine. Christianity on the other hand likes to dominate and BE the only religion, especially at the time when many representatives of the church went to convert people.

EDIT: Certain aspects of Christianity have been tolerant of others over time, though looking at one of the Ten Commandments where it notes that there can only be one God its hard to be a Christian and be polytheistic. While it can be stated that there are examples of tolerance on Christianity's side, the type that went to Japan was strict and exclusionary which didn't allow it to mix.

From The Samurai and the Sacred (pp. 110-111), the critical moment that went against Christianity appears to have been the San Felipe incident, which culminated in the martyrdom of the Twenty-Six Saints of Japan (emphasis added):

In October 1596 the San Felipe was wrecked off he coast of Shikoku. Hideyoshi ordered that the cargo should be confiscated, and the ship's pilot, hoping to forestall the action, became very belligerent. He threatened Hideyoshi's officials, warning them of the power of his Spanish masters and the wealth and resources of the Spanish Empire. His loose tongue also spoke of the way that previous Spanish conquests had begun - by 'softening up' the target country using priests. The story got back to Hideyoshi, who began to suspect that the Spanish Franciscans were spies sent to prepare the way for the foreign invasion he had always feared. Knowing much about invading a foreign country, Hideyoshi was unwilling to listen to Franciscan protests that the Jesuits were trying to frame them.

Japan witnessed its first acts of martyrdom by the crucifixion on 5 February 1597 of St Paul Miki and companions: the Twenty-Six Saints of Japan. Their company, which consisted of six Franciscan missionaries, three Jesuits, and 17 Japanese laymen, died on a hill overlooking Nagasaki harbour. From this moment, the history of Christianity in Japan took a different turn. From being proud and confident the Christian enterprise slowly went into reverse.

Protestants didn't have an interest in proselytism, and they were allowed to trade freely.

The Spaniards, on the other hand, were trying to invade Japan through religion. Converting to Catholicism allowed one access to gunpowder, and thus, some Daimyos forced their people into conversion in order to gain a strategic advantage.

From a religious point of view, the Catholics pretended(?) at first to be a branch of Buddhism, and got along pretty well with the locals, but later changed into a strategy of religious intolerance, which turned most unconverted people against them.

When the Shogun authorities learned about the true nature of Iberian missionaries, they chose to expel them and kill anyone who weren't willing to forgo their new faith.

Remember that Christianity entered Japan quite late, in the 1500s to early 1600s. Mostly, initially, by Catholic Portuguese. At the time there was a split in Christianity in Europe, from Catholic & Prodestants. So the Catholics (at the time) were much more strict about the interpretation of their religion, and the Catholic Church is quite a hierarchial institution.

This meant, at the time, that Christianity being introduced into Japan was quite rigid.

The Portuguese, Spanish, Dutch, and English reached Japan during the 1500s. And many Jesuit priests were sent there to spread Catholic doctrine.

The two historically most important things they imported to Japan were gunpowder and Christianity, in the form of Roman Catholicism. —Wikipedia

The Japanese daimyo on Kyūshū welcomed foreign trade because of the new weapons and tolerated the Jesuit missionaries. Although many Daimyos converted to Christianity in order to gain more favorable access to saltpeter (used to make gunpowder), these missionaries were successful in converting large numbers of people in Western Japan. Between 1553 and 1620, eighty-six daimyos were officially baptized, and many more were sympathetic to the Christians.

In 1550, Francis Xavier, the founder of the Society of Jesus (Jesuits) undertook a mission to the capital, Kyoto. But in 1545, five years prior to that, Francis Xavier wrote King John III of Portugal, requesting an inquisition in the Indian state of Goa,

"The second necessity for the Christians is that Your Majesty establish the Holy Inquisition in Goa because there are many who live according to the Jewish Law and according to the Mohammedan Sect, without any fear of God or shame of the World. And since there are many Hindus who are spread all over the fortresses, there is the need of the Holy Inquisition, and of many preachers. Your Majesty should provide such necessary things for your loyal and faithful subjects in the Indies."

Although the Goa Inquisition was in India, It was requested by the same man that was starting a mission in Japan. And the Japanese could have easily found out about it, as they traded frequently with Portugal, whose main territory in Asia was in India. 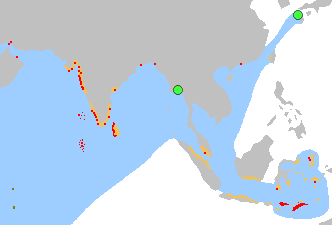 Now, during this time, the Daimyo Toyotomi Hideyoshi and his clan, Oda, were on trying to take over Japan. And By 1587, Hideyoshi had become alarmed, not because of too many converts but rather because the Christian daimyo reportedly oversaw forced conversions of retainers and commoners, that they had garrisoned the city of Nagasaki, that they participated in the slave trade of other Japanese and, apparently offending Hideyoshi's Buddhist sentiments, and that they allowed the slaughter of horses and oxen for food. That same year, Hideyoshi conquered Kyūshū and banished Christian missionaries to exert greater control over the Kirishitan (Christian in Japanese) daimyo (that's plural). And ten years later, on February 5, 1597, Toyotomi Hideyoshi had twenty-six Christians killed as an example to Japanese who wanted to convert to Christianity. They are known as the Twenty-six Martyrs of Japan. They included European Franciscan missionaries, Japanese Jesuits, and Japanese laymen including three young boys. They were executed by public crucifixion in Nagasaki. In 1614, The Shogun Tokugawa Ieyasu signed the Christian Expulsion Edict which banned Christianity, expelled all Christians and foreigners, and banned Christians from practicing their religion. As a result, many Kirishitans (early Japanese Christians) fled to either Portuguese Macau or the Spanish Philippines.

The question is... Why was Buddhism successful in Japan but Christianity less so? Here's what I think:

Not the answer you're looking for? Browse other questions tagged japan religion christianity buddhism or ask your own question.

11
Why was ancient Christianity more successful than the Roman pantheon and Judaism in gaining followers?
20
What strategic value did Christianity hold for Constantine that made him convert to Christianity?
16
What motivated Germanic tribes to accept Christianity?
18
Buddhism vs. Hinduism — what did it mean politically?
6
What was Marcus Aurelius's view of and interactions with Christianity?
2
What are the origins and history of shaking, trembling, jerking, contorting, collapsing, fainting and similar manifestations in Christianity?