Was the “music man” on target with his claims of “pool” being trouble in 1912?

The American show, "the Music Man," was first staged in 1957. (The movie was made in 1962.) In the show, the protagonist characterized the local pool or billiard hall as a place for gambling, swearing, drinking, etc. which did, in fact, reflect the perception of the late 1950s. a time characterized by "McCarthysism". The Wikipedia article said that by the 1990s, about 40 years later, the stigma had disappeared.

The movie itself, however, was set in 1912, a somewhat different time period, 45 years earlier. Were billiard parlors and the like then viewed in the 1950s light described above? If not, how did billiard parlors later gain their unsavory 1950s reputation? If so, how did they lose this reputation by the 1990s?

(One of the features of the movie is that it featured faux juxtapositions. For instance, the protagonist was shown to be a "con man" when he claimed to have graduated from a certain school in "aught five" (1905) and the local librarian discovered that the school hadn't been opened until 1906.) Thus, it's at least possible that the show "cut and paste" 1950s morality for its nominal setting.

It does appear to have been trouble, yes.

I present as evidence the Rover Boys series, which was popular juvenile fiction series published from 1899 to 1923, roughly akin to Hardy Boys/Nancy Drew novels.

The heroes were wholesome (but rambunctious) heroic young men, while their antagonists were written as low-class individuals of violent nature and imperfect English. Or as the Rovers put it, "..not our kind at all."

On at least one occasion, when the writer wanted a stereotypical nefarious den for the villains, he picked a billiard hall.

While the Rover Boys were making their purchases, Lew Flap and his cronies turned back into the tavern. There was a billiard room in the rear, and here they began to play billiards.

"We'll let the Rovers start for home first," said Rockley. "It will be safer that way."

From The Rover Boys In Camp, published 1904.

A parody cartoon of this series was produced in 1942 (after your requested time, but still prior to the 1950's), where the villain Dan Backslide was depicted as playing pool while doing his evil plotting, in a place described by the narrator of the cartoon as "a tavern of unsavory repute" (in case you didn't get it from the pool table). 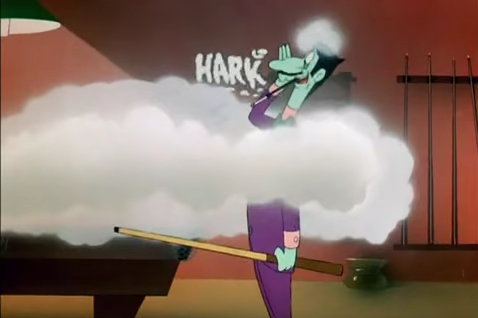 In the non-fiction realm, I found a reference in James E. Brunson III's The Early Image of Black Baseball where the author claimed that unsavory types could typically be found hanging out in pool halls in the African-American section of towns as early as the mid 1870's.

But there was always a bordello, billiard hall, saloon, or dance hall located in the colored part of the city, which formed the social headquarters of gamblers, well-dressed thieves, and confidence men.

I'm not entirely sure how that bad rep got lost, but I found multiple histories of billiards that claimed the sport's popularity surged after it was depicted in the popular film The Hustler in 1961. So that's a likely culprit. I know by the 1970s when I was growing up pool tables were commonly found items in family gaming establishments (like my community's rec center).

I'll address mainly the issue of why the stigma of pool halls had disappeared by the 1990s. The reason was that in the interim, a number of alternate sources of "badness" had arisen. This, in turn, was due to the rise of the casino society in much of the western world, which not only allowed, but glorified risk-taking. Going into the 1990s, America was just coming off an unprecedented crime wave in the 1970s and 1980s, which featured not only drinking, but drug use. And up to about 1950, drinking and swearing took place mainly in pool halls, saloons, and other places where "boys will be boys," but starting in the 1960s, became more mainstream as "girls" began to openly adopt male vices. In any event, pool halls maintained a more or less constant level of badness while the rest of society became worse, so by the 1990s, pool halls were not worse than the rest of society.

It should be noted that the 1950s were a period of unusual intolerance in American society. It's true that the 1910s were a relatively "halcyon" period in the U.S. Nevertheless, it was a period of tight but loosening moral standards that would soon segue into the Flapper Era of American society. So while the 1910s were probably less tolerant of pool halls than the 1990s, they probably did not match 1950s levels of intolerance.

Not the answer you're looking for? Browse other questions tagged united-states social-history or ask your own question.

8
What is the significance of “Flappers” in American history?

9
What was the social status of a man who failed the civil service exams in Imperial China ( 1200 - 1800 AD )?
8
What was the role of a 'Tidy Man' and what might their duties have been?
6
What was the estimated population of the Mississippi Valley before contact with Europeans?
2
Was there a time when George Washington discovered some of his soldiers absolutely refused to swear loyalty and obedience to the Continental Congress?
16
Was being in the KKK politically/socially acceptable in early 1900's American South?
10
Why was the Declaration of Independence handwritten, rather than printed with a printing press?
8
What was the first recorded instance of sex or violence being inappropriate for children to see?