Who governed London during the Great Plague?

The day-to-day running of London remained in the hands of the Lord Mayor. This from the National Archives:

The Lord Mayor and aldermen (town councillors) remained to enforce the King’s orders to try and stop the spread of the disease. The poorest people remained in London with the rats and those people who had the plague. Watchmen locked and kept guard over infected houses. Parish officials provided food.

The poster below is from 1646 but the orders therein are almost identical to the those of 1665. 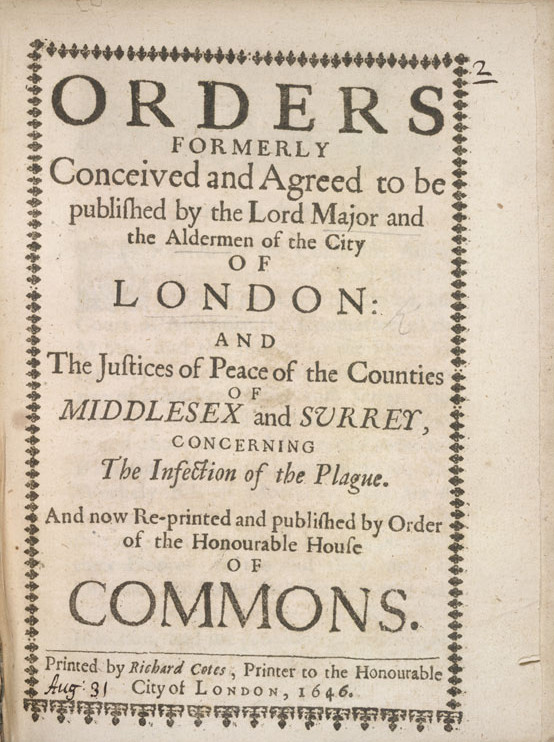 According to Wikipedia, it was the Privy Council (formal advisors to the king) which took the decision to start household quarantines. Once the plague was out of control (July), King Charles II moved to Oxford, which was where Parliament was held. Others who could also left London, including lawyers, merchants and doctors (!).

Not the answer you're looking for? Browse other questions tagged england government 17th-century london or ask your own question.

7
Were there ever instances of sailors pressed into British service in Europe ending up in the Caribbean?
22
How long did it take to get news of the sighting of the Spanish Armada from Land’s End to London?
10
How much time did people have to take shelter during the Blitz in 1940-41?
4
What was the social condition of a pregnant single woman in the late 1970s in England?
4
How long did it take for mail to get to London from New York in 1919?
3
How long would it take for a young lady in victorian England to walk this distance?
4
Would newspapers in 1890 London have printing presses in their offices?
2
Where did poor London women give birth in the latter half of the 19th century?