According to Gong Chu's Memoir, both CPC and KMT army officers wrote detailed reports after every and each battle. This kind of activity is called After-Action Review (AAR) in today's military jargon. Since both KMT and CPC officers were trained in the same school, the question that follows is this: which military, German, French, Russian or English, started this tradition and explicitly put AAR in their army doctrine?

The above answers are wrong. AARs are not just a report written about a battle after the fact. They are in depth discussions which include as many of the key participants as possible.

The purpose of a report is to simply record what happened from the perspective of just one person, usually the commander. An AAR on the other hand, happens as soon after the battle as possible, hopefully within hours. It gets the input and perspectives of the key participants with the end result of finding out what went right (and to keep doing those things) and what went wrong and how to correct the mistakes. The lessons learned are documented (preferably) and passed to other units and the army in general, eventually incorporating them into doctrine. This is one of the very important ways that doctrine is changed and improved.

As such, the AAR was first developed and used by the US Army in WWII and is one of the most important, if not the most important, thing that made the US Army so successful against its enemies. The Army was in a continuous state of learning from its experiences and passing it along to the entire force. Thus, the Army took to heart the adage, "if you don't learn from history, you are doomed to repeat it". Since the Army was dealing with such a huge expansion of itself through large scale conscription, it was absolutely necessary that they learn from their experiences. Also, it was a way to effectively react to changes in the enemy's actions, since they would sometimes change their tactics and techniques.

Anyone who has ever been involved in an AAR knows the difference between an AAR and a simple battle report. One is simply a record of events/actions and the other is an in depth learning tool.

An excerpt from Vol II: 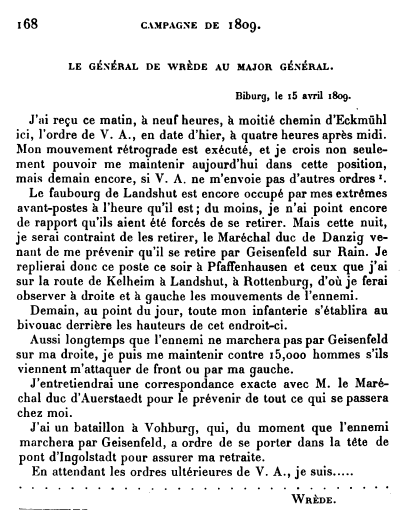 which I have (very roughly) translated as:

I have received this morning, at 9 o’clock, midway on the route between Eckmuhl and here, the order of Your Highness, dated yesterday at 4 in the afternoon. My retrograde movement is complete, and I believe not only can I maintain myself today in this position, but tomorrow as well, if Your Highness does not send me other orders.

The suburb of Landshut is now again occupied by my extreme advance posts; at least, I have not any new report that they have been forced to retire. But tonight I will be forced to withdraw them, [as] the Marshal the Duke of Danzig seeing my intent withdraws them by Geisenfeld to Rain. I will therefore withdraw the picket this evening to Pfaffenhausen and the one which I have on the route between Kelheim and Landshut, to Rottenburg, from where I will observe to my left and right the movements of the enemy.

Tomorrow, at break of day, all my infantry will establish a bivouac on the heights behind my position here.

Also if it ensues that the enemy does not march on Geisenfeld by my right, I can hold against 15,000 men if they attack me by my front or my left. I will maintain a precise co-ordination with M. the Marshal Duke of Auerstadt to inform him of everything which passes by this location.

I have a battalion at Vohburg which, at the moment that the enemy marches by Geisenfeld, has orders to carry itself into the bridgehead at Ingolstadt so as to ensure my retreat.

Awaiting other orders of Your Highness, I am … .

And this is just to ensure that (and which, as Berthier was causing the marshals to perform much retrograde marching until Napoleon's arrival in Bavaria) orders were received and correctly implemented.

It is very possible that the first full concept of an after action report originates at this time, as Napoleon originated the "Chief of Staff" concept with Berthier. (Note that at this time the designation "Major General" is a position, specifically that of Chief of Staff, and not a rank. Berthier was a General de Division (rank) and Marshal of France (properly a title, though often treated by its holders as a rank) like any other senior French Commander of the time.

The Prussian General Staff formation and army reorganization that was occurring at this same time would formalize the structure beyond Napoleon's "proof of concept".

26
Which WW2 belligerents provided military brothels?
3
Has the USA ever taken unilateral military action?
4
Which military commanders burned their own ships?
1
What military first used fire support bases?
9
First Roman battles after the Marian reforms
53
Has there ever been a case when a traitorous military commander took command again for the side he betrayed?
18
What ship is this and which military campaign?
4
Military reforms after the battle of Manzikert?
9
Can anyone point me to an online version of the 1900 amendment to the Franco-Russian Military Convention 1892?