What percentage of the British Empire's economy was profits from the opium trade?

Between 1820 and 1840 the British sold a lot of Opium in China. Compared with the total size of the British Empire's economy, how big was the Opium trade?

I find 50% that hard to believe, but I think it must have been significant. This source says:

In the fifty-year period from 1842-1880 opium revenue on average was 15% of India‟s total revenue, which is significant for a single commodity.

I'm interested in the earlier period of Opium trade. I have poked around, but haven't seen any quantitative estimates of how big the Opium trade was relative to the total economy of British Empire.

Edit: By "total economy of the British Empire" I mean something similar to the GDP of all the economic activity in India, England, Ireland, Wales, Scotland, Gibraltar, Australia, Burma, Canada, Jamaica, etc. All the economic area under the crown, if you will. In this chart it looks like in 1870 50% of the British economy was India, and 40% was UK. The correct answer will have as chart element like this for the whole British Empire in the 1820s, with a % for "opium"

There is no doubt that opium and tea formed a "commercial nexus" that became an essential element of the British imperial economy. Although the British government wasn't directly involved in the opium trade, import duties on tea provided 10% of British tax income. Sales of opium generated about one seventh of the revenues of the British East India Company in India [Robins, 2012, p156], and those revenues were used to pay for the tea that was sent back to Britain.

The table below shows the opium exports from India to China (in chests): 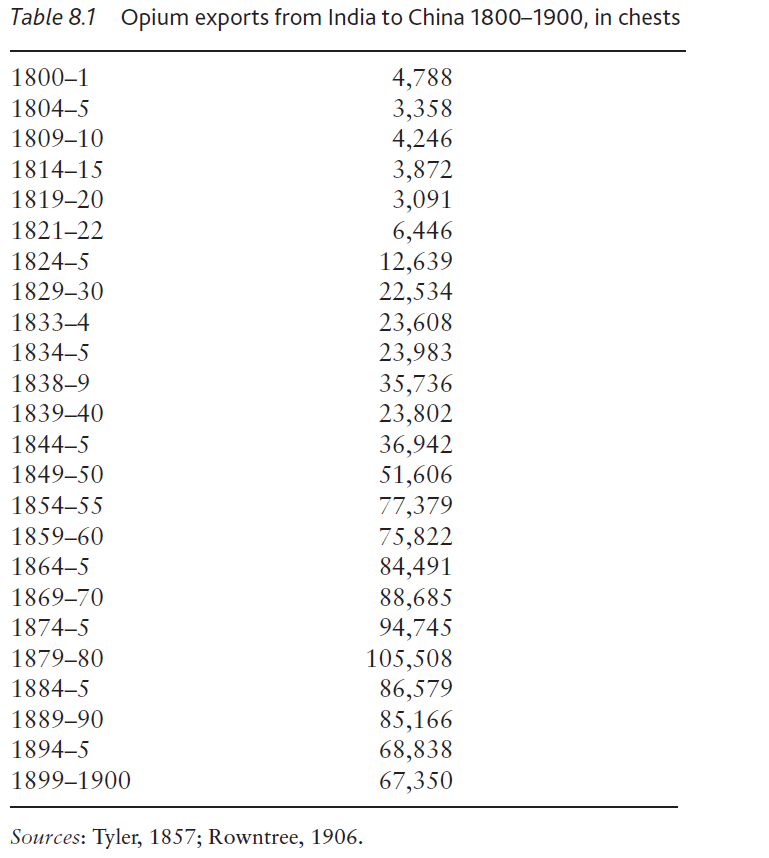 As you can see, the opium exports over the period that you are interested in, while nowhere near their peak, were nevertheless substantial.

In terms of profits, according to this site the approximately 24,000 chests of opium exported by the company in 1839,

The figure for 1825 was approximately half that exported in 1939, so it seems unlikely that it would have amounted to 50% of the Honourable East India Company's profits (never mind the profits of the British Empire as a whole!).

However, the Wikipedia page on the HEIC states that by 1825:

most of the money needed to buy tea in China was raised by the illegal opium trade.

This will help us estimate the contribution of the opium trade to the GDP of the British empire.

If you are interested in exact figures for the trade between India and China at that time, the UK government published a series of papers titled "Papers Relating to the Trade with India and China: Including Information Respecting the Consumption, Prices, &c. in Foreign Countries" in 1829 which should include the detail you're after.

For the British Empire as a whole at this period, the 1833 book Taxation, Revenue, Expenditure, Power, Statistics, and Debt of the Whole British Empire; Their Origin, Progress, and Present State by Antonio Pebrer provides valuable details. Happily, this particular volume has been scanned and made available from Archive.org.

From the above sources, we can attempt an answer to your question. (Please note that this answers the question as originally asked, rather than the later edits)

Estimates for the GDP of the British Empire vary widely. If you are interested in a discussion of the various methodologies that have been tried, there is an excellent discussion in What Was the UK GDP Then? A Data Study. Two examples quoted there are Deane and Cole (1967), who gave the following estimates:

and Veverka (1963) who, using a different methodology, obtained the following:

(quoted in What Was the UK GDP Then? A Data Study p34)

Since we already know that most of the money needed to buy tea in China in 1825 was raised by the illegal opium trade (see above), this also gives us a rough figure for the East India Company's revenue from the opium trade.

If we assume a roughly linear growth in GDP, then, based on the estimates above, the GDP of the British Empire in 1825 would have been something between £316 million and £420 million.

Assuming the mean value of £360 million, then the value of the opium trade was just under 0.5% of the GDP of the British empire in 1825.

If anyone feels inclined, most of the the figures required to generate a table - as requested in the later edit to the question - should be available in the sources listed below.

Not the answer you're looking for? Browse other questions tagged india china british-empire industrial-revolution drugs or ask your own question.

7
Why was Calcutta a node in the opium smuggling network prior to the Opium Wars in China?
4
What did the British Empire mean by "Free Trade" in reference to the colonies?
16
How profitable was India for the British Empire in the 1800s?
3
Did China's life expectancy at birth rise 30.5 years from 1960 to 1980? If so, what were the particular changes made to their society's structure?
11
Why did the British take Hong Kong instead of any other of the later treaty ports?
2
Why weren't the New Territories ceded to the British instead of leased in 1898?
8
What taxes were legally required to be paid in silver in Qing China?
2
Why did the First and Second Industrial Revolutions start in Europe?
28
Why were slave owners even offered compensation via the 1837 Act if they'd lost the power in parliament to stop abolition in 1833?