How long would it have taken to get to the Poconos in the early 1900s?

This website on the history of the Poconos states:

The Delaware Water Gap was the site of the first boarding house hotel, established in 1829 by Anthony Dutot, who initiated what would become a wildly successful resort industry. By 1900, thousands of visitors from the growing cities of Philadelphia and New York escaped to the high altitudes for summer vacations.

How would these visitors have made the trip? And how long would it have taken them?

Edit: I know that the train lines ran through the area, but I presume that there wasn't a line directly to each resort. If they only took the train partway, how was the rest of the trip made?

Initially travel would have been by boat up the Delaware river, later (also) via canal, by 1900 most likely via rail on the Delaware, Lackawanna & Western line, and then finally by automobile. Travel times for that varied from roughly half a day for the first method down to 2 hours for the last.

I found a nice map on the Delaware and Hudson Canal Wikipedia page that pretty much provides the transportation history for the entire area. Note the Delaware Water Gap in the middle on the lower third of the map. Its on the border of Pennsylvania and New Jersey, which is of course the Delaware river. 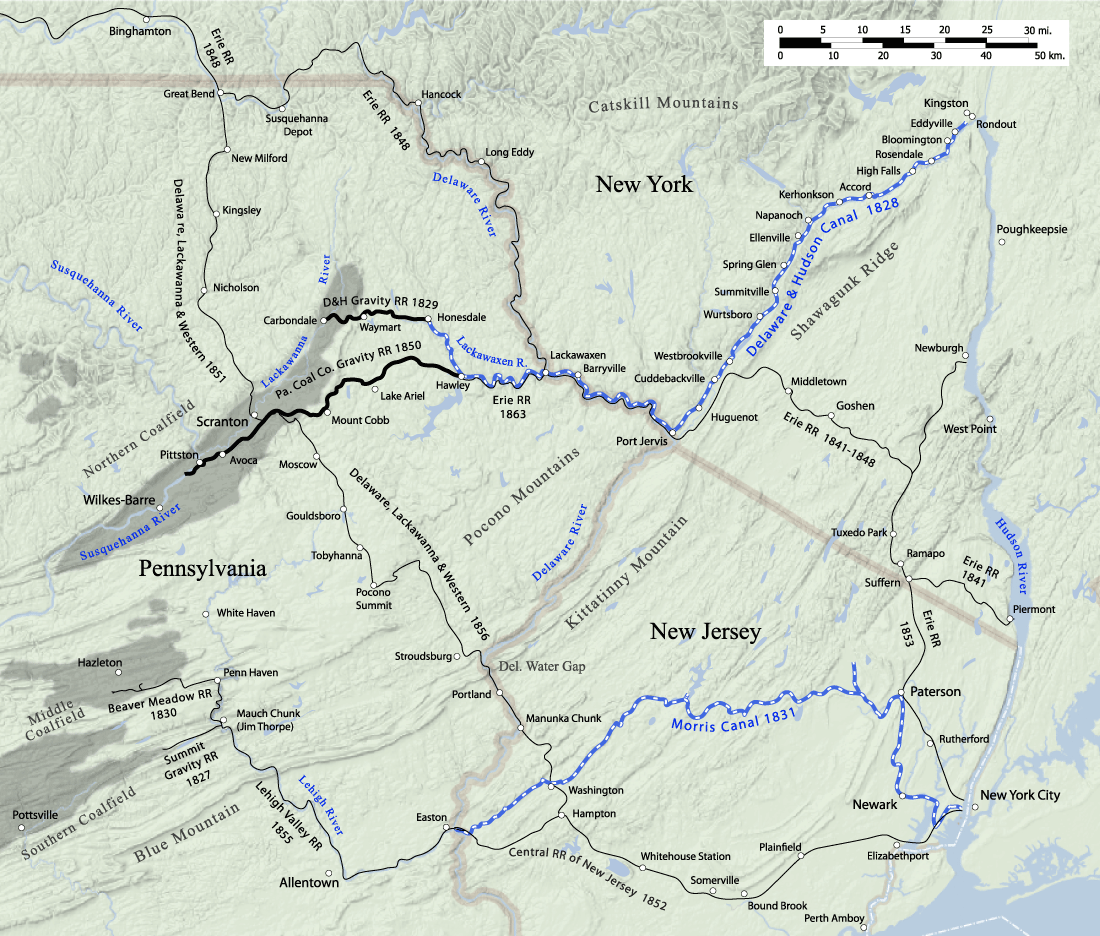 When that resort was first established in 1829, someone from Philadelphia could have got there by taking a passenger barge/ferry up the Delaware. Someone from New York could have done it either by taking a ferry up the Hudson, through the newly opened Delaware & Hudson Canal, and then downriver on the Delaware to the gap1, or by going to Philly and catching a ride there. It looks like the trip up from Philly probably would have taken about half a day on a steamship2.

However the Morris Canal was under construction at the time (presumably the owners of the resort knew this), and when it opened in 1831 New Yorkers could just catch a ferry through it to Easton, and then up the Delaware to the gap from there. That would have given New Yorkers roughly the same length of trip as Philadelphians.

In 1856 the Delaware, Lackawanna & Western line was opened, which would have allowed a traveler from New York to take a train there (via a Central Railroad of New Jersey junction at Hampton). That likely took on the order of a quarter of a day3.

By the 1910's road systems were starting to be put into place, which would have slowly improved the travel time (for those with access to motor vehicles), culminating in the opening of interstate 80 in the mid 1950's. Today Google Maps reports the trip by car via I80 as 2 hours.

1 - I'm assuming this stretch was navigable at the time. Couldn't find anything definitive on the issue.

2 - It seems to be roughly 100 miles upriver, good steamboats of the day would have averaged about 10mph. Factor in a couple or more for fighting the current, and that gets you to roughly half a day

3 - Again, having a lot of trouble finding good info on average speed of passenger trains of the era. The record in 1830's seems to have been around 30mph. Things obviously got much faster than that later. Most of the trip there would have been uphill, some of it over mountains, but its also a shorter distance than the canal route. According to a timetable user sempaiscuba dug up for his answer, by 1912 it could be as little as 2 hours, if you picked the right train.

As far as I can see, the most likely method of travel in the 1900s would have been by rail, very likely using the Delaware, Lackawanna & Western Railroad. Their network is shown on the map below: 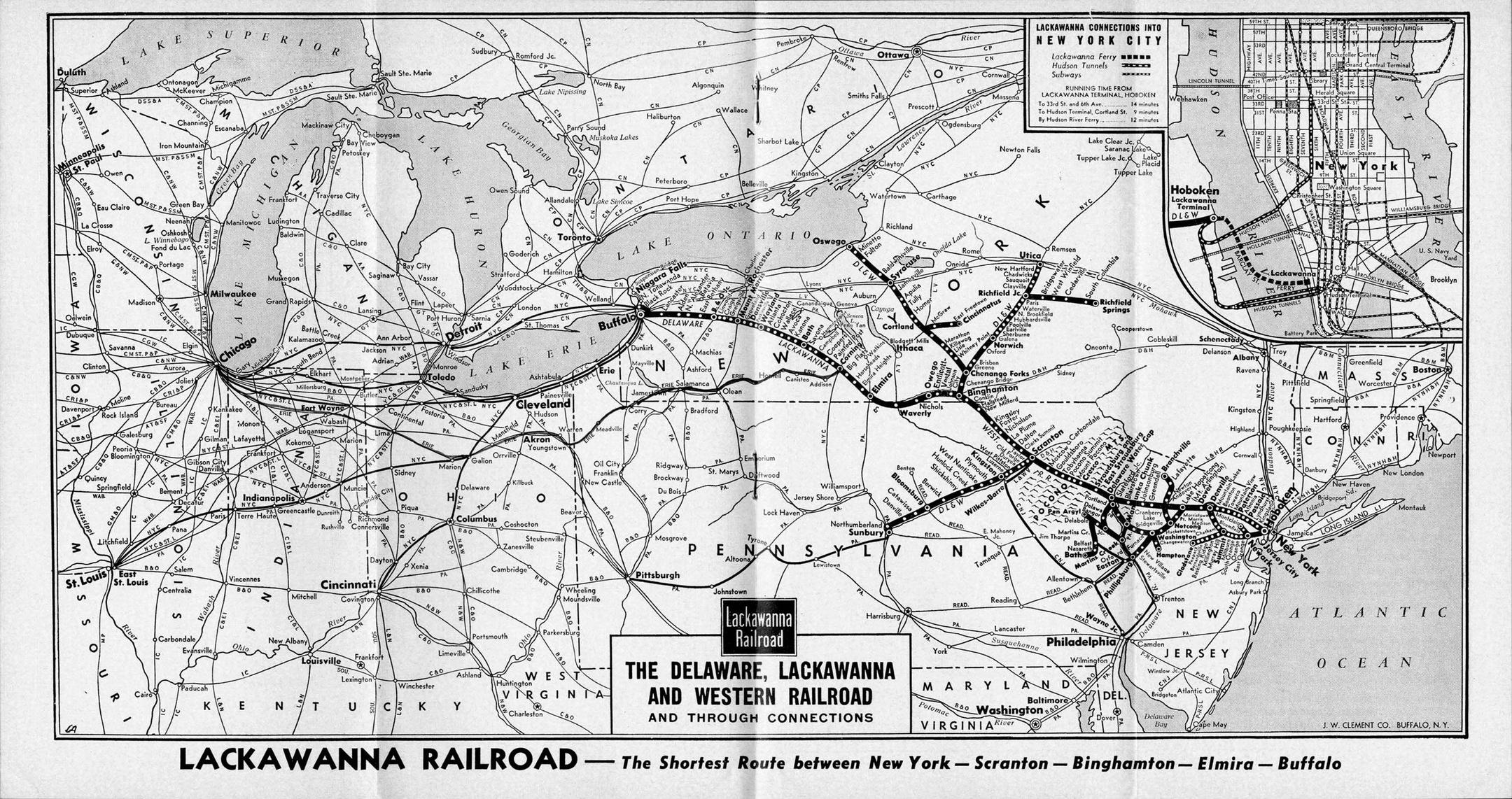 The Hoboken Historical Museum has a number of timetables for the Delaware, Lackawanna & Western Railroad in their collection, several of which can be viewed online. This example dates to 1912. Pages 11-12 show train times for the westward route.

Alternatively, you could depart from New York, West 23rd St, at 10:00, and arrive at Water Gap at 12:13, on the "Lackawanna Limited". That's an impressive journey time of just 2 hours 13 minutes!

Not the answer you're looking for? Browse other questions tagged 20th-century travel or ask your own question.