What color triangles did the different religious groups (those not Jews or JWs) wear in Nazi concentration camps?

I was recently reading through Anton Gill's 1989 book "The journey back from hell" regarding the experiences of concentration camp survivors.

On p.31 of this book he mentions that

There were several thousand priests, and members of religious orders of both sexes, in the camps

I do realize, as is shown in this other question, that Jehovah's Witnesses wore the purple triangles. According to Anton Gill's book there were 6000 of them in the concentration camps and he says (on the same p.31) that "they attracted the special enmity of the Nazis". So I am not sure if these are the reasons why they had their own triangle color.

Anyway, presumably they were not the only religious group, besides Jews of course, that was represented there mainly because of their religious beliefs(?)

For example, according to this Wikipedia article 2720 clerics were incarcerated at Dachau.

The question I wanted to ask is: what color triangles were assigned to the members of other religious groups, i.e. those that were neither Jews or JWs?

According to The United States Holocaust Memorial Museum site:

Criminals were marked with green inverted triangles, political prisoners with red, "asocials" (including Roma, nonconformists, vagrants, and other groups) with black or—in the case of Roma in some camps—brown triangles. Homosexuals were identified with pink triangles and Jehovah's Witnesses with purple ones. Non-German prisoners were identified by the first letter of the German name for their home country, which was sewn onto their badge. The two triangles forming the Jewish star badge would both be yellow unless the Jewish prisoner was included in one of the other prisoner categories. A Jewish political prisoner, for example, would be identified with a yellow triangle beneath a red triangle.

There is also an image/ chart on the site. It is also shown on the Nazi concentration camp badge, which has quite a bit of other info concerning these markings. 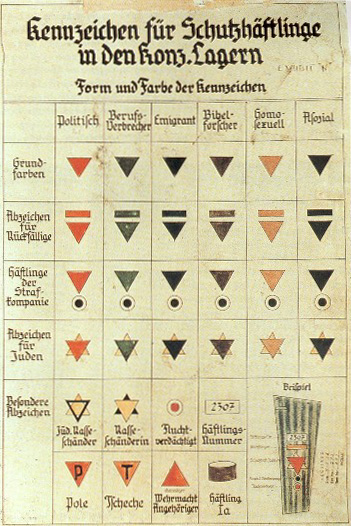 After some further information added in the question, the red triangle is listed at this blog site as being applied to "dissenting Christian priests". So no special color was awarded to them, as mentioned in comments,it appears they were classified as general political prisoners along with:

Another work, Jehovah's Witnesses in National Socialist Concentration Camps, mentions small numbers of other denominations being classed with purple triangles:

The concentration camp prisoner category 'Bible Student' at times apparently included a few members from small Bible Student splinter groups, as well as adherents of other religious groups which played only a secondary role during the time of the National Socialist regime, such as Adventists, Baptists and the New Apostolic community

So it appears different color badges, but still within the original color selections, may have been applied to various religious denominations.

Not the answer you're looking for? Browse other questions tagged world-war-two nazi-germany hitler holocaust or ask your own question.

21
What were the 52 kinds of victims persecuted by the Nazis?
12
Did Christians ever use crucifixion as punishment?

37
What was the purpose of Nazi extermination camps?
41
What did Germany do in World War II about the different rail gauge in the Soviet Union?
1
Did Nazi Germany suffer hyperinflation during the war? Why or why not?
5
Did the Nazi regime always or often prioritize transport trains to the death camps over military transport?
6
How many people died in the nazi concentration camps and death trains and marches?
9
Why did the Irish Free State suppress news of the Holocaust in 1945? Reaction once it became known?
0
How did conditions in Nazi labor camps and the Gulag compare?