Did the Romans install offensive statues in the temples of conquered territories?

In her book Revelations: Visions, Prophecy, and Politics in the Book of Revelation, Princeton professor and religious scholar Elaine Pagels notes that when the Romans conquered a new territory, one of their signature moves was to remove whatever altar might exist in their local temple — often that of a goddess — and replace it with a statue of a Roman soldier enslaving or even raping an indigenous woman. The message is as unambiguous as it is brutal. Source

Well - is this actually true?

The infamous Judaea Capta comes to mind, of course, but it is a coin.

There actually are a number of sculptures depicting victorious Romans dominating the national personifications of subjugated peoples. Nonetheless, the Medium post fundamentally misrepresented Professor Pagels' book. In her Revelations: Visions, Prophecy, and Politics in the Book of Revelation, Elaine Pagels traced the life of John of Patmos who wrote the Book of Revelations after the Romans vanquished Judea. During this, she commented on the disgust or anger John probably would've have felt seeing sculptures celebrating Roman victories over other nations under imperial rule, at the Sebasteion in the ancient Hellenic city of Aphrodisias. 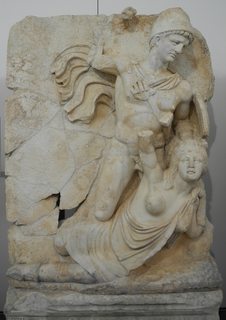 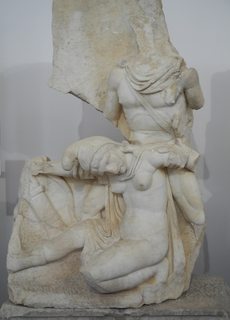 However, she then adds that:

The citizens of Asia Minor who commissioned the Sebasteion and funded the annual festivals, sacrifices, and athletic games to honor the emperors chose to interpret their submission to Roman rule not as defeat but as submission to the will of the gods.

In other words, Professor Pagels was not claiming the Romans systematically went out of their ways to humiliate their new subjects and offend their religions. And indeed, the examples cited above were created by Greeks and depicted the conquest of non-Greeks.

In general, the Romans were reasonably tolerant imperialists. The Romans usually equated foreign deities with their own through process of interpretatio romana. By this very logic, it is difficult to imagine their "signature move" would be to desecrate altars to the same gods they recognised.

This process greatly helped the integration of Roman and conquered, for the Romans were extremely tolerant of foreign religions provided there was no suspicion of political conspiracy (they strongly disliked closed groups and societies) and the rites were not so repugnant as to be intolerable (such as human sacrifice).

There are several goddesses that have not been equated to Graeco-Roman deities, who are often depicted together with Roman gods. However, they are normally portrayed as equals. For instance Nemetona, the goddess of the Nemetes people, often appears with Mars without any indication of the kind of subjugation that the Sebasteion reliefs above depicted. 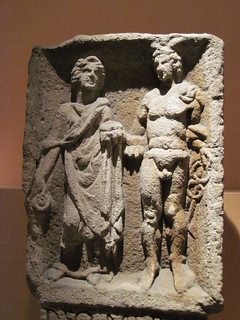 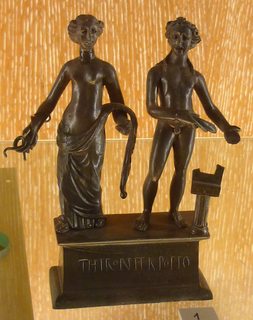 While at first the Jews were largely left to their own devices – even after the Great Jewish War – this changed quite substantially after the Bar-Kokhba revolt.

After things were finished up in Judea the city of Jerusalem not only had its name changed to Aelia Capotilina but also the Temple Mount was razed and a whole temple dedicated to Jupiter Capotilinus erected in place of the second Temple.

For Jews you can hardly be more offensive than that.

But this is one of very few instances that the Romans before Constantine really imposed their religious views and disregarded what the locals felt about these issues. While it apparently should not be called 'tolerance' any longer, Roman religious policy was at least far more respecting to indigenous religions as to make this "erecting offensive statues" not the general norm.

The usual process was: They just added to their own pantheon and requested similar worship from the locals for the state religion.

This is a very broad question, and the answer is almost certainly yes. At some point somewhere no doubt a number of romans did exactly that. It was a massive empire spanning a huge area over a substantial period of time.

It certainly wasn't their only approach though, here in Britain they would also subsume the existing deities into their own belief system and by doing so bring in the natives as well. This is similar to how Christianity absorbed the traditional pagan harvest and midwinter festivals into their own rituals.

For example at Bath in England the Romans found the sacred hot spring and built the Temple of Sulis Minerva there. Minerva is a Roman god so on the face of it that seems to go against what I'm saying, but Sulis was not a Roman god. Sulis was the goddess of the Celtic Brythons. What the Romans did was come in and say "No, you are right. Sulis is a godess and this is her holy spring. But Sulis is just your name for our Godess Minerva."

See more information on Wikipedia about the hot springs and about Sulis.

Not far from the crossing point of their road, they would have been attracted by the large natural hot spring which had been a shrine of the Celtic Brythons, dedicated to their goddess, Sulis. This spring is a natural mineral spring found in the valley of the Avon River in Southwest England, it is the only spring in Britain officially designated as hot. The name is Latin for "the waters of Sulis." The Romans identified the goddess with their goddess Minerva and encouraged her worship. The similarities between Minerva and Sulis helped the Celts adapt to Roman culture.

Not the answer you're looking for? Browse other questions tagged ancient-rome religion or ask your own question.