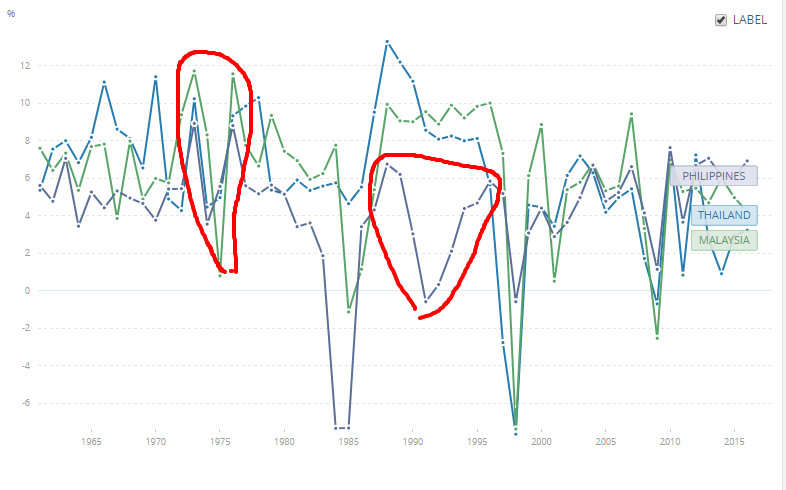 Here is a better version of the graph (click to enlarge).

As you can see, the first dip follows, and can be nicely explained by the 1973-4 oil shock as @sempaiscuba commented. The second period you highlighted, however, actually bottomed out only in 1991, four years after the 1987 stock market crash. The Hang-Seng Index for the Hong Kong stock market, where Black Monday began, had actually returned to its pre-crash value by 1991.

Rather than the stock market crash, the early 1990s recession in the Philippines was actually due to a combination of long term macroeconomic weakness, natural disasters, the oil price shock, and general global economic downturn.

Beginning first in 1989, a drought hit the agricultural sector, at the time almost 1/4 of the Philippines economy, hard. Next the islands were struck the twin disasters of the Luzhon Earthquake and Typhoon Ruping. Together they killed over two thousand people and inflicted billions in damages. Then Mount Pinatubo erupted, killing almost another 1000 Filipinos. Agriculture was once again devastated by millions in damages as hundreds of thousands of acres of crops were wiped out along with nearly a million livestock.

In addition to the series of unfortunate events, the global economy went into a downturn due to an oil price shock induced by the Gulf War. The weakness of the economy of the Philippines came to the fore under these pressures. Notice how while Thailand and Indonesia did fine, the Filipino economy crashed in the mid 1980s. Dictator Ferdinand Marcos, who was in power until 1980s, left behind a huge debt - over $60 billion. Inflation and unemployment were both well above 10%.

The cumulative effect of all these is that the Filipino economy lost $3 billion in 1990 and 1991 - representing about 5% of the Gross National Product at the time. Hence the sudden drop you see on the GDP growth charts.

Not the answer you're looking for? Browse other questions tagged economy indonesia philippines thailand or ask your own question.

4
When and how did Thailand cease to be Siam and become the modern Thailand?
7
What happened to the holders of German war bonds after WW1?
8
What is this sword?
25
Venezuelan crisis of 1902–03: Why is there a Russian flag on the cover of the prominent newspaper 'Le Petit Parisien'?
12
Why is the border between Myanmar and Thailand so long?
8
When did Russia learn about the Philippines and the Japanese and Spanish presences there?
2
Why did Indonesia use a separate currency for West Irian before 1973?
19
Did Greek traders visit the Philippines in the 1st century AD?