What were the ethnic backgrounds of the slaves in Ancient Greece?

When studying Ancient Greek history, one can often come across the historical fact that slavery did exist in the Greek world 2000 plus years ago. There were the Helots in Ancient Sparta and of course the Athenians had their own version of slavery. I was under the impression that slaves in Ancient Greece were typically of Greek ethnic origin, that is to say, Greek aristocrats owning Greek slaves (perhaps from the same city-state or another Greek city-state).

However, I also remember hearing about other ethnic groups who may have been slaves in the Ancient Greek world, such as the Thracians, Illyrians, Dacians (the Ancient Balkan peoples) as well as the Celts (it should be noted that the Celts also migrated into the Balkan region, as well as Anatolia/present-day Central Turkey).

For most of the classical period, non-Greek slaves came primarily from Thrace and Anatolia. There is also evidence of slaves from Syria, Illyria, Macedon and Ethiopia. Slaves of Greek origin were a minority as enslaving fellow Greeks was a sensitive issue.

As per the Cambridge World History of Slavery: vol 1,

While statistics are elusive, no one would seriously challenge the fact that there were large numbers of slaves in the Greek world of various kinds and origins....The slave trade was everywhere. At the periphery of Greek culture, slaves were traded all around the Black Sea, in the Adriatic and in the Eastern Mediterranean and North Africa. So too at its traditional centres – in Athens, Aegina, Corinth, Chios and elsewhere.

Slaves were bought and sold like any other commodity, and Greek slave traders were active along the coast of the Black Sea, among other areas.

The overwhelming impression created by the ancient literary sources is also that the main supply areas were the regions around the Black Sea (Velkov 1964; Finley 1981, 168–73).

Robin Osborne, in Classical Greece 500 - 323 BC, states that it was Thracians, Anatolians (from Caria, Cappadocia, Phrygia, Lydia etc) and Syrians who were most numerous. In part, this has been deduced from names:

...slaves often bore names which indicated ethnic origins. These names point to two principal areas of recruitment, the Phrygian, Lydian and Carian hinterlands behind the Greek cities on the western coast of Asia Minor on the one hand, and the regions to the north of the Aegean, principally Thrace, on the other.

There were also slaves from Scythia, Ilyria (Balkans), Macedon and even (possibly) Iran. For Thrace,

Herodotus (5.6) particularly noted the Thracians’ willingness to sell even their own children into slavery, and Xenophon (Anabasis 7) refers several times in his account his adventures in Thrace in 399 to the activities of slave traders from Byzantium.

Evidence of Ethiopian slaves can be found in the stele shown below from Attica. 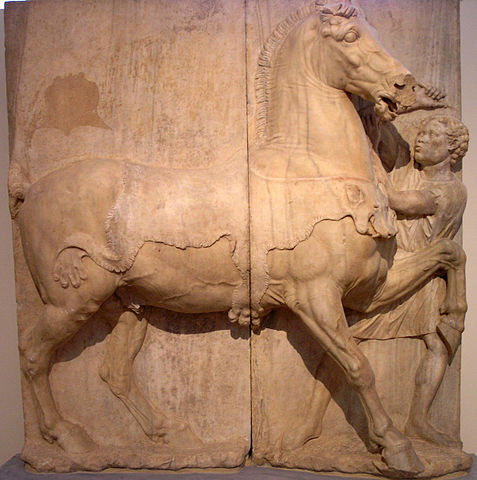 "A young Ethiopian groom slave tries to calm a horse down. He holds a whip in his raised right hand and the reins in his left one. Funerary stele from Attica, right side of a two-panels relief. Pentelic marble, found near the Larisis railway station, date unknown (maybe 4th century BC or 1st century BC)." Text & image source. Attrib: [GFDL (http://www.gnu.org/copyleft/fdl.html), CC-BY-SA-3.0 (http://creativecommons.org/ licenses/by-sa/3.0/) or CC BY 2.5 (https://creativecommons.org/licenses/by/2.5)], via Wikimedia Commons

The presence of Celtic slaves in Greece (through trade) is at least plausible as a Greek colony was founded at Massalia (modern day Marseille).

Enslavement of fellow Greeks could be a sensitive issue but certainly happened, and it was not just Sparta that did this (and there is some dispute as to whether Helots should be classified as slaves). War was a common source of slaves but

within Greek culture the treatment of the defeated was a major ethical issue in its own right. While there is scant sign of deep concern about the fate of defeated ‘barbarians’, the victor had more difficult decisions to make about defeated Greeks. Enslavement was a real option and was carried out, but the victor paid a price for that in the shaping of his reputation, which might well be taken to outweigh any financial gain, vengeful satisfaction or warning to others

When cities fell, there was a recurrent tendency for the victor (even when dealing with Greeks) to kill the men and enslave the women and children.

One of the most famous examples is the Athenians enslaving the defeated Melians (women and children - the men were killed) in 416 BC. This led to a lot of negative publicity on Athenian imperialism, hence

presumably helot women, had a high reputation outside Sparta, so high that Alcibiades of Athens, for example, was reared by such a Spartan helot nurse.

At the end of Peloponnesian war, some of Sparta's allies wanted the defeated Athenians to be enslaved but Sparta resisted this, arguing that Athens' contribution to the defeat of Persia some 100 years earlier should not be forgotten. Also, the Spartans probably felt that Athens was needed to counter the growing influence of Thebes.

A FEW OTHER POINTS OF INTEREST

23
What prevented slaves in Classical Greece from running off?