How did Tenochtitlan's Templo Mayor disappear for centuries?

According to Wikipedia (amongst other sources), after the Siege of Tenochtitlan, the Templo Mayor was dismantled and a church was built over its ruins. This church would eventually become Mexico City Cathedral.

However, the Templo Mayor was there all the time, with its main building just 25-30 meters away from the Cathedral side.... only that its top was (is) 2 or 3 meters below ground. This is easily verifiable by anyone going to visit the Templo Mayor ruins, so no argument about it (other than Wikipedia's article being wrong about it being dismantled and the church being built exactly over the temple).

I always wondered about this. I know Tenochtitlan was built using the chinampas system and that Lake Texcoco doesn't exist anymore, causing the terrain to be very unstable even to this day. As an example, here's a picture of the Palacio de Bellas Artes and a very good explanation on why Mexico City is sinking into the ground (sorry, it's in Spanish) and why the Cathedral itself has sunk 12 meters to date. 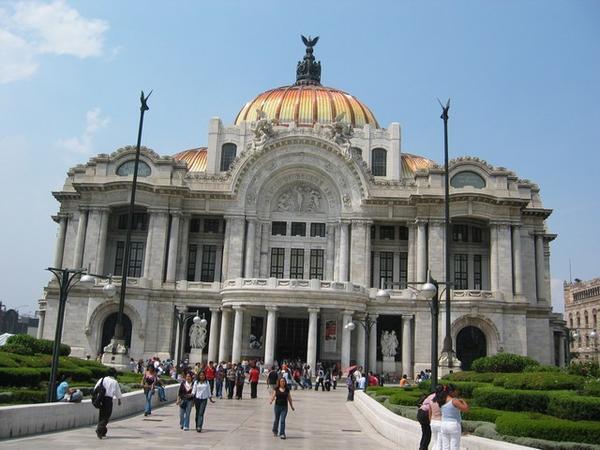 To add more data to this: Templo Mayor was 60 meters high at the time of Hernan Cortes, which is around the same size as the Cathedral's towers. Yet the Templo Mayor sank at least 65 meters in less than 50 years, while the Cathedral sank 12 meters in 5 centuries.

Finally, the Codex of Tlatelolco is a depiction of a ceremony including the King of Spain. The ceremony took place at the Zocalo, which is just in front of Templo Mayor, even to these days.

This pictorial codex was produced around 1560, showing royal ceremonies involving Spanish monarchs Charles V and his son and successor Philip II. The pictorials show the ‘’jura’’ (oath) ceremony of swearing the oath of allegiance to the new Spanish monarch, Philip II following the abdication of his father in 1556, performed in the Plaza Mayor of Zócalo in 1557. There are depictions of Charles V and Philip II, as well as the indigenous rulers of Tlatelolco and Tenochtitlan, (former altepetl and now parts of the Spanish capital of Mexico City), who along with all officials took the oath of allegiance. There is a written account in Spanish that differs from that depicted in the pictorial. The pictorial account omits the presence of the Spanish cabildo members.

This ceremony was only a few years after Tenochtitlan's Siege, so it's very unlikely that nobody noticed a huge pyramid with pagan statues and symbols within a few meters distance

On to my question:

If the Templo Mayor sank... why didn't all the surrounding Hispanic buildings sink at the same rate? And how did it disappear, both physically as well as from Mexico's inhabitants' memory until it was re-discovered in 1978? How can this be explained? Is it possible that rather than disappearing, indigenous people were forced to "not to see" the building? If so, is there any documentation on this? Alternatively, is it possible that the Templo Mayor's construction (made of rocks and built and re-built 7 times, layer over layer) caused it to sink at a really high rate?

Browse other questions tagged mexico building aztec or ask your own question.

8
What is the archaeological evidence for the Aztecs' use of entheogens?
17
How did Aztec armor and weaponry match up to the Spaniards?
4
Did any relevant Mexican authority ever acknowledge the secession of Texas before the start of the Mexican-American War?
6
How did Porfirio Diaz leave Mexico for Europe?
8
How long did it take to build earth dikes with low-tech tools?
6
What resources did the Nahua value most at the time of Spanish conquest?
2
How did Spain justify building a major port at San Blas, Nayarit?
14
Who decided on the name "Mexico"?
2
How was the first carpenter's square made?
37
Did Aztecs know how many continents there are on earth?