Was it not clear to the WWI allies that they were over-reaching with the treaty of Sevres?

In the treaty of Sevres, the Ottoman Empire was made to cede not only all (?) territories outside modern-day Turkey, but also:

and there's the oil, and a bunch of islands and maybe other stuff. 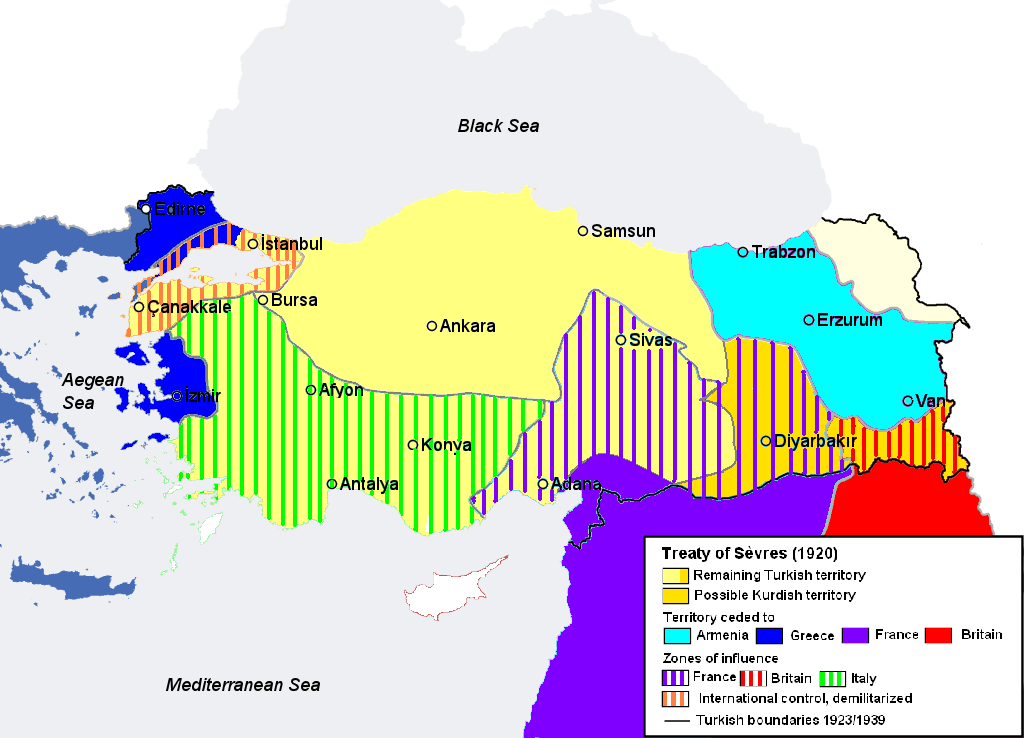 Now, even back then - there must have been, what, 20-25 million Turks or so? With a very active national movement, large army over a huge territory, and no strict foreign occupation to keep all that in check? Isn't it obvious that that treaty was made to be broken at the first opportunity?

You are correct, the Turkish National Movement heavily resisted treaty of Sevres which culminated in the Turkish War of independence...the treaty didn't last long.

Isn't it obvious that that treaty was made to be broken at the first opportunity?

Yep. And potentially intentionally. Prior to the first world war, the British subscribed to a balance of power model of policy with the idea that a united (or conquered) Europe under one banner would be an existential threat to Britain and therefore it was in Britains best interest to maintain the balance of power between opposing forces on mainland Europe. The Ottoman empire was a beneficiary of this policy as a weak Ottoman empire could be overrun by the Russians who would be in turn strong enough to cut into the Austrians and the rest of Europe. The policy actually saw the UK declare war on Russia.

The treaty of Sevres was formulated in that mindset...divide the territory and power up and ensure a single entity didn't have all the power. I think the power of the Turkish nationalist movement was either ignored or badly under estimated...as long as one European nation didn't 'own' the former body of the now defunct Ottoman empire, I don't think the drafters of the Treaty of Sevres cared what their lines did beyond that...if the Ottoman lands were to be conquered, the aggressor would now need to declare war on the allies in their entirety.

Just to add a bit more: The treaty conditions here were far more punishing than the treaty of Versailles and was entirely done to setup a 'puppet' nation where the allies (mainly France and Britain, but Italy as well) would control the territories finances, trade, and resources. The Treaty of Sevres was as much as anything, an attempt to divide the spoils of war (the former ottoman empire) to the allies (keeping in mind that this included Iraqi oil for the British).

It wasn't so much that the WW I Allies were "overreaching with The Treaty of Sevres"; rather, it was the fact that the WW I Allies had underestimated the rising wave of Kemalism and a new Turkish Republic movement which still retained the ferocity, ruthlessness and steadfast determination of the centuries old Ottoman Empire.

From the Greek perspective, The Treaty of Sevres, was initially, a victory for Greece. Beginning in 1919, Greece had regained-(though to a limited extent), the ancient region of Ionia in Western Turkey/Aegean Turkey, including, the centuries old city of Izmir/(Smyrna). It had been over 500 years since the Greeks had territorial control over this historic region and by 1919, the return of Ionia and Smyrna to Greece was, in a way, a near completion of the 100 year Hellenic struggle over Ottoman colonial rule. However, the return of Ionia and Smyrna to Greece only lasted 3 years and it culminated in a disastrously fiery end for the Greeks. This devastating event was titled, "The Smyrna Catastrophe" whereby the Greek citizens of Smyrna fled for their lives, due to the rising onslaught of rabidly anti-Greek Turkish Nationalists led by.......Mustafa Kemal "Ataturk". By September, 1922, the city of Smyrna, was "ethnically cleansed" and the city's entire Greek population fled the city's fiery destruction- (sparked by Turkish Nationalists).

From the British and French perspectives-(regarding Greek Ionia/Aegean Turkey), they lost a key geopolitical Greek ally. With the loss of Greek Ionia to the Turkish Nationalists, the Eurasian Aegean region, was now officially divided between an enfeebled Greece and a powerful Post-colonial Turkish Republic. In other words, the British/French interest in weakening and punishing the Turks for co-starting the First World war, actually emboldened and strengthened the Turkish Nationalist cause, resulting in, the present-day geography of the Turkish nation-state.

The WW I Allies naively and erroneously believed that the Turkish Nationalists would be satisfied with a state that was confined to much of Central Anatolia. They absolutely underestimated the ability of the Turks-(despite the birth of the Young Turks movement a generation earlier) to transform their cultural and political identity into a Post-Ottoman Westernized Republic.

So again, it wasn't necessarily an overreach on the part of the WW I Allies, but more of an underestimation of the Kemalists and the Turkish Nationalists vis-a-vis, The Treaty of Sevres.

This treaty has clearly underestimated, as stated in user26763's answer, the power of the nationalism movement of Turkey. However, this tretay is perfectly in the mindset of the other treaties made at the same time, which dismantled as well the Austrian Empire and the Russian Empire, and with the mindset of the Allies which was: "Divide in order to reign".

You consider Turkey with today's border, but back in 1918 you should remember that the Ottoman Empire was larger with multiple minorities, and as far as I know there were no distinctions between today's borders of Turkey and the rest of the Ottoman empire. Thus, when the Allies tore Medinah, Jerusalem and Irak off the Ottoman Empire, why should'nt they separate as well the West of Anatolia, full of Greek population, or the East, where Armenians suffered an extermination (genocide with today's words)?

When the nationalist movement, under Mustapha Kemal, started fighting back, it has no clear revendication. The geography made it stopped at the West coast, on territory with important Greek population, and not political revendications (which could have gone even further into Europe). They solved the problem of minorities with heavy population displacement (and the reciprocate made by Greece with Turkish minority), a brand new solution which reveals itself to be more stable than the breakdown of former borders made by the treaties.

The reason it may not have been obvious to them that they overreached at Sevres is that they spent much of the war imagining how they would change the map of the Near East with tsarist Russia as one of the victorious powers. When Russia got knocked out, the other allies somewhat understandably but very mistakenly thought they could grab for themselves what Russia would have taken or make changes that really would have depended on Russian force projection. Let's just say that the world was not blessed in 1917-1922 with the flexible and perspicacious diplomatic thinkers that saw it through 1814-1820.

Not the answer you're looking for? Browse other questions tagged world-war-one international-relations ottoman-empire turkey treaties or ask your own question.

10
What do "zones of influence" mean, according to the Treaty of Sevres after WWI?
6
Was the Bosnian Crisis the trigger to WWI and not the assassination?
34
Why was the Treaty of Versailles so harsh?
6
Is it true that Serbia was offered "Great Serbia" instead of Yugoslavia at the end of the WWI by Allies?
3
When did the German people learn that they had a large, powerful military, in violation of the Versailles Treaty?
8
What are the current obligations of Treaty of Lausanne?
23
The WWI Christmas truce of 1914 resulted in no consequences, in spite of clear warnings against such beforehand - why were there no courts-martial?
46
Was there ever a treaty between 2 entities with significantly different translations to the detriment of one party?
1
Which 4 states were not present to ratify the treaty of Paris on January 14th, 1784?