If the prices for cotton increased during the Industrial Revolution, how would the increase affect the market for farm land? [closed]

This is more an economics question than a history one. The supply curve represents the relationship between supply and price, not the absolute value of supply.

If more people sell their land because of the increased price, it doesn't mean that the relationship change. But if more people want to sell their land with the same price (e.g. when people become afraid that price will crash in the future), then you can say that the supply curve "shifts to the right".

Illustration: see the curve below. There is more supply at B than A, but B and A are within the same curve. 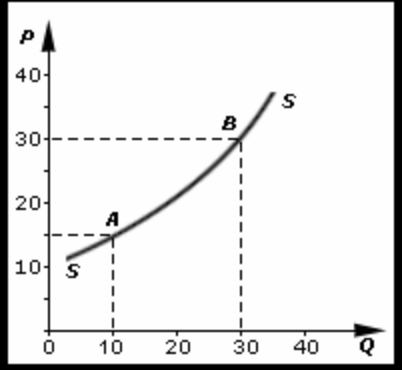 Yes cotton demand did make some farmland more valuable, but not all farmland.

The price of cotton did increase during the industrial revolution. Demand dramatically increased and this fueled the dramatic increase in cotton as a cash crop. It wasn't just farm land which would be necessary to supply the ever increasing demands of the automated looms of the early industrial revolution. It was farmlands with proximity to ports and roads so the cotton could be transported. This meant that centralized production had a huge advantages over smaller farmers. It was the large farms which mass produced farm goods which filled most of the demand for cotton. Those institutions which massed produced farm goods at the dawn of the industrial revolution were known as Plantations.

Yes cotton demand did make some farmland more valuable, but not all farmland. Just the large aristocratic farmers who were in a position to export cotton on the large scale that was required to meet demand.

9
What was the reason for inflation in Britain after the Black Death?
11
Are there instances where collective farming has actually brought benefit to the population
4
What was the reason for US Fed rate increase in spring 1928?
8
Where did the demand for textiles during the industrial revolution come from?
6
Index of importance / economic value various minerals during the Industrial Revolution
8
What was the effect of the Civil War on the cost of cotton?
3
Who was the first to point out that transmutation of gold would be mostly useless, since it would simply lead to inflation?
2
What percentage of the German population worked on gathering the harvest in 1917?