I'm watching the channel The Great War on YouTube, which documents the goings on of the First World War week by week (careful, it's addictive and there are literally hundreds of episodes).

It is my understanding that the British Grand Fleet was, in size and strength, pretty much unchallenged during most/all of the First World War (and beyond). While the German Imperial Navy did a bunch of damage to the Allies/Brits, it was mostly stealthy hit-and-run tactics employing u-boats and alike against (mostly) unarmed trading ships and transports.

So my question is:

Couldn't the British Grand Fleet force an engagement with the Imperial German Navy to bring to bear their greater number of ships in a decisive battle?

Why didn't the Grand Fleet for example attack German North Sea ports and/or cities from sea? I'm sure that would have forced the Imperial Navy to intervene, leading to the big battle the Grand Fleet was longing for all along...

Sea control is good. Sea denial is not that much worse.

Sinking an enemy ship at the cost of significant damage to your own is less desirable than keeping your enemy holed up in port (where his ships do little to no harm and your own ships stay undamaged).

As basically all naval strategy questions, this one puts too much emphasis on "defeating the enemy" and too little on the effects of a fleet in being.

Have a look at this map of the aforementioned Battle of Jutland (by Wikipedia user Grandiose, used under CC BY-SA 3.0 license): 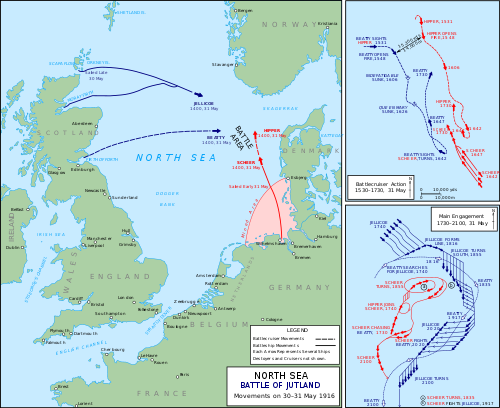 Do you see the red area, stretching from Esbjerg in Denmark to west of the Dollart? That's labelled "mined area". Which means even getting to the aforementioned channel leading to Wilhelmshaven would be no walk in the park...

I thought it would be fitting to add the following two lines from "Heart of Oak", the official march of the Royal Navy:

If they run, we will follow, we will drive them ashore,

And if they won't fight, we can do no more.

Because if they did, they would have been playing into German hands.

The Germans did not plan to match the British navy. What they did was create a Risk Fleet about 60% of the British fleet, one that could defeat the British fleet under ideal conditions (e.g. operating in home waters where the Germans would enjoy the benefit of mines, shore batteries, etc.). This would supposedly be sufficient to neutralize the British fleet, assuming that no British Lord High Admiral would risk such a battle of destruction.

The British Admiral (Jellicoe) was placed in a position where "he was the one man on either side who could lose the war in an afternoon." Destroying the German fleet might not win the war, but losing the British fleet would allow a cross-channel invasion or other results favoring the Germans, such as surface ship help for the submarine warfare.

The British fleet did not need to destroy the German fleet to obtain its (naval) objectives. It maintained a blockade that helped bring Germany to her knees. They weren't about to risk a "blockade for sure" in favor of a "maybe" of destroying the German navy.

First off: The British navy was the primary way for Britain to project their power on their colonies and the world. Being an island, Britain's mere existence was also based on a strong navy (e.g. for communication, supplies, and so on).

Risking the Grand Fleet would have had a negative impact on the power and strategical possibilities of British Empire.

But why was an attack like on Mers-el-Kébir not possible?

Because the British had much more to lose than to win by provoking such an engagement.

Churchill described Admiral Jellicoe, who commanded the fleet until promoted in November 1916, as "the only man on either side who could lose the war in an afternoon."

Not the answer you're looking for? Browse other questions tagged world-war-one warfare british-empire naval imperial-germany or ask your own question.

22
What effect did the Attack on Mers-el-Kébir have on Great Britain's international relations during WW2?
10
Why did Britain object to the Ottomans bringing its ships-of-the-line against Russia in the beginning of the Crimean War?
25
How did the British Navy pass orders to its fleet before radio?
14
Has the U.S. Navy ever commissioned the building of a warship overseas?
9
Was the Battle of Trafalgar strategically pointless?
11
What was the actual cause of the disaster for the Royal Navy’s battlecruisers in the Battle of Jutland?
34
Why were British ships not of the same quality as French and Spanish ships until the latter part of the 18th century?
25
What made the Russian Navy suspect Japanese torpedo boats were in North Sea in 1904?
3
Besides the US in 1958, has there been a post-WWII show of force by any military in the Taiwan Strait (excluding Taiwan and China)?
23
What was the "Favorable result" that the German admiralty was expecting from the naval attack on the Royal Navy in 1918?