In 1705, Caroline of Ansbach married Georges Augustus. In 1714, she moved to London with her husband as he becomes Prince of Wales. She, thus, becomes Princess of Wales. Her husband became king Georges II in 1727 and she became queen.

In 1736, princess Augusta of Saxe-Gotha married Frederick, Prince of Wales and became Princess of Wales.

Does it mean there was no Princess of Wales between 1727 and 1736? Or did Caroline keep the title until there was a new princess? Or goes the title to some brother's wife?

Simply, there would have been no Princess of Wales.

Caroline of Ansbach ceased to be the Princess of Wales on 11th June 1727 when she became Queen Consort when her husband became king.

When George II became King, his eldest son, Frederick Louis became the Prince of Wales as the title is traditionally granted to the heir apparent to the British Monarch.

The title of Princess of Wales was then not held until 8th April 1795 when Caroline of Brunswick married George, Prince of Wales who would later become King George IV.

The Princess of Wales is a courtesy title. That is, its holders are not created princesses in their own right, but rather accorded that honour only by virtue of marriage to the Prince of Wales. Accordingly, in the absence of such a prince (or when one is unmarried), there could be no Princess of Wales.

Under British law, any title to be held by the sovereign terminates. Therefore, when George Augustus ascended the throne in 1721, the title Prince of Wales was merged into the Crown and extinguished. By extension, Caroline also ceased to be Princess of Wales. The next heir apparent would have to be specifically created Prince of Wales again, by new letters patent issued by the new monarch.

To further illustrate, consider the case of Princess Augusta of Saxe-Gotha. As you noted, she became the next Princess of Wales upon marrying Prince Frederick in 1736. Prince Frederick, however, predeceased his father King George II without ever managing to ascended to the throne. The widowed Augusta was then styled Princess Dowager of Wales. 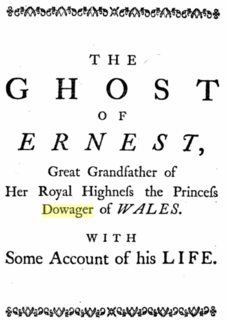 1757 book about Ernest the Pious, Duke of Saxe-Gotha and Augusta's great grandfather.

To clarify the dates a little bit:

Frederick died 31 March 1751 and Princess Augusta was thereafter merely dowager Princess of Wales and not real princess of wales.

Frederick's son George was created Prince of Wales 20 April 1751. He became King George III 25 October 1760 and did not marry until 8 September 1761 and thus never had a Princess of Wales.

Not the answer you're looking for? Browse other questions tagged england united-kingdom royalty titles or ask your own question.

11
Was Princess Elizabeth a van/ambulance driver/mechanic during WW2?
24
Has there ever been a true kidnapped princess from anywhere in the world?
6
Is there a difference between “post-medieval” and “modern”?
7
What 17C protocol left a princess standing whilst commoners sat?
14
Why is the heir to the British throne called “Prince of Wales”?
3
Did Catherine of Aragon use the title Princess of Wales before she was married to Prince Arthur?
23
Was the title “Prince of Wales” originally claimed for the English crown prince via a trick?