Is there evidence to suggest that the strike of the Matchwomen in 1888 gave rise to the modern union movement? 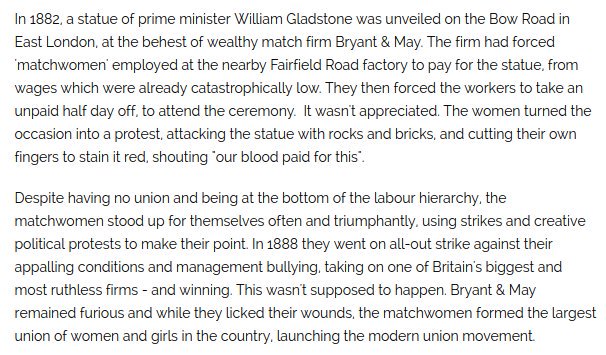 I had thought that the union movement had more to do with the strikes of Ned Ludd.

My question is: Is there evidence to suggest that the strike of the Matchwomen in 1888 gave rise to the modern union movement?

While the Bryant and May strike was certainly an important milestone in the development of trade unions, the rise of the modern trades union movement had begun in the 1820s, and unions had been fully recognised in law for more than a decade before the 1888 strike.

The Rise of Trade Unionism

The earliest attempts to unionise workers were in the 18th century. These had given rise to the Combination Acts of 1799 and 1800. Those acts remained in force until the 1920s, and effectively made Trade Unions (or "combinations" of workers) illegal until they were repealed in 1924.

A new act, the Combinations of Workmen Act 1825, was passed by the UK Parliament the following year. This made Trade Unions technically legal, but placed severe restrictions on their activities. Possibly the best known example of just how harsh the law could be at that time is the story of the Tolpuddle Martyrs.

Despite the restrictions imposed by the 1825 act, the 1820s and 1830s was a period of significant growth for the Trade Union movement. The National Association for the Protection of Labour was an association of Trade Unions formed in 1830, and might be thought of as a precursor of the Trades Union Congress, which was founded in 1868.

Many of the early unions had developed in the new, factory-based, textile industries which were such a prominent feature of the industrial revolution. People often forget how many women took prominent roles in establishing these these unions.

In 1867, the UK government established a Royal Commission on Trade Unions. This reported that trade unions were felt to be beneficial to both workers and to employers. As a result, the government passed the Trade Union Act 1871 which fully legalised trades unions in the United Kingdom (more than a decade before the Bryant and May match-girl strike of 1888).

The story of the Bryant and May match-girl strike is, however, one of the best-known well-known examples of the expansion of the membership and roles of the trade unions, which have become known today as "New Unionism".

One might reasonably argue that the Matchgirls' Union was one of the early "modern unions" that had begun to be established to cater for unskilled, and semi-skilled casual workers during the 1880s. Although they were by no means the first of these "modern unions", they certainly seem to have been the first large union for unskilled and semi-skilled casual female workers, and in that regard their role in the developing trade union movement should not be understated.

is, perhaps, a step too far.

It's worth noting that the article you mentioned is from a politics site, rather than a history site, although the author is herself an historian.

The UK National Archives has some interesting and useful resources which might help give a more complete picture of the development of the Trades Union Movement.

The Luddite movements of the early nineteenth century took place at a time when trade unions were effectively illegal. After they gained some limited legal protections in the 1820s, unions grew in size and strength, but by the late nineteenth century they were dominated by skilled workers and much less common among unskilled or semi-skilled labour - the groups probably most in need of union protection.

The match-girls strike was an early part of the "new unionism" movement of the late 1880s, which organised unskilled and semi-skilled workers into unions. That movement led to the modern trade unions, which work on a national scale, across whole industries or sectors, and recruit from the whole workforce in that area rather than just small craft groups.

Not the answer you're looking for? Browse other questions tagged social-history or ask your own question.

13
What are the historical reasons for religious and political negative attitudes towards homosexuality?
9
What was the social status of a man who failed the civil service exams in Imperial China ( 1200 - 1800 AD )?
11
When has serious unemployment among educated young populations not led to revolution or war?
8
What is the meaning of “£10 per cent” in the early 19th century in relation to a wage (30/- fortnight)
9
What is the most advanced nonliterate society?
54
Why was the Scout movement so successful?