When Israel won the Six Day War, did they consider expelling all Arabs from the annexed territories?

There is no evidence they seriously considered expelling all Palestinians. The impracticality, illegality and negative publicity was self-evident, even if fringe elements entertained the fantasy. However, there's evidence that smaller scale displacements were carried out. It resulted in the 1967 exodus.

During the brief war of 1967, 350,000 Palestinians were displaced, representing one-quarter of the population of the two sectors. Israel denied causing this exodus, but according to a U.S. State Department account, Israeli aircraft "hit many civilian targets on the West Bank where there are absolutely no military emplacements," causing thousands to flee.

Israel denies this, obviously. However, post-war surveys of Palestinian refugees in Jordan revealed that a majority reported air strikes as the reason they fled.

[I]n survey, 57% of West Bank Arabs who took refuge in Jordan during 1967 war cited aerial bombardment as reason for departing.

This is also corroborated in contemporary reports from Western journalists during the war.

There seems to be little doubt that the 60,000 inhabitants of the three big U.N. camps around Jericho were attacked by planes on the second day of the fighting. They are now the biggest single group among the refugees who have arrived.

Furthermore, while Israel accuses them of antisemitism, the 1971 report of the Special Committee to Investigate Israeli Practices Affecting the Human Rights of the Population of Occupied Territories states that:

On the basis of the testimony placed before it or obtained by it in the course of its investigations, the Special Committee had been led to conclude that the Government of Israel is deliberately carrying out policies aimed at . . . forcing those who are in their homes in the occupied territories to leave, either by direct means such as deportation or indirectly by attempts at undermining their morale or through the offer of special inducements, all with the ultimate object of annexing and settling the occupied territories. The Special Committee considers the acts of the Government of Israel in furtherance of these policies to be the most serious violation of human rights that has come to its attention. The evidence shows that this situation has deteriorated since the last mission of the Special Committee in 1970.

However, again, they did not consider expelling all of the Palestinians. For one thing, unlike 1948, there was no huge reserve of Jewish immigrants to settle all this land. For another, Israel believed that maintaining an Arabic population in the West Bank would form a "human bridge" to the other Arab nations.

One was the hope that the Arabs of the occupied West Bank, in particular, might provide a human bridge over which Israel could "normalise" relations with other Arab countries . . . The second reason why Israel did not expel Arabs form the territories occupied in 1967 was that, unlike 1948, there were no waves of Jewish immigrants waiting to take the Arabs' place.

Moreover, it would be impossible to hide the scale of such an expulsion, and that would have destroyed Israeli reputation worldwide. As has been pointed out, expelling civilian populations from occupied regions is an egregious, black-and-white violation of international law, including treaties Israel is party to. Specifically, the Fourth Geneva Convention Article 49:

Individual or mass forcible transfers, as well as deportations of protected persons from occupied territory to the territory of the Occupying Power or to that of any other country, occupied or not, are prohibited, regardless of their motive.

I'm not aware of any evidence that Israel considered mass expulsions from occupied territories in the aftermath of the 1967 Six Day War.

As I understand it, the civilian populations would have been protected under the terms of the Fourth Geneva Convention. In particular, Article 49 of the Convention states that:

"Individual or mass forcible transfers, as well as deportations of protected persons from occupied territory to the territory of the Occupying Power or to that of any other country, occupied or not, are prohibited, regardless of their motive."

Question: When Israel won the six day war did they consider expelling all Arabs from the annexed territory?

Short Answer:
Yes the expulsion of all Arabs from the occupied territories was considered at a cabinet meeting by the Israeli Prime Minister. Although Israel didn't expel all Arabs, they did conduct mass expulsions of some Arabs on the village scale to make room for Israeli settlements.

Overall, not just from forced expulsions, it is estimated that 300,000 Arabs of the occupied territories were displaced in the Six Day War. That was 30% of the pre-war Arab population of those territories.

The Six Day War: Captured territories and Arab displaced populations
There was extensive displacement of populations in the captured territories: of about one million Palestinians in the West Bank and Gaza, 300,000 (according to the United States Department of State) either fled, or were displaced from their homes, to Jordan, where they contributed to the growing unrest.

Yes the mass expulsion of civilians was a violation of international law at least according to the current President of the United Nations Mechanism for International Criminal Tribunals. (It takes 4 judges to make a UN Tribunal ruling and they have never convened nor heard such a case.)

Detailed Answer:
It was discussed at the highest levels of Israels government. From Israeli classified papers released May of 2017, we know it was mentioned and discussed at a cabinet meeting.

On June 15, 1967, five days after the end of the war, ministers of the security cabinet discussed various options for the newly occupied territories, with then foreign minister Abba Eban describing continued Israeli rule as a potential "powder keg".

"We are sitting here with two populations, one of them endowed with all the civil rights and the other denied all rights," he was quoted as saying in extracts published by Israeli daily Haaretz.

"The world will side with a liberation movement of that one and a half million" under occupation, he said.

The possibility of expelling them was mentioned, with Levy Eshkol, the Israeli prime minister at the time, saying that "if it were up to us, we would send all the Arabs to Brazil."

His justice minister, Yaakov Shimshon Shapira, objected."They are inhabitants of this land, and today you are ruling over it. There is no reason to take Arabs who were born here out of here and transfer them to Iraq," he said.

Eshkol was unconvinced."We didn't sneak in here. We said that the Land of Israel is ours by right," he wrote.

While forced removal of the entire Arab population was not pursued, mass removal at the village level was, along with the demolition of Arab homes.

Yes Israels mass expulsions were a violation of international law at least according to the current President of the United Nations Mechanism for International Criminal Tribunals Theodor Meron.

In 1967 Theodor Meron was a Legal advisor on International Law to the state of Israel. At that time he advised the Prime minister of Israel in a Top Secret Memo, that his planned deportation of Arabs in order to make room for an Israeli settlement was a violation of international law, specifically the fourth Geneva Conventions.

Theodor Meron
In the late 1960s, Meron was legal counsel to the Israeli Foreign Ministry and wrote a secret 1967 memo for Prime Minister Levi Eshkol, who was considering creating an Israeli settlement at Kfar Etziodn. This was just after Israel's victory in the Six-Day War of June 1967. Meron's Memo concluded that creating new settlements in the Occupied Territories would be a violation of the Fourth Geneva Convention. Israeli Prime Minister Eshkol created the settlements anyway.

In a recent(2017) AJIL article, Theodor Meron elaborated on the above-mentioned legal advice that he had provided to the Israeli government in 1967-68.

Here is the AJIL(The American Society of International Law) Article written by Meron in 2017, revisiting his 1967 legal advice given to the Prime Minister of Israel:

Both sources describes people leaving on their own free will as a result of a war, some of it supported by the Israeli government funds and assistance , but according to the articles nothing about active deportation.

There was a plan that was partially executed to support and encourage people who wanted to leave, for example by helping in getting visas to other countries, offering money grants to people willing to leave and by trying to get out of the way of those leaving to neighboring countries.

The following official Israel documents from the first link gives the big picture: 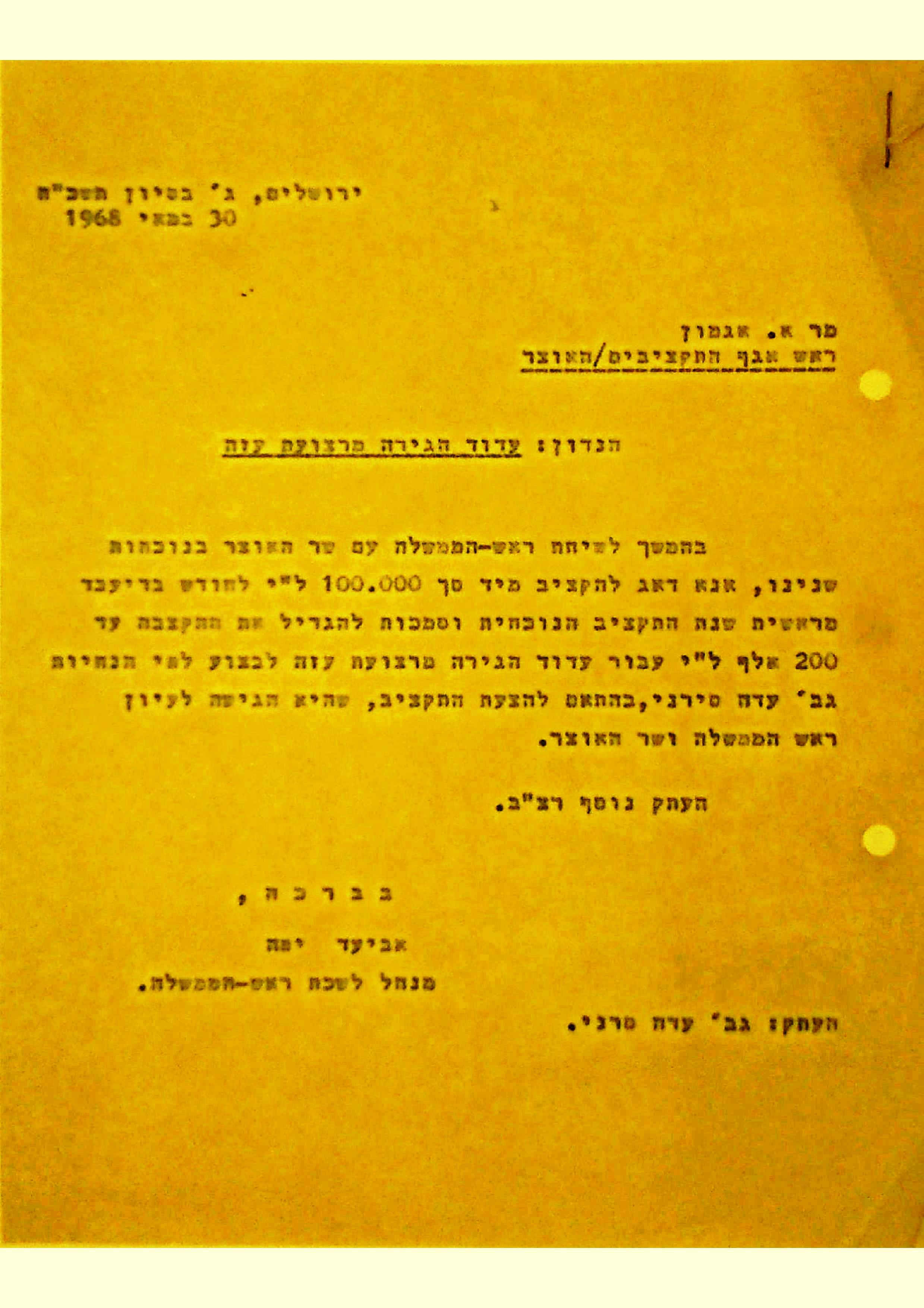 The document describes a budget assigned for encouraging immigration from the Gaza strip. 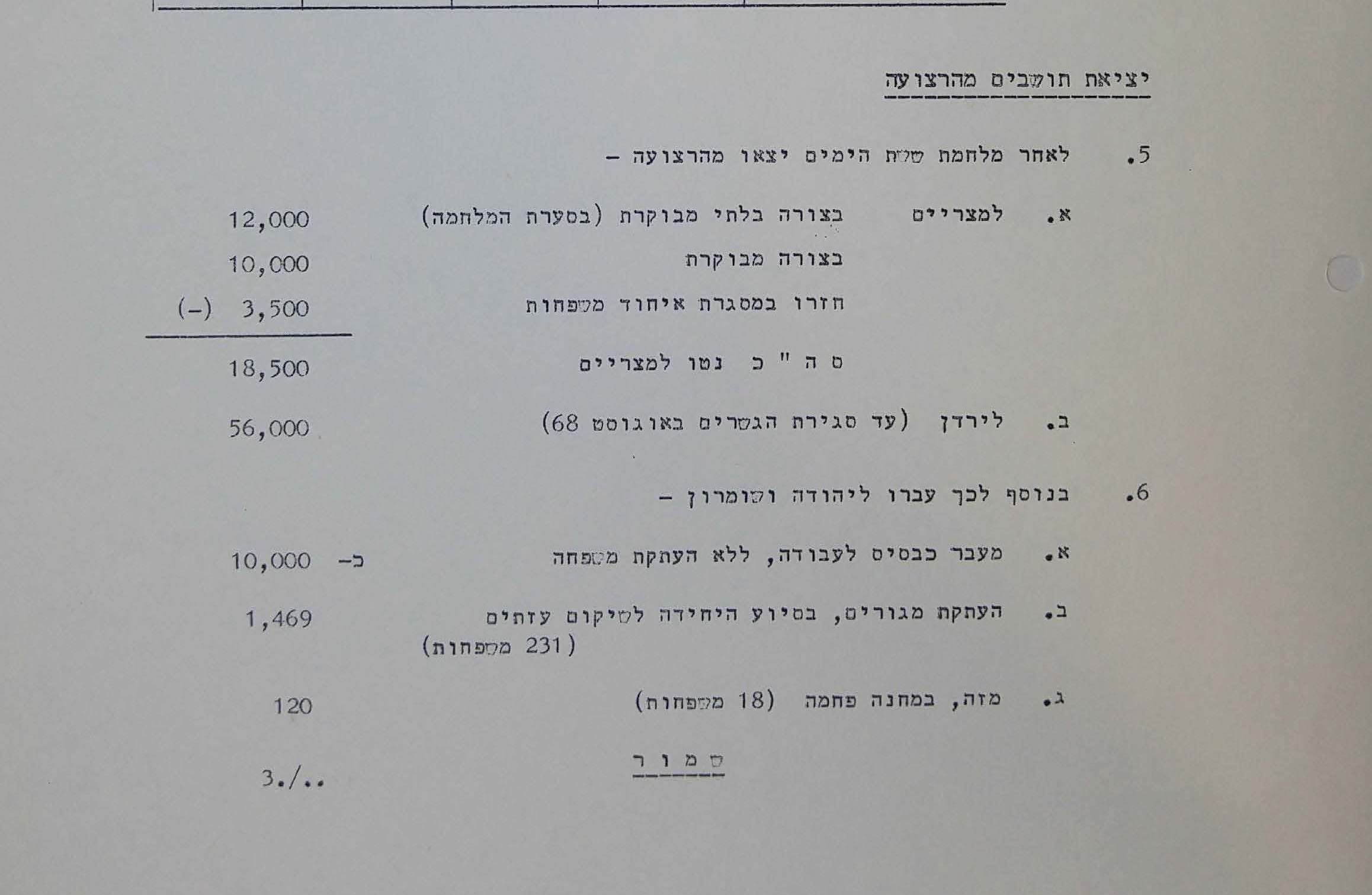 The document counts the number of people relocated during and after the war, none of them forcefully according to the articles above interpretation.

This is roughly translated as:

B. Relocation, with the help of the Gaza Rehabilitation Unit 1,469 (231 Families)

This is a bit of speculation on my part, but I have seen it mentioned in military history books.

What you have to realize is how narrow the original Israel, minus the Occupied Territories is. And that these wars were taking place in a post WW2, armored blitzkrieg doctrinal context. A determined push could cut Israel in two.

Supposedly, the intent with the original settlements was to create buffer urban zones, even as small as farms, that would allow determined defenders to hold up rapid incursions, at least for a time. WW2 history is full of similar cases. Armed settlers + some military, to buy time for Israeli military might and to compensate for extreme lack of strategic depth. If so, that might, for understandable reasons, not have been made entirely clear to prospective settlers and the public as a whole.

Over time, both through ideology and incentives, the settlements have grown. But, if my speculation is correct, the original intent did not require taking over the territories as a whole. Just some of the key points.

Here are some of the easily found villages from @JMS's list. Notice that they mostly sit near major East-West roads (granted, it'd be better to show what roads were there in 67, but that's another story). 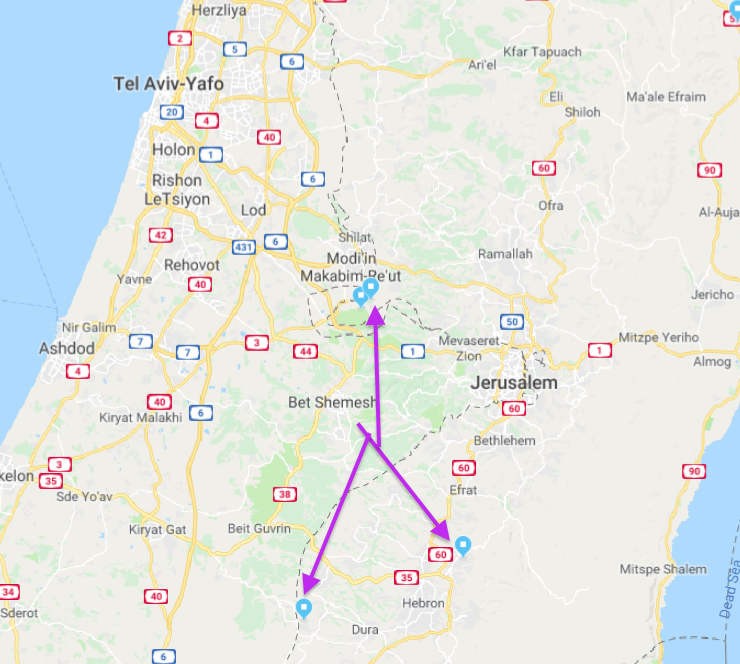 Not the answer you're looking for? Browse other questions tagged israel palestine 1960s or ask your own question.

3
Did international laws on wars of conquest change in 1945?

64
How did Israel win the Six-Day War?
29
Did Arab policymakers have plans for the Jewish population, in case of victory in 1948 War?
3
Why was Oslo I Accord so harsh or controversial?
2
Did the PLO coordinate with Arab armies during the Six Day War?
5
Is / was there ever any co-existence solution to peace with Israel that the Arab Palestinian side proposed or said would accept?
1
Why did the U.S. place an arms embargo on all belligerents in the 1948 Arab-Israeli war?
12
Were there any long-term political effects on Argentina after Eichmann's kidnapping?