Was Transylvania autonomous within Hungary before 1526?

Transylvania is presented in Romanian historiography in parallel with the other two "Principalities" with which it ended up united in the 20th century - Wallachia and Moldavia. These two had been under Hungarian suzerainty at some point, and the king of Hungary was instrumental in the creation of at least one of them during his fight against the Golden Horde (namely Moldavia).

Both of these two Romanian-speaking states later enjoyed a relative autonomy by balancing allegiances between Hungary, Poland and the Ottomans. Their integration within the European feudal order was problematic, given their non-Catholic Christianity, and their rulers were considered only as "princes", not as kings, although this may have derived more from their heterogeneity rather than their vassal status in relation to a king.

The autonomous principality of Transylvania is a later phenomenon, but when it happened, this statehood had a lot of the characteristics mentioned above with respect to the other two principalities: only relative autonomy (but some poignant action at times, such as taking part to the 30 Years' War in the Protestant camp), only principality and not kingdom, balance between foreign powers, and frequent switching of allegiances.

I suspect nationalist discourse and a projection of the present into the past play a great role in Romanian historiography as far as the similitude between Wallachian/Romanian (future Danubian) Principalities and the Principality of Transylvania is concerned. But at the same time I cannot help but wonder: Is there nothing more than that?

Hungary (along with Poland and other Eastern powers - see the link above) differs in its feudal order and kingship from the Carolingian area.

Transylvania was one of the lands of the Hungarian crown. It became separate after the partitioning of the kingdom as a result the defeat at Mohács by the Ottomans on 29 August 1526. The Turkish occupation of Hungary-proper created the conditions for autonomy, confirmed by the Treaty of Speyer (1570).

And so, the Principality of Transylvania existed as a semi-independent state, ruled primarily by Hungarian princes, between 1570 and 1711, when the princes of Transylvania were replaced with Habsburg governors. But were there any such princes before that? How did the King of Hungary administer this territory before the catastrophic defeat against the Turks? Was it a appanage of the king? Was it that of a prince, duke or other lord?

Was there any tradition of autonomy of Transylvania within the Kingdom of Hungary before 1525-1570?

When I first asked this question I was anticipating a quick answer, but it seems that is problematic.

I will try to answer it myself and then progressively improve the answer based on comments and such.

Transylvania had some autonomy within the Kingdom of Hungary before the partition of 1526–1541, which may have played a role in the creation of an autonomous polity after the partition.

There was the title of "Duke of Transylvania", which should qualify Transylvania as a duchy, but that was granted only four times, to either a son or a brother of the king of Hungary.

The normal rule was the Voivodeship of Transylvania, where the ruler was the vajda (from the slavic voivode, literally "war-leader"), who acted as high-ranking royal official with wide-ranging administrative, military and judicial powers. But he was just the representative of the king and appointed by him, like a governor, while the autonomy of some regions and towns within Transylvania were freedoms grated by the king that limited the power of the Voivode over them.

Transylvania was not as much an autonomous region of Hungary as a region with more different autonomous powers and freedoms than the rest of Hungary. First, there was the relative autonomy of Hungarian nobility in relation to the king. The king limited the autonomy of the seven Transylvanian counties by the power of his appointed voivode, who was one of the greater nobles of Hungary. But some regions (like the Székely) and (especially German) towns enjoyed greater freedom in relation to the nobles as well as the royal power. These three elements formed the Unio Trium Nationum, an alliance of the privileged classes against the peasants (no matter their nationality). And then there were the Romanian and other Christian Orthodox populations, mostly peasants, that had their (very local) religious autonomy - or rather "heterogeneity" - (albeit at the expense of any political rights). 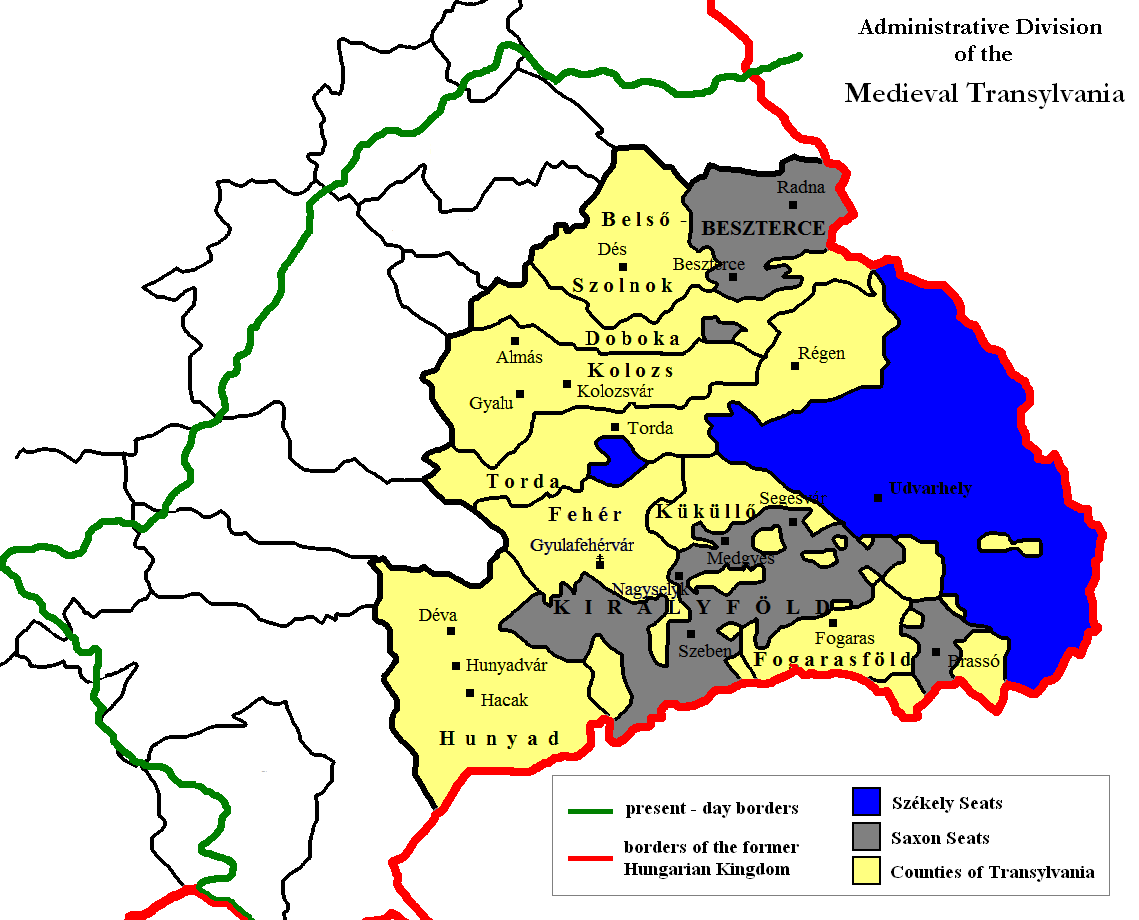 This above map roughly illustrates the situation - a more detailed one here. 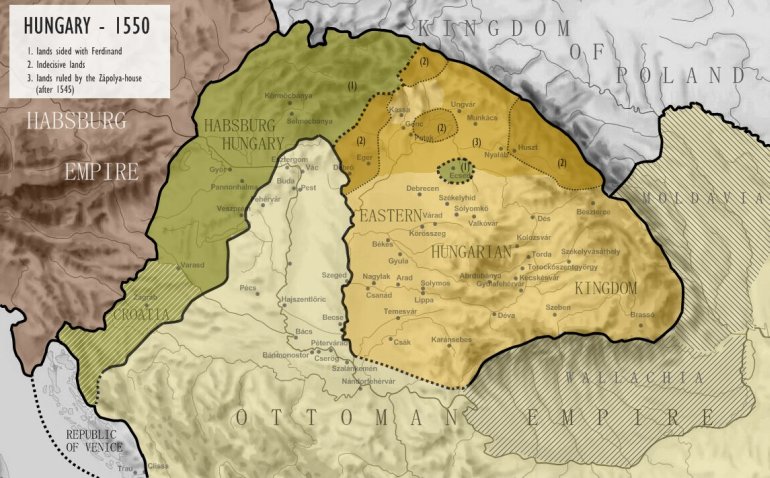 As stated in the Wikipedia article linked above: "Because of the gradual disintegration of the medieval Kingdom of Hungary in the 16th century, the last voivodes of Transylvania, who came from the Báthory family, ceased to be high-ranking officials. Instead they were the heads of state, although under Ottoman suzerainty, of a new principality emerging in the eastern territories of the kingdom. Accordingly, Stephen Báthory, the voivode elected by the Diet of the new realm, officially abandoned the title of voivode and adopted that of prince in 1576, upon his election as King of Poland."

But the semi-independent Principality of Transylvania should not be seen as the result of a separation from Hungary, as much as the result of an effort of Hungarian elites to safeguard some autonomy against the Ottoman but also Habsburg power.

John Zápolya, the last Voivode of Transylvania within the unified kingdom and the first independent ruler of Transylvania, acted in the latter case as a King of Hungary. His intension was to act as a conservator of the Hungarian crown, a title which was successfully disputed to him by Archduke Ferdinand of Austria, the late king's brother-in-law and brother of Holy Roman Emperor Charles V.

The separation of Transylvania from the rest of Hungary after the defeat against the Turks is partly the continuation of a previous autonomy, but much more the new result of the balance of power between Habsburg, Hungarians, Polish and Turks.

What aligned for a while the Principality of Transylvania with the two Romanian principalities of Wallachia and Moldavia were military and geopolitical reasons which determined them all in the same way and forced them to play a double or even triple game between Poland, the Ottomans and the Habsburg.

The Archduke Ferdinand anticipated that an independent Transylvania would be tempted to rally with the Turks in order to keep its autonomy, and this was confirmed by the future state of affairs. On the other hand, Trasylvanian rulers seemed to have considered the Habsburg rather than the Ottoman as the main menace, against which they used Polish as well as Ottoman influence, and even adopted Calvinism. They anticipated in a way the fact that a full victory of the Habsburg against the Turks would lead to the full integration of Hungarian lands into the Habsburg empire. This was confirmed by the fact that the collapse of Ottoman power in the region with the Treaty of Karlowitz in 1699 lead to Rákóczi's War of Independence (1703–11) and the end of the relatively independent principality.

4
Typology and the cause of difference between European medieval kingship?

10
Could any Habsburg kings of Hungary speak Hungarian?
2
Why is Hungary geographically important to travel between Europe and the Middle East?
9
In the “Immigrationist theory” of Romanians (Vlachs), how did they became the vast majority in Transylvania?
4
Typology and the cause of difference between European medieval kingship?
7
Was slavery abolished in the Kingdom of Hungary, and if so, when?
4
What was the real innovation of the coach-builders of Kocs in Hungary?
3
Oppression of non-ethnic Hungarians in Hungary pre 1800s
13
Why do some 17th and 18th century maps depict Ottoman sanjaks north of the Danube in Wallachia?