What happened at the Battle (or not?) of Luding Bridge, during the Long March of Chinese Communists in 1935?

I've just finished reading Mao: The Unknown Story by Chang and Halliday. She seems very biased against Mao and revels in accusing him of lying and manipulating. If this were to be taken as a serious historical study, rather than a biography, I'd say that her lack of objectivity is a serious failing.

One particular item she mentions was the Battle of Luding Bridge, supposedly happening in May 1935.

Wikipedia Red Army sources agree that the members of the force crawled over the bare iron chains of the bridge while under heavy Nationalist machine-gun fire from the opposite side.

This is the Wikepedia entry wiki/Battle_of_Luding_Bridge#The_battle_at_the_bridge and here's an image of the bridge. https://upload.wikimedia.org/wikipedia/commons/8/87/Luding_Bridge_June_07_350D_127.jpg

Some things that smell off to me:

Now, I don't have a problem with calling out Chang for being controversial. But revisionist is a term often used in Communist terminology, so it sticks out as a sore thumb regarding the objectivity of that particular paragraph criticizing Jung Chang.

Any idea of what actually happened on that day?

It's accurate to say it wasn't much of a battle.

The bridge was only lightly defended by two sections of the Sichuan clique's 24th Army, an extremely poor quality regional unit. There is no claim in Chinese sources that the defenders possessed machine guns, which would have been quite out of the ordinary for such subpar units. Their main defense preparation was to douse their end of the bridge in oil, and to remove the planks from the bridge. Evidently it was not completed before the Communists arrived.

For context, Luding Bridge was built in 1706 by order of the Kangxi Emperor, and consists of 13 iron chains spanning about 100m. Four of these acts as railings, while wooden planks covered the other nine to form the bridge. Had the planks been removed, it would've looked like this: 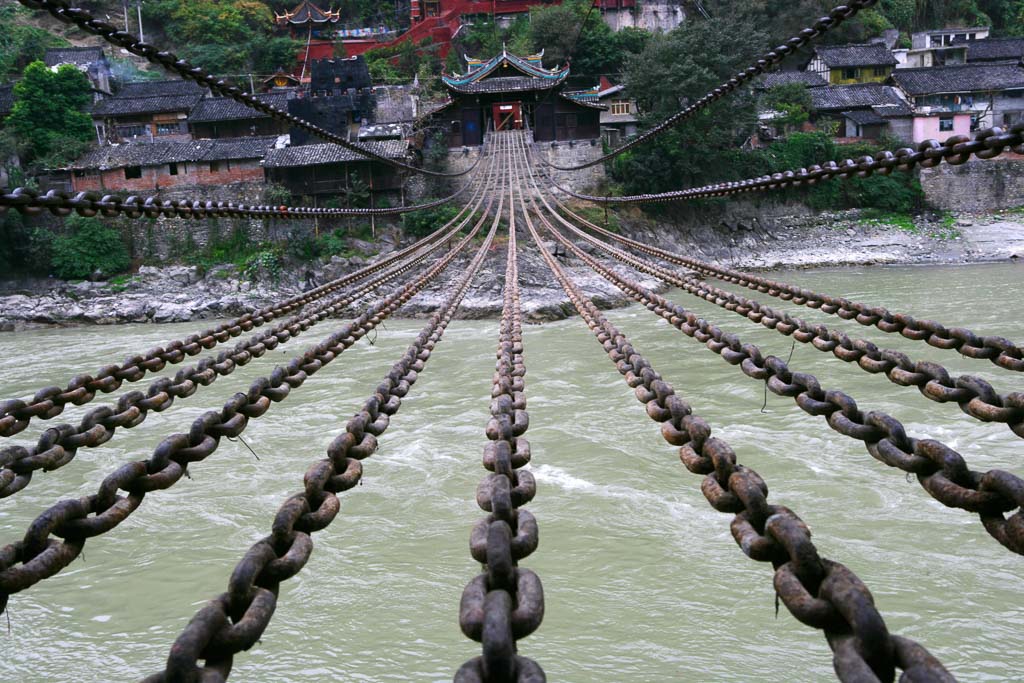 The initial Communist attack was conducted by only ~22 soldiers, though they were backed up with fire support from the rest of the Red 4th Regiment. According to their political commissar Yang Chengwu, all 22 survived. This would be extremely improbable if they had to climb across the bridge on steel chains head first into machine gunfire. Tellingly, this particular claim in the English Wikipedia is unsourced.

Therefore, on this incident at least, Chang and Halliday's account appears to be accurate. Another writer, Sun Shuyun, corroborates this portrayal of the "battle" in her The Long March: The True History of Communist China's Founding Myth. Sun reports that a local blacksmith told her the bridge was only defended by a squad. In his recollection, the defenders panicked and fled upon contact with the Communists without much fighting.

In fact, there's very good reason to doubt the official Chinese account of the "battle". None other than Deng Xiaoping, leader of China during the 1980s, reputedly told visiting American National Security Advisor, Zbigniew Brzezinski, that it was really just propaganda.

Chairman Dong smiled and said, “Well, that’s the way it’s presented in our propaganda. We needed that to express the fighting spirit of our forces. In fact, it was a very easy military operation. There wasn’t really much to it. The other side were just some troops of the warlord who were armed with old muskets and it really wasn’t that much of a feat, but we felt we had to dramatize it.”

The 2005 Oksenberg Lecture, delivered by Zbigniew Brzezinski at Stanford University

Taking such liberties with military facts would not have been anything unusual for the Chinese Communists of the time. It permeates their official account of the so-called 25,000 li Long March (i.e. ~12,500 km). Which was, in reality, a 9,000 km fighting retreat as they were pushed out of region after region by Nationalist forces.

Not the answer you're looking for? Browse other questions tagged china 1930s battle or ask your own question.

13
What happened to the S.A. (Sturmabteilung; "Stormtroopers") after The Night of the Long Knives?
4
What was Gen. Buford's ultimate objective at the Battle of Gettysburg?
6
What were conditions like for Chinese men subject to recruitment by the army during the Second Sino-Japanese War and Chinese Civil War?
13
Were there any Chinese expeditions to explore the world? If not, why not?
16
What is the small country between USSR and Mongolia in 1935?
6
Did Mao Zedong and Chinese communists collude with the Japanese during the Sino-Japanese War?
1
Why didn't the Chinese attack Hungnam during the evacuation?
5
What is the technical term for a head on head battle?