What was Income Disparity like in the Middle Ages of Europe?

My question was how much of an income gap there was in medieval Europe, to compare? Were the Kings and merchant guild leaders earning 600,000 times what the day labourer was earning, in the middle ages?

If you need the time narrowed down further, I was thinking from the years 1200 to 1400.

A quick look at the list of wealthy individuals from the middle ages, gives us William the Conqueror for someone most of us are familiar with. The wiki list is a bit vague on dollar amounts, so a little more research leads us to another article here which has this to say:

William the Conqueror was a King of England, and had an inflation-adjusted estimated net worth of $229.5 billion.

(google says that's £172.125 billion) Since comparing net worth is not a simple issue, the OP is asking for income figures. Digging a little deeper I was finally able to come up for some numbers on William, which show why he was considered one of the richest men in history.

From the Book Taxation, Revenue, Expenditure, Power, Statistics, and Debt of the Whole British Empire; Their Origin, Progress, and Present State: , published in 1833,there is a table which shows the revenue of William the Conqueror:

So £400,000. But this is just one source, so continuing to search, another book showed up discussing this:The History of the Public Revenue of the British Empire : Containing an Account of the Public Income and Expenditure from the Remotest Periods Recorded in History, to Michaelmas 1802; with a Review of the Financial Administration of the Right Honorable William Pitt. By Sir John Sinclair published 1803. On page 70 they get around to discussing the revenue collected by William: 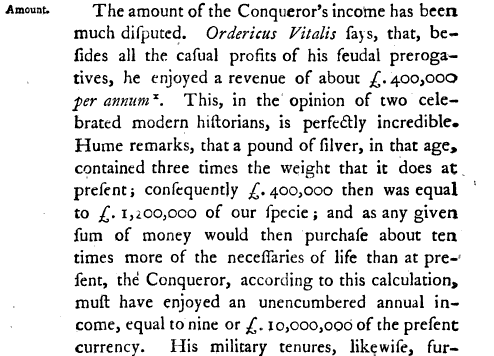 Another match of the £400,000 figure, with a source. Later in the book(pg 72) they discussed the reasons for trusting the figures presented by this source:

...it is impossible totally to discredit the accounts of Vitalis an historian who was born only nine years after the conquest and consequently must have enjoyed better access to information than any modern can pretend to

...Besides Vitalis is so particular in the sum he mentions stating not only the pounds but even the number of farthings which William received namely £1,060 30 s 1/2d a day ...that one would suppose his information was derived from authentic records and was not founded on vague or hasty computations.

The historian whose figures are mentioned is Orderic Vitalis, and the wiki page mentions, concerning him:

Modern historians view him as a reliable source.

So we have an estimate of roughly £400,000 for an income for William the Conqueror.

Another quick search for wages at that time gives us a site, The History of England which says:

(There is some other good info on the above site as well concerning things such as the value of bread and other wage figures.)

Getting rid of my old attempt at comparing apples and oranges, or trying to translate values to todays' dollars or pounds, we have two numbers £400,000 to £2. Therefor, if we take the 19th century figures at face value, we can conclude that:

Not quite the equivalent of Gates 33 million per day, but not inconsequential. It was definitely, as Mel Brooks would say,"Good to be King".

In their book, Henry II: New Interpretations, Christopher Harper-Bill and Nicholas Vincent discuss the annual income received by King Henry II of England, based on the earlier analysis by James Ramsey. There are a range of figures to choose from:

"Furthermore, given the historical preoccupation with 1180 as the date closely associated with the start of sustained price rises, the average annual income for the period from 1179/80 until the end of the reign was a few pounds shy of £22,000".

These are slightly earlier than the period you're considering, but should still give a reasonable approximation of the expected range. For convenience, I will take the quoted average figure for the whole reign of £18,000, but you can do the same calculations for other parts of the reign.

There were 12 pennies to a shilling, and 20 shillings to a pound. This gives 240 pennies to the pound.

At the other end of society, the figures are equally difficult to calculate, but the Medieval Prices and Wages page (from the History of England podcast site) notes that an unskilled labourer might earn two pence (2d) per working day in 1300. A six-day week would thus earn him 12d, or 1 shilling per week. This is 52 shillings, or 624d per annum.

Even further down the hierarchy, a swineherd would earn 0.3d per working day, or about 93d per annum.

Thus, the unskilled labourer earned about 7 times as much as the swineherd.

So, I think we can reasonably conclude that life was much more comfortable for the king than it was for the swineherd!