Microsoft, #1 Word Processor, and #1 Spread Sheet Program. How did they ascend? [closed]

Microsoft has the #1 Word Processor(Word), the #1 spread sheet program(excel) for nearly 30 years. These programs became #1 in their niches prior to being bundled together in Microsoft Office. Microsoft supplanted different established, industry leaders in their respective niches; nearly simultaneously. How did Microsoft accomplish that?

Microsoft basically took advantage of the growth: it bundled Word and Excel into as many new PCs as it could.

In the early days of the PC, growth was so phenomenal that more new PCs were sometimes sold in a year than in the history of computers.

In such a context, if you bundle your software with every PC sold (in exchange for, say, Windows), you'll have over 50% of the market installed next year, over 75% in two years, etc. It doesn't matter if your product isn't better or perfect - it'll be good enough for many.

(And by around windows 3.1, both pieces of software were decidedly better if memory serves me well. Then again I wasn't playing around with the alternatives much.)

Microsoft went for the users, at home. Not companies. That too, of course. But conquering the home market was the priority. Their strategy was that once people start working with MS Office products at home, they would ask for it in the company. This really worked.

Word Perfect missed the step from DOS to Win 3. Lotus 1,2,3 was the default spreadsheet for most companies in Win 3. Ami Pro was their word processor, and very, very good.

Then Win 95 came out. The Lotus company did the opposite of Microsoft; they completely re-wrote their software and focused entirely on business usage. so much so, that even I thought: well, if I have to learn everything all over again, I might as well switch to MS. Probably lots of people thought the same thing, because Lotus vanished in a short time.

Microsoft did rig the odds very much in their favor: third parties didn't get all the information they needed to make competitive software. The real goodies were kept for MS Office products.

Microsoft rigged whatever was possible. For example, their browser was, initially, separate from the OS. When they tried to kill Netscape (Now Mozilla) by giving the browser away for free, they ran into trouble. This wasn't allowed. So they re-engineered the browser to integrate it in the OS. Problem was that it didn't work on the first congressional hearing. Senators are usually dumb as shit, so they allowed another hearing to give MS the opportunity to work out the bugs. In effect, it was like giving a burglar a second chance to successfully get away with the loot.

Back then the OS still had to be installed manually on either an IBM PC or clone. PC DOS for IBM PCs. MS DOS for clones. Then Windows was installed from separate disks also manually not pre installed.

Back then hard disk space was rare. And measured in megabytes not gigabytes. If you had installed Windows 1.x, many did not. But if you did install windows 1.x you probably deleted it shortly after checking it out. because it took up disk space and while pretty and cool there wasn’t much you could do with it. With Windows 2.0 it became more practical as you could actually do a few things with it. But word processing and spreadsheets in windows natively was all Microsoft.

windows 2.x was the first package which I could justify leaving installed. Windows 3.0 and especially windows 3.1 would become ubiquitous with Dos. Which remained a separate product until Windows 95.

Microsoft misled their competition. Microsoft said Microsoft Windows wasn't going to be a pursued product line. That OS/2 was going to be the OS branch which would get the majority their developers attention and improvements. This caused their competition to wast time and resources developing OS/2 products which had no hope of market penetration. Then Microsoft did exactly what they said they would not. They did not pursue OS/2 and they made massive investments in Windows.

In a Joint Memo with IBM 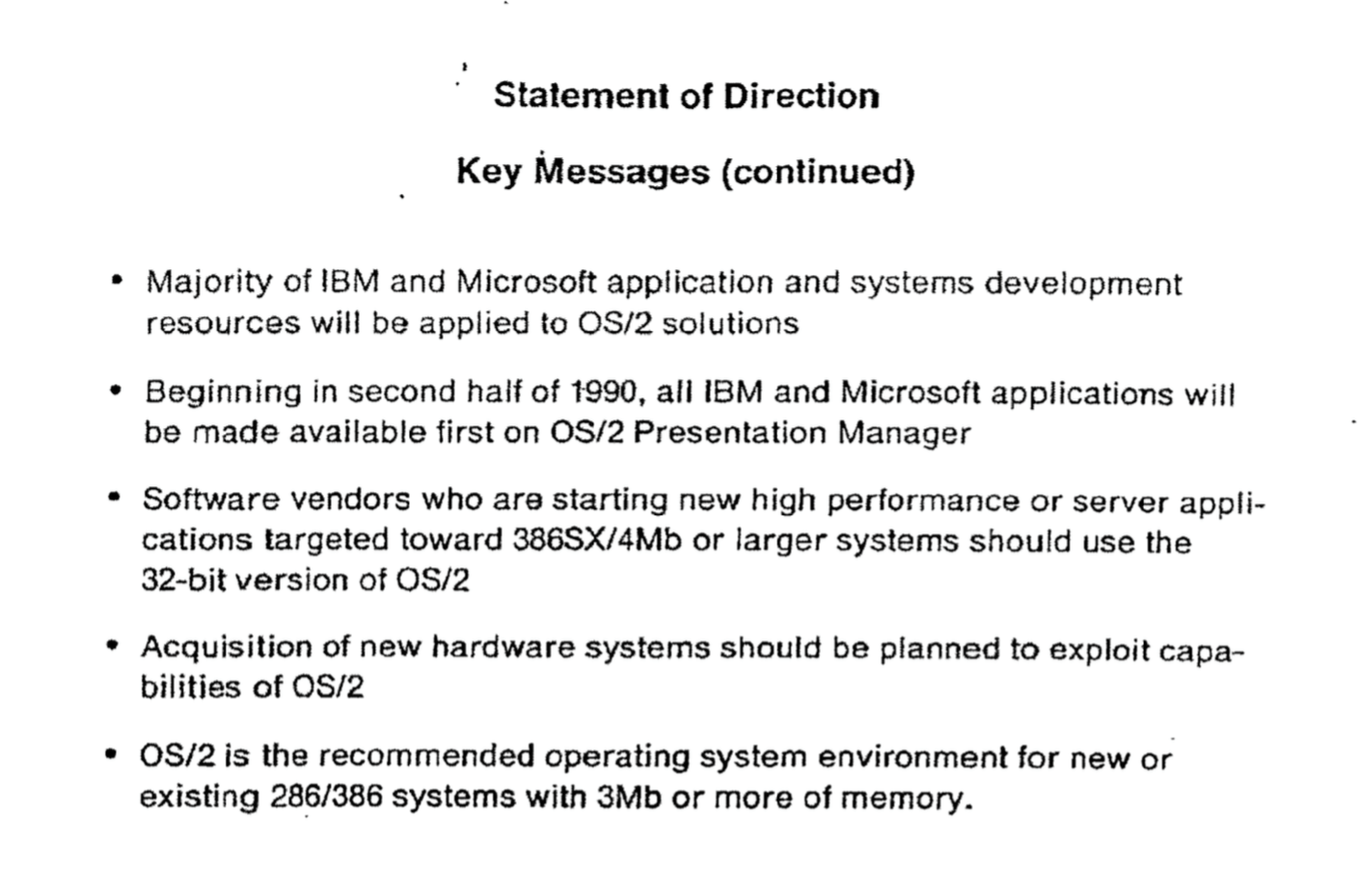 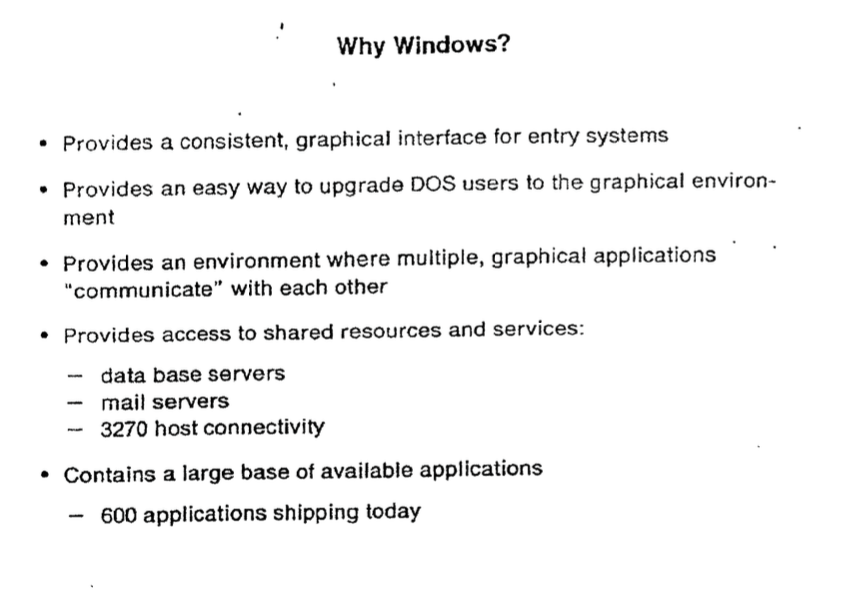 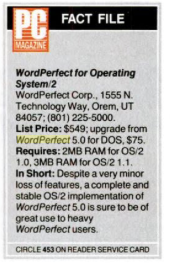 Only Microsoft was developing versions and continuous improvements on it's Windows platform and when that Platform matured.. They were the only ones with Word Processing and Spreadsheet offerings.

The beginnings of Microsoft's Troubles with the FCC. Microsoft would eventually be found a Predatory Monopoly. 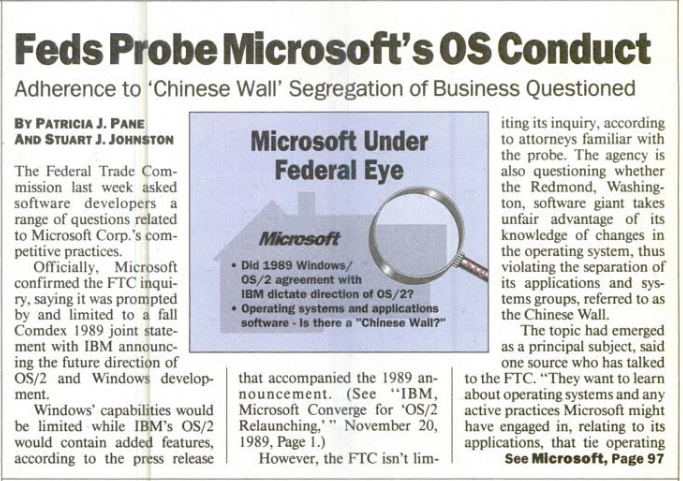 Microsoft In Inquiry By F.T.C.

Microsoft shares plummeted Monday after Rick Sherlund, an analyst with Goldman, Sachs & Company, issued a report on the F.T.C. investigation. Mr. Sherlund said the chief executives of several competing companies had told him they had been reached by the F.T.C. The Lotus Development Corporation confirmed today that the F.T.C. got in touch with it six weeks ago and that it was cooperating with the commission.

There would be many of these kinds of Behaviors from Microsoft. Where Microsoft leveraged OS capabilities to gain and maintain a dominant predatory position in the software market.

Microsoft would eventually be found guilty in Federal Court of being a Predatory Monopoly.

predatory and anticompetitive behavior and kept ''an oppressive thumb on the scale of competitive fortune,''

Not the answer you're looking for? Browse other questions tagged contemporary-history business-history computers or ask your own question.

15
Where and how did the concept of “incorporation” originate?
2
Harvard Architecture: How did Harvard Mark I separate data and instruction?
13
When did retailers stop wrapping purchases in paper and twine?
6
How did IKEA design evolve?
15
How did Saudi Arabia become and remain strongly Wahhabi?
5
How did women's roles and rights change during the early Republican period in China?
5
Why, and how, did chain stores come into being?